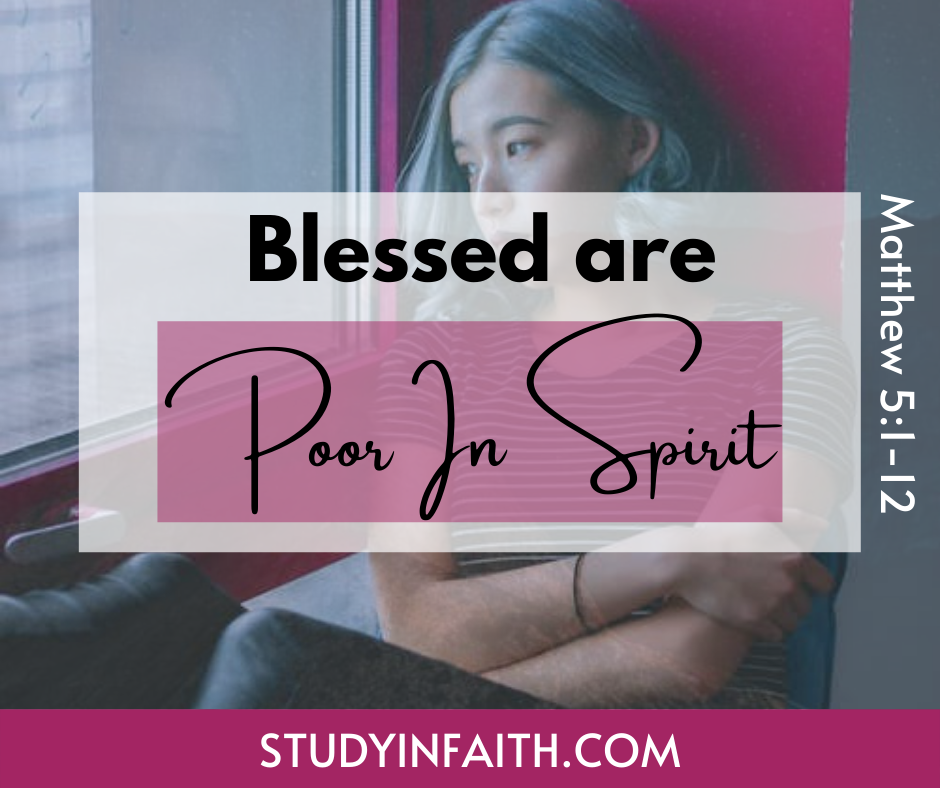 The previous Bible Study highlighted the many different events that led up to this time when Jesus began to speak to large gatherings of people. As a reminder he approached his ministry of teaching, preaching and healing before starting with this opening phrase of blessed are the poor in spirit.

One might ask why he would have commenced his teaching around various states of emotion or afflictions of people such as “poor in spirit”, “mourn”, “persecuted”, “hunger and thirst”, “reviled and persecuted”? In addition to this, he spoke about certain character traits or dispositions such as being “meek”, “merciful”, “pure in heart”, and “peacemaker”. Admittedly, as the Son of God, he would be aware of everything but perhaps he was intuitively reading the people from that time. After all, he had already traveled various parts of Galilee teaching, preaching and healing. He would have been fully aware of the challenges of the Israelites in various regions.

Perhaps though, he was also speaking to humanity for all time, since his words bear relevance as much to the people from that period as they do to people of today. Interestingly, each one of the emotions, afflictions and character traits are matched and aligned with words of encouragement from Jesus. Most, if not all of the blessed phrases have correlation to other scripture from both the Old and New Testament, thus strengthening their relevance and congruency of message throughout. Let us now explore further for better understanding of the phrase blessed are the poor in spirit.

Poor in spirit for example, can be referenced in the Psalms of King David, “The sacrifices of God [are] a broken spirit: a broken and a contrite heart, O God, thou wilt not despise.” [Ps. 51:17] Similar themes are found in other Psalms, “The LORD [is] nigh unto them that are of a broken heart; and saveth such as be of a contrite spirit. Many [are] the afflictions of the righteous: but the LORD delivereth him out of them all.” [Ps. 34:18-19]

The ancient prophets also highlighted the importance of having this humility in spirit for those seeking God, “For thus saith the high and lofty One that inhabiteth eternity, whose name [is] Holy; I dwell in the high and holy [place,] with him also [that is] of a contrite and humble spirit, to revive the spirit of the humble, and to revive the heart of the contrite ones.” [Is. 57:15] Notice the frequency and repetition of words such as contrite, humble, broken.

The word “poor” in general was typically defined as a beggar or pauper from that time. But when used in the context by Jesus, it is more akin to how it is referenced in the Psalms and Isaiah as shown above. A broken spirit and a contrite heart parallels with the phrase poor in spirit and indicates many things such as conviction of conscience, a sense of remorse, guilt, a sense of sorrow, or a desire to be restored to God, or even wanting to come to God, even for the first time.

Antithesis of Poor in Spirit

Perhaps looking at the opposite of this disposition in scripture it will help to see it in a different light. Words such as haughty and pride, are indicative of having a sense of self sufficiency and boastfulness, “Pride [goeth] before destruction, and an haughty spirit before a fall. Better [it is to be] of an humble spirit with the lowly, than to divide the spoil with the proud.” [ Prov. 16:18-19]

Once again, the prophet Isaiah also echoes this same theme, “…and the high ones of stature [shall be] hewn down, and the haughty shall be humbled.” [Is. 10:33b] Focusing in on the word pride and in this context it implies a sense of arrogance or loftiness, this stands in stark contrast to being poor in spirit, “The wicked, through the pride of his countenance, will not seek [after God:] God [is] not in all his thoughts.” [Ps. 10:4]

God is clearly not looking for people who think they can work their way to the kingdom of heaven on their own accord, merit or works. The apostle Paul helps to clarify, “That no flesh should glory in his presence.” [1 Cor. 1:29] Paul further notes that there is no saving grace in people’s own works, “For by grace are ye saved through faith; and that not of yourselves: [it is] the gift of God: Not of works, lest any man should boast. ” [Eph. 2:8-9]

Consider also that the “poor in spirit” expressed by Jesus may also have been in response to the spiritual apathy he experienced from people during his travels, “Then began he to upbraid the cities wherein most of his mighty works were done, because they repented not: Woe unto thee, Chorazin! woe unto thee, Bethsaida! for if the mighty works, which were done in you, had been done in Tyre and Sidon, they would have repented long ago in sackcloth and ashes.” [Matt. 11:20-21]

The humility of spirit God is seeking in people is also not to be construed as something ensconced in some form of extreme asceticism where self denial and self mortification become principal objectives. Being poor in spirit is more like realizing that God almighty is the all knowing, all present, all powerful, creator of heaven and earth and our place in his presence should be one of respect, humility and repentance, “Humble yourselves therefore under the mighty hand of God, that he may exalt you in due time: Casting all your care upon him; for he careth for you.” [1 Pet. 5:6-7]

In a previous Bible Study, it was noted of the many contrasts Jesus spoke about while conveying his messages by placing one position against another position. The blessed phrases are similar in approach where one position, i.e. “poor in spirit” is associated with the “kingdom of heaven”.

In closing off this Bible Study on blessed are the poor in spirit, it is easy to read through these verses quickly and to then move on with the busyness of life, without giving them further thought. The profound correlation of humility of spirit to the kingdom of heaven however requires further contemplative consideration. Think about the people came to see Jesus, to hear his teaching and preaching, to possibly become healed of physical or mental afflictions by him. Many of them traveled for more than thirty hours by foot or animal, “And there followed him great multitudes of people from Galilee, and [from] Decapolis, and [from] Jerusalem, and [from] Judaea, and [from] beyond Jordan.” [Matt. 4:25] Perhaps some of them may have simply followed the crowd out of curiosity, having never truly heard the message of conviction from Jesus and then just going back to their daily lives.

This initial message of blessed are the poor in spirit as shared by Jesus is somewhat similar to this lengthy parable noted in its entirety for proper context,

This parable will receive its own due study in the future but for now, consider this as an opportunity to seek God in prayer on how you can become the proverbial good and receptive ground to hear his word; bearing fruit befitting for the kingdom of heaven. The good and receptive ground often starts with those same character traits from above; contrite, humble, and broken hearted. That becomes the proverbial fertile soil for God’s word to take root in your heart. With the opening statement from his sermon on the mount being poor in spirit, this can indeed be a blessed experience, for theirs is the kingdom of heaven!