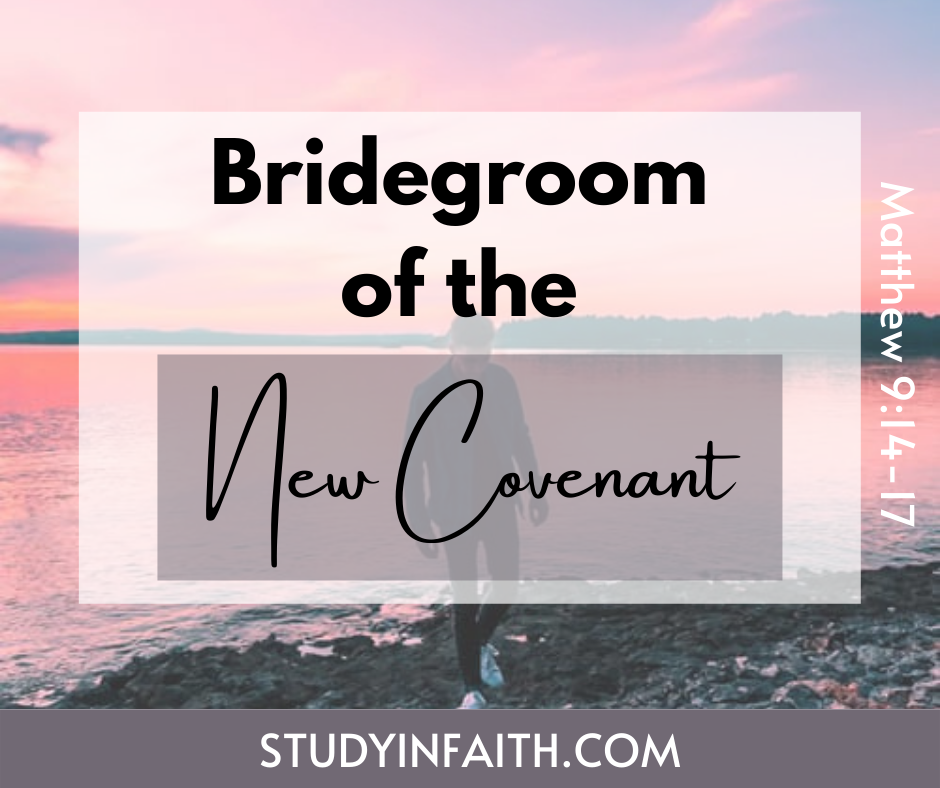 Then came to him the disciples of John, saying, Why do we and the Pharisees fast oft, but thy disciples fast not? And Jesus said unto them, Can the children of the bridechamber mourn, as long as the bridegroom is with them? but the days will come, when the bridegroom shall be taken from them, and then shall they fast.

This section of scripture on the bridegroom of the new covenant is also recorded in the gospel accounts from both Mark and Luke. It involves a query from the disciples of John the Baptist with Jesus. The question from them was over fasting and was possibly influenced by the Pharisees since they also were referenced in the question. The response from Jesus though bears the more notable and compelling point found in this scripture reading.

The use of the word bridechamber is interestingly only recorded here in scripture for this particular event as noted in three gospel accounts. It is therefore not a frequently used word but in this instance it is referring to people following Jesus who is himself described as the bridegroom. There are also very few uses of the phrase bridegroom in scripture, twenty-three in fact throughout the Old and New Testaments. It is notable that most references of this phrase are documented in the prophetic writings of Isaiah, Jeremiah, Joel and Revelation. Take for example the comparable simile, “For [as] a young man marrieth a virgin, [so] shall thy sons marry thee: and [as] the bridegroom rejoiceth over the bride, [so] shall thy God rejoice over thee.” [Is. 62:5]

On a previous occasion, John the Baptist referred to Jesus as the bridegroom while responding to a discussion with the Jews about purifying. John endeavoured to bring the focus of attention onto Jesus as he responded with this encompassing message, “Ye yourselves bear me witness, that I said, I am not the Christ, but that I am sent before him. He that hath the bride is the bridegroom: but the friend of the bridegroom, which standeth and heareth him, rejoiceth greatly because of the bridegroom’s voice: this my joy therefore is fulfilled.” [John 2:28-29] Again in this reference, the bride represents the followers of Christ with himself being called the bridegroom.

Jesus further used the phrase bridegroom of the new covenant while describing what the kingdom of heaven is like when speaking with the multitudes. His illustration involved ten people, five of whom were wise and five of whom were foolish in their preparation to meet the coming bridegroom (Christ). As the bridegroom arrived, the five wise people were welcomed as brides into the marriage with the bridegroom but the five foolish people were shut out from entering in with the Lord’s reply, “Watch therefore, for ye know neither the day nor the hour wherein the Son of man cometh.” [Matt. 25:13]

With some measure of clarity provided on the bridegroom as the Lord Jesus Christ, and the bride or bridechamber as believers in Christ, let us now move on to the two examples Jesus provided in his response. Both were fairly common sense illustrations with the first one involving the sewing or stitching of new cloth into an old garment, or one that had already shrunk from washing and drying multiple times. The subsequent shrinking of the new cloth would indeed tear the old garment.

Similarly, new wine poured into old wine bottles or wineskins, would cause the skins to burst from continued fermentation. But Jesus was not merely advising the crowd on proper clothing and wine making techniques, he was rather contrasting the old with the new religion. In this case, the illustrations point people to the contrast between the old covenant, or Old Testament and the new covenant, or New Testament. This is a rather complex subject but Paul, the writer of Hebrews provides some of the best material for understanding the bridegroom of the new covenant.

Hebrews contains an extensive discourse that transitions back and forth, between the old and new covenants, specifically tailored to the Hebrew people who were adherents to the Jewish faith. Paul commences his lengthy letter by drawing a distinction between the old and new with the old covenant coming from the Father and the prophets and the new covenant coming from the Son, as set forth.

God, who at sundry times and in divers manners spake in time past unto the fathers by the prophets, Hath in these last days spoken unto us by [his] Son, whom he hath appointed heir of all things, by whom also he made the worlds; Who being the brightness of [his] glory, and the express image of his person, and upholding all things by the word of his power, when he had by himself purged our sins, sat down on the right hand of the Majesty on high.

The author continues on by highlighting the uniqueness of the Son of God through his deity, power and presence, thus establishing his authority as the bridegroom of the new covenant. As the letter unfolds in great detail outlining the many differences between the old and new covenants, key messages are brought to light such as this Lord’s proclamation.

Paul then continues on by making the bold statement of the new covenant replacing that of the old covenant, “In that he saith, A new [covenant,] he hath made the first old. Now that which decayeth and waxeth old [is] ready to vanish away.” [Heb. 8:13]

The Bridegroom of the New Covenant

Paul then eclipses his summation by highlighting once again the position of Christ as the central person in this new covenant, “So Christ was once offered to bear the sins of many; and unto them that look for him shall he appear the second time without sin unto salvation.” [Heb. 9:28] This same message is then reinforced again and circles back to verse three from Hebrews noted earlier, “But this man, after he had offered one sacrifice for sins for ever, sat down on the right hand of God.” [Heb. 10:12] Clearly, Jesus therefore is clearly the bridegroom of the new covenant in the Bible.

In another pivotal letter from the apostle Paul, he helped to articulate that Christ, as the central figure of the new covenant, was now the end of the old covenant or the Mosaic law, “For Christ [is] the end of the law for righteousness to every one that believeth.” [Rom. 10:4] This would indeed have been a very bold message to convey to believers and followers of Judaism where the old covenant and law had prevailed for centuries within their culture.

The correlating examples used by Jesus in this week’s scripture study start to come into perspective in that the gospel of the Lord Jesus Christ is not merely something that supplements Judaism. The new covenant rather creates new people spiritually in Christ as Paul shared, “Therefore if any man [be] in Christ, [he is] a new creature: old things are passed away; behold, all things are become new.” [2 Cor. 5:17] Christianity is completely different than the Jewish religion in that it is through faith in the saving grace of the Lord Jesus Christ.

Paul also coined this memorable verse in one of his other letters, further illustrating how the new has clearly replaced the old, “I am crucified with Christ: nevertheless I live; yet not I, but Christ liveth in me: and the life which I now live in the flesh I live by the faith of the Son of God, who loved me, and gave himself for me.” [Gal. 2:20] As Paul wrote on this same theme in the book of Romans, he then ties in both the old (law and the prophets) with the new (the Lord Jesus Christ), where the righteousness of God is now imputed by faith, “But now the righteousness of God without the law is manifested, being witnessed by the law and the prophets; Even the righteousness of God [which is] by faith of Jesus Christ unto all and upon all them that believe.” [Rom. 3:21-22]

To close off this Bible study on the bridegroom of the new covenant, this seemingly simple illustration from Jesus alludes to something far more complex with his apostles later writing substantially to explain the distinction between the old and new covenants. In short, this pertains to the older religion of the Mosaic law coming to an end. It is now replaced by a new relationship in Christ through faith in his sacrificial act for atonement of people’s sins. The new covenant is not an admixture of the old and the new combined together but answers the question of why is Jesus the bridegroom of the new covenant. As Jesus pointed out with old and new garments and old wineskins and new wine, it is a completely new covenant.

Paul once again wrote of this in his letter to believers, “Wherefore the law was our schoolmaster [to bring us] unto Christ, that we might be justified by faith. But after that faith is come, we are no longer under a schoolmaster. For ye are all the children of God by faith in Christ Jesus.” [Gal. 3:24-26] To conclude, Christ is the bridegroom of the new covenant and no greater joy awaits seekers of faith than to become part of his bridechamber awaiting for his return.

As the apostle John once wrote, it is with earnest prayer for seekers to come to saving faith in Christ, for he is indeed the giver of eternal life, “And I give unto them eternal life; and they shall never perish, neither shall any [man] pluck them out of my hand. My Father, which gave [them] me, is greater than all; and no [man] is able to pluck [them] out of my Father’s hand. I and [my] Father are one.” [John 10:28-30]