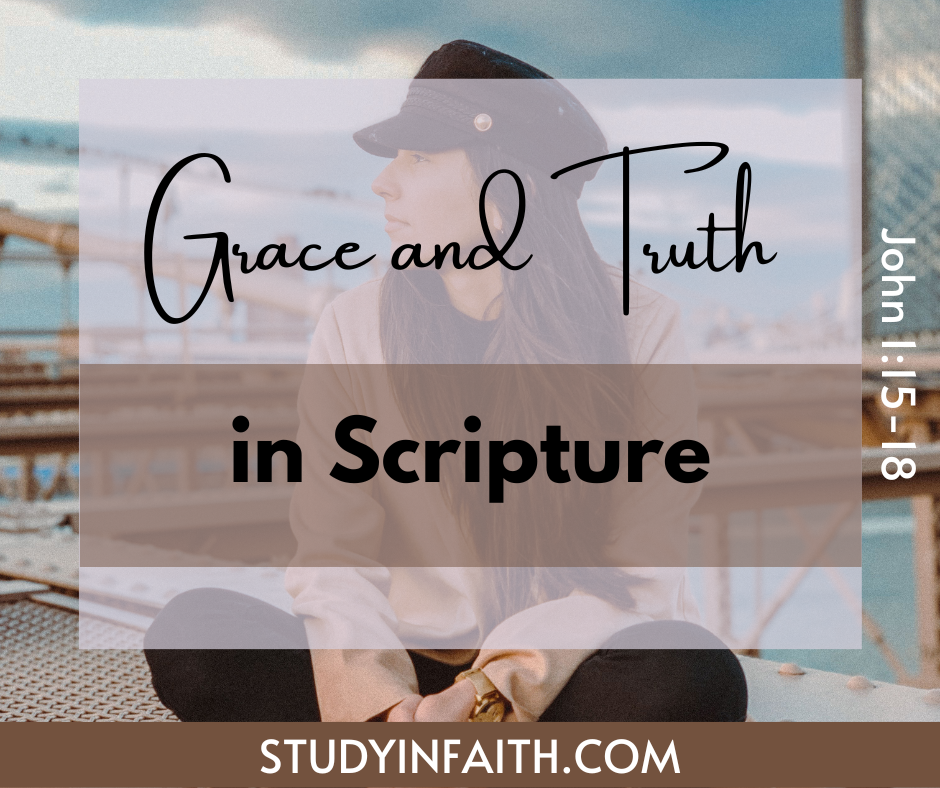 John bare witness of him, and cried, saying, This was he of whom I spake, He that cometh after me is preferred before me: for he was before me. And of his fulness have all we received, and grace for grace. For the law was given by Moses, [but] grace and truth came by Jesus Christ. No man hath seen God at any time; the only begotten Son, which is in the bosom of the Father, he hath declared [him.

In this Bible study on grace and truth in scripture, the apostle John introduces two individuals within the first chapter of his gospel account. They are Jesus Christ, the Son of God and John who later became known as the baptist since his mandate was to baptize people in water as a sign of repentance. While both Jesus and John commenced their earthly ministry with the same message, repent for the kingdom of heaven is at hand, it was John who clarified the baptism from him in comparison to Jesus when he said, “I indeed baptize you with water unto repentance: but he that cometh after me is mightier than I, whose shoes I am not worthy to bear: he shall baptize you with the Holy Ghost, and with fire:” [Matt. 3:11]

This section of scripture is noteworthy for many reasons. John the Baptist highlights the fact that Jesus is more important than him and that he existed before him which is referenced further in a previous Bible study called In the beginning was the Word. In addition, John seeks to distinguish the difference between the teachings of Moses and the teachings of Jesus. He does this by stating that the law, otherwise known as the keeping of the commandments, came from Moses. But now with Jesus coming to the point of his presence on earth and mission, the ministry of grace and truth is introduced out to the multitudes. This proved to be a tremendous stumblingblock for the religious leaders of that day, known as the scribes and the Pharisees since they thrived on holding power and authority over the people by invoking not only the law but also their self imposed traditions which often usurped the Mosaic law.

What does grace mean?

With that opening pretext on grace and truth in scripture, we will now delve deeper into one key word, grace, as proclaimed by John the Baptist, as recorded by the apostle John in his gospel account and fulfilled by Jesus Christ, “And of his fulness have all we received, and grace for grace.” [John 1:16] But what did John mean when he said grace and truth came by Jesus Christ? What exactly is grace and truth and how does it differ from the law that was given by Moses? For this, we will explore and expound upon scripture from many books of the Bible to better understand the distinction from John and what it means for seekers of faith. Let us start out first by having a look at some relevant and related verses of scripture pertaining to the grace that comes from Jesus Christ.

In many respects, grace can be defined as the mercy and favour of God as noted in the book of Acts, “But we believe that through the grace of the Lord Jesus Christ we shall be saved, even as they.” {Acts 15:11]. This means the incomprehensible pardon that God bestows upon us to not only atone for but to forgive our sins through the Lord Jesus Christ. This gracious act of God, or immeasurable grace, is placed upon us when our sins are atoned for by Jesus and his righteousness is placed upon us as Paul portrayed in this passage, “For he hath made him to be sin for us, who knew no sin; that we might be made the righteousness of God in him.” [2 Cor. 5:21] This is the grace of God in action when we come to him by faith and believe in the atoning sacrifice of his Son who paid the penalty for our own sins. That is grace immeasurable, unexplainable and indeed unfathomable! This is why Paul describes the gospel as “…the gospel of the grace of God.” [Acts 20:24]

The grace of God merits underscoring further since the entire premise of the gospel message is founded upon the grace of God. Consider how Paul elaborates more deeply on the grace of God in his profound writings found in the letter written to the early church in Rome. Paul starts out early in his letter, obviously intended primarily for a Jewish audience intent on keeping the Mosaic law, by stating that there is no righteousness found by keeping the law. He contrasts the righteousness that can come only from God against those who insist on keeping the old letter of the law by saying, “But now the righteousness of God without the law is manifested, being witnessed by the law and the prophets;” [Rom. 3:21] This is where righteousness comes from, through the Lord Jesus Christ and Paul expounds upon this in his letter to Titus again emphasizing the grace, kindness and love of God.

“But after that the kindness and love of God our Saviour toward man appeared, Not by works of righteousness which we have done, but according to his mercy he saved us, by the washing of regeneration, and renewing of the Holy Ghost; Which he shed on us abundantly through Jesus Christ our Saviour; That being justified by his grace, we should be made heirs according to the hope of eternal life.”

Justified by his grace

To jump back again to Romans, Paul helps to illustrate these points and note the key words in this passage, righteousness, faith, believe, justified, grace, “Even the righteousness of God which is by faith of Jesus Christ unto all and upon all them that believe: for there is no difference: For all have sinned, and come short of the glory of God; Being justified freely by his grace through the redemption that is in Christ Jesus:” [Rom 3:22-24] Paul continues on with his letter to describe the profound impact and importance grace has upon a believer’s life and he does this with an incredible juxtaposing statement, “That as sin hath reigned unto death, even so might grace reign through righteousness unto eternal life by Jesus Christ our Lord.” [Rom. 5;21] What a remarkable contrast for seekers of faith to ponder; sin reigns until death but grace reigns through righteousness until eternal life!

Here is the key point dear readers, we are saved by God’s grace, it is his mercy and his favour alone. It is only through faith and by believing in the atoning work of the Lord Jesus Christ. Note how Paul refutes any human attempt at self-salvation by stating, “For by grace are ye saved through faith; and that not of yourselves: it is the gift of God:” [Eph. 2:8] This is the gospel message, the gospel of grace and the New Testament presents this message of grace from book to book linking the continuity of this theme right to the last verse of the Bible when the apostle John closes his writings with the proclamation, “The grace of our Lord Jesus Christ be with you all. Amen.” [Rev. 22:21] There is no other way under heaven by which we are saved from the penalty of our sins (Acts 4:12). This is why Jesus proclaimed to the multitudes, “I am the way, the truth, and the life: no man cometh unto the Father, but by me.” [John 14:6b]

Let us close of this study on grace and truth in scripture. Will you accept his free gift of grace for your life? He is offering all who come to him as the scriptures describe it, whosoever will come (Rom.10:13). This is the message of the well known and often quoted verse from the gospel according to John, “For God so loved the world, that he gave his only begotten Son, that whosoever believeth in him should not perish, but have everlasting life.” [John 3:16] God’s love, God’s grace, through his Son and all you need to do is believe on him now. Why not make the decision that will last for eternity and come to him by faith and receive his grace upon your life, now and forever! He is knocking at your heart right now (Rev. 3:20).