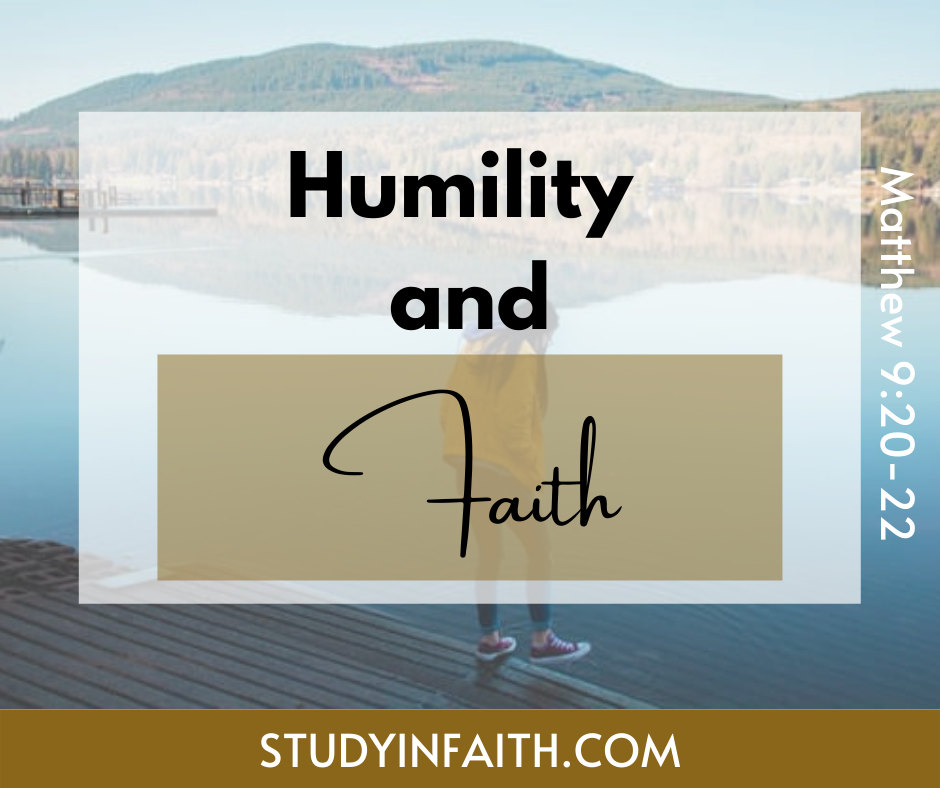 And, behold, a woman, which was diseased with an issue of blood twelve years, came behind [him,] and touched the hem of his garment: For she said within herself, If I may but touch his garment, I shall be whole. But Jesus turned him about, and when he saw her, he said, Daughter, be of good comfort; thy faith hath made thee whole. And the woman was made whole from that hour.

An Issue of Blood

Much like the person with leprosy though whom Jesus touched, here is yet another show of compassion upon a person, suffering from ailment. The woman was categorized as unclean, considered to defile places of worship and yet here is Jesus responding to her, “Daughter, be of good comfort; thy faith hath made thee whole.” Contrast that with recent accusations from the religious rulers called the Pharisees who condemned Jesus, “And when the Pharisees saw [it,] they said unto his disciples, Why eateth your Master with publicans and sinners? ” [Matt. 9:11] Here though was a remarkable display from Jesus of mercy similarly portrayed like the good Samaritan from Luke 10:37.

Details of the Event

Since this event is also recorded by Mark and Luke it allows us to explore what took place in more detail. Mark noted some additional information about the woman by saying that she, “…had suffered many things of many physicians, and had spent all that she had, and was nothing bettered, but rather grew worse.” [Mark. 5:26] This detailed account was also recorded in Luke 8 helping to further confirm the information. Clearly, this woman was desperately in need of healing after having exhausted help from many physicians and spending what was likely limited means given her place in society as unclean.

Now keep in mind that this took place just before Jesus brought Jairus’ daughter back to life, therefore the circumstances were noted as he walked to Jairus’ house, “But as he went the people thronged him.” [Luke 8:24b] This means a great crowd of people followed and surrounded Jesus while he was walking. This did not dissuade the woman with an issue of blood however since her actions at that moment stated that, “When she had heard of Jesus, came in the press behind, and touched his garment.” [Mark 5:27]

Now comes the incredible moment of faith recorded above in this week’s scripture reading from Matt. 9:21 and also confirmed in Mark 5:28 and Luke 8:44, “If I may but touch his garment, I shall be whole.” [Luke 8:44] Luke states it as the border of his garment. What remarkable humility and faith in that she did not call out to Jesus as many did (Matt. 15:22), or try to speak with him, or even touch him physically. It was rather a display of such humility, perhaps caused by her stigma of uncleanness. This is followed by her astonishing faith in thinking that she would be made whole, simply by touching the hem of his garment!

Luke records further details at this point as Jesus then says to his disciples, “Who touched me? ” [Luke 8:45] After that, it was noted that all of the people denied touching him followed by Peter saying, “Master, the multitude throng thee and press [thee,] and sayest thou, Who touched me? ” [Luke 8:45b] Here is the notable part of this event since Jesus knew somebody had touched him (or his garment) because he then stated, “…Somebody hath touched me: for I perceive that virtue is gone out of me.” [Luke 8:46] In this instance, virtue meant his miraculous divine power as the Son of God.

As the event unfolds with Jesus looking around at the crowd, the woman out of conviction then came forward as documented, “And when the woman saw that she was not hid, she came trembling, and falling down before  him, she declared unto him before all the people for what cause she had touched him and how she was healed immediately.” [Luke 8:47] Three gospel accounts record the immediate healing of this woman after touching the hem of Jesus’ garment. In reading other accounts of a similar nature, this was likely not the first case of someone merely touching him or his garments for healing. Luke also made note of this just prior to Jesus commencing his sermon on the mount in, “And the whole multitude sought to touch him: for there went virtue out of him, and healed [them] all.” [Luke 6:19]

After the woman came forward in humility and faith, there is a show of compassion from Jesus. He comforts her with kind, reassuring words and highlights how her faith in him was material to her healing. This compassionate nature of Jesus is later reflected in his memorable expression to his disciples, “Come unto me, all [ye] that labour and are heavy laden, and I will give you rest. Take my yoke upon you, and learn of me; for I am meek and lowly in heart: and ye shall find rest unto your souls. For my yoke [is] easy, and my burden is light.” [Matt. 11:28-29]

In retrospect, what can we now make of this and other events where miraculous healings took place from people who approached Jesus. In most cases throughout scripture, the people who came to him were like this description from a previous study, “But when Jesus heard [that,] he said unto them, They that be whole need not a physician, but they that are sick.” [Matt. 9:12] Not only were many of them physically sick but all of them were spiritually sick from their inborn sin nature. Quite possibly, it was their own conviction over sin that brought them to Jesus in the first place.

This was perhaps illustrated with the man sick of the palsy who was brought to him and Jesus said to him, “…and Jesus seeing their faith said unto the sick of the palsy; Son, be of good cheer; thy sins be forgiven thee.” [Matt. 9:2b] Consider in contrast though, that many people would have nothing to do with him and actually wanted to persecute and kill him within the Jewish community. As Jesus spoke to them he once shared a compelling message of who he was but then concluded it by knowing full well of their evil intent, “Search the scriptures; for in them ye think ye have eternal life: and they are they which testify of me. And ye will not come to me, that ye might have life.” [John 5:39-40]

To close off this study on humility and faith, perhaps now is the time to ask readers, have you ever approached Jesus in this manner with such contrite humility and unwavering faith? As mentioned above, it was typically the people who saw their own need and took it upon themselves to come to him while he was right there in the community. Granted, Jesus is not physically present in human form as he was back then but he is only a prayer away from you right now in spirit. God’s word expresses this same message of coming to him now, rather than later, “(For he saith, I have heard thee in a time accepted, and in the day of salvation have I succoured thee: behold, now [is] the accepted time; behold, now [is] the day of salvation.) ” [2 Cor. 6:2]

Jesus is the one who offers living water freely to everyone as he expressed to the woman of Samaria at Jacob’s well, “Jesus answered and said unto her, If thou knewest the gift of God, and who it is that saith to thee, Give me to drink; thou wouldest have asked of him, and he would have given thee living water.” [John 4:10] This is the life Jesus was speaking to the Jews about and whether expressed literally or figuratively as living water, the message remains the same; he is the giver of eternal life. Jesus stated this explicitly in his message to the Jews by the temple in Solomn’s porch, “And I give unto them eternal life; and they shall never perish, neither shall any [man] pluck them out of my hand. My Father, which gave [them] me, is greater than all; and no [man] is able to pluck [them] out of my Father’s hand. I and [my] Father are one.” [John 10:28-29]

For seekers of faith, why not take this opportunity now, come and touch the proverbial hem of his garment by coming to him in faith and prayer. As the apostle Paul wrote to believers, we are instructed to come before God for all of our needs, “Be careful for nothing; but in every thing by prayer and supplication with thanksgiving let your requests be made known unto God.” [Phil. 4:6-7]