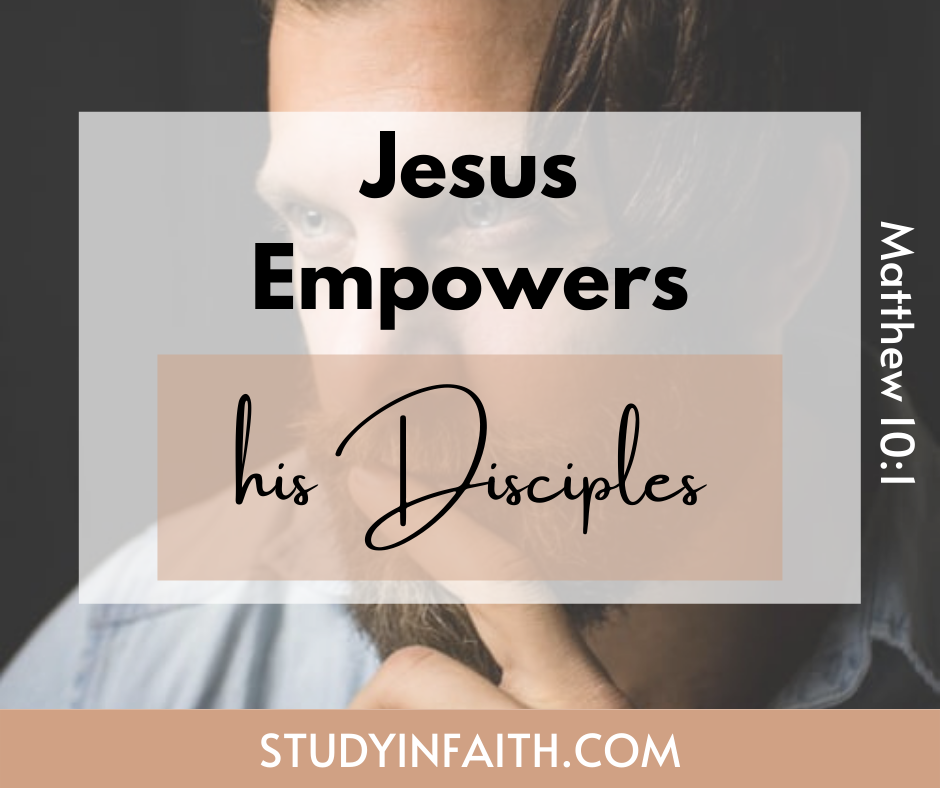 And when he had called unto [him] his twelve disciples, he gave them power [against] unclean spirits, to cast them out, and to heal all manner of sickness and all manner of disease.

This short verse on Jesus empowers his disciples is also recorded in Mark and Luke further substantiating the event. There are many notable points worth highlighting. The first one to note is that Jesus calls twelve men to be his closest disciples and they become otherwise known as the twelve apostles (Luke 6:13). He doesn’t call nine, or ten or fifteen but twelve. Jesus confirmed that he only chose twelve to be his apostles, “Jesus answered them, Have not I chosen you twelve, and one of you is a devil?” [John 6:70] In scripture, they were often nicknamed “the twelve” as noted in Mark 6:7.

Interestingly, twelve is a number that stands out in many places throughout scripture. Twelve is the number that coincides with the twelve tribes of Israel as first noted in Gen. 49:28 and in the New Testament as shown in Luke 22:30. Also of interest from scripture is that Jacob begat the twelve patriarchs in Acts 7:8 but let’s look at a few more mentions of the number twelve.

Jesus was twelve years old when he went up to Jerusalem with his mother and Joseph in Luke 2:42. After Jesus performed a miracle by creating loaves of bread to feed 5,000 men, plus women and children, the remaining amount was placed in twelve baskets in John 6;13. Jesus stated there are twelve hours in a day in John 11:9. Jesus said there are twelve thrones in heaven in Matt. 19:28. He indicated that he could summon twelve legions of angles to help him in Matt. 26:53. In Revelation, there is a crown of twelve stars, twelve gates with twelve pearls, twelve tribes, twelve foundations and twelve fruits (Rev. 12:1, 21:12, 14, 21, 22:2).

Here are two more references on twelve perhaps simply for interesting trivia on Jesus empowers his disciples. Jesus healed the daughter of a man and her age was twelve (Luke 8:42). The woman who had an issue of blood that was subsequently healed by Jesus suffered for twelve years before the miraculous healing (Luke 8:43). Twelve is indeed an interesting number in scripture but this does not imply nor should it be construed that anything pertaining to twelve is related to each other. This is with the exception of the twelve apostles who will judge the twelve tribes of Israel as noted in both Matt. 19:28, Luke 22:30.

Transitioning from here in this week’s scripture reading, Jesus then empowers the twelve apostles to have authority over unclean or evil spirits. Think about this for a moment. This means they were given power overthe spiritual world and were able to cast devils or unclean spirits out of possessed people. That word unclean is used some 194 times in scripture and specifically pertaining to unclean spirits it is noted close to 25 times in the New Testament. An unclean spirit signifies something that is religiously impure, or more candidly something that is notably filthy or having an innate sense of filthiness. In a previous Bible study called Jesus Casts out Devils there is a direct correlation between devils and demons and unclean spirits. They are all from the same pit of darkness and represent nothing more than the minions of Satan.

Further to this, Jesus empowers his disciples to heal all sick and diseased people whom they encounter during their travels. This means they were given power over physical nature. Note that small word “all” not some, not a few, but all were healed. Much like the empowerment of casting out unclean spirits, they were now empowered to physically heal people. This is not trickery or some form or magic, this is godly empowerment to do good in people who are suffering from physical ailments of any kind. The disciples were not limited by type of affliction or disease but were empowered to heal all sick and diseased people whom they encountered during their travels. Clearly, there were signs and wonders done by the apostles that demonstrates who performed miracles besides Jesus but it was indeed through his empowerment.

With the above stated points, perhaps now is a good time to look at the power of God since this was the source of power given to the disciples. We shall find that this is the same source of power that is given to believers in Christ in their daily walk of faith today. This is noted in the Gospel of John right in the first chapter, “But as many as received him, to them gave he power to become the sons of God, [even] to them that believe on his name.” [John 1:12] It is always interesting to connect the points from these passages. In other words, to whom does Jesus give power to become the sons of God? It is to those who receive him and who believe on his name. It is not by church membership, denomination, good works, etc., it is by receiving and believing on his name.

Let’s dig a little deeper though into scripture and explore the power of Jesus. He once spoke to some of the Pharisees and his disciples and said that he has power over his own life, “No man taketh it from me, but I lay it down of myself. I have power to lay it down, and I have power to take it again.” [John 10:18] Jesus continued on by saying that he received this commandment from his Father. Further on in the book of John, Jesus then commenced a lengthy prayer to the Father and it opens with him confirming that the Father has given him power over all flesh, “As thou hast given him power over all flesh, that he should give eternal life to as many as thou hast given him.” [John 17:2]

The Father and the Son

Do you see what stands out in these texts from the study of Jesus empowers his disciples? The first thing, is the complete interdependence of the Son with the Father. This is illustrated by (1) the commandments given to Jesus from the Father, (2) the power over all flesh given by the Father and (3) that while Jesus gives eternal life he gives it to those the Father has given to him. This is just from a few verses in scripture but this pattern is indicative of the Father and Son relationship throughout the entire Bible. Nothing is done in isolation of each other between the Father and the Son.

Similarly, as believers in Christ there needs to be a complete interdependence of the believer with the Lord Jesus Christ. Christianity is not to be lived in a vacuum of self-will, rather it is to be lived in submission of God’s will for your life. In light of the source of the power, believers in Christ should see it no other other way. All power is given to Jesus in heaven and in earth as stated in Matt. 28:18 and this power is from the Father. This is also how Jesus will ultimately return with power and great glory as noted in Luke 21:27.

The Christ, the Son of God

Let us close of this Bible study on Jesus empowers his disciples with an eclipsing event that took place in the presence of Caiaphas, the high priest. He was the one who questioned Jesus to determine who he was amidst the false allegations from the scribes and Pharisees. Caiaphas finally asked Jesus again in frustration, “But Jesus held his peace. And the high priest answered and said unto him, I adjure thee by the living God, that thou tell us whether thou be the Christ, the Son of God.” [Matt. 26:63]

As you contemplate life as a believer or if you are merely seeking to learn what faith is all about, would you not want to have a faith that is derived from and reliant upon the power of the heavenly Father? This is the omnipotent, omniscient and omnipresent power that sustains all that we can see, hear, feel and sense both physically and spiritually. Why not come to Jesus now by receiving him and believing upon him for as it was previously stated, “to them gave he power to become the Sons of God“!

For reference, here are some frequently asked questions that are answered in this Bible Study. It is with sincere prayer that they have been answered through carefully researched and written commentary for seekers of faith. The absence of answers in the study is perhaps indicative that the events and circumstances were deemed less worthy of documentation in the overall importance of biblical scripture. How did Jesus empower his disciples? What does God say about empowering others? What did Jesus do for his disciples? What was the first thing Jesus taught his disciples? The apostles empowered to work miracles. Jesus and his disciples story. Jesus’ relationship with this disciples.