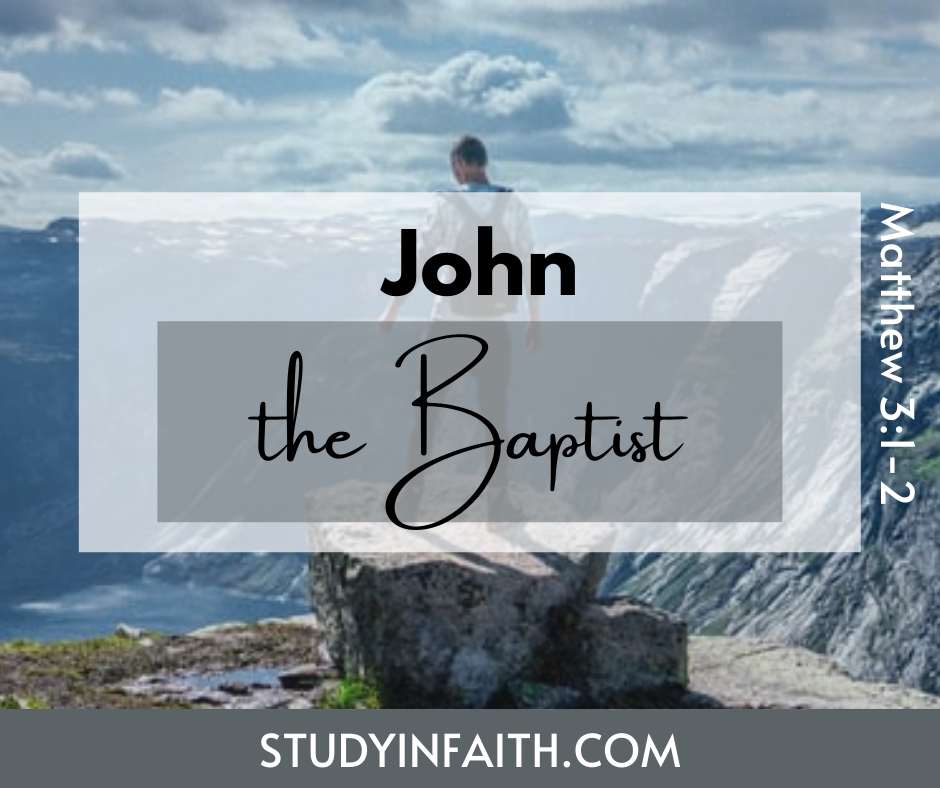 In those days came John the Baptist, preaching in the wilderness of Judaea, And saying, Repent ye: for the kingdom of heaven is at hand.
Matthew 3:1-2

The Forerunner to Jesus

John the Baptist was reminiscent of Old Testament prophets and was the New Testament forerunner in raising awareness among the people over the coming of someone greater than himself, “…he that cometh after me is mightier than I.” [Matt. 3:11] He lived a rather nomadic lifestyle, he was forthright in his speech and did not hesitate to mince words toward the rulers of the Jews; at one time calling them a generation of vipers. His central message mirrored the initial theme to that of Jesus, “…Repent ye: for the kingdom of heaven is at hand.” [Matt. 3:2] This same message was also given by Jesus at the onset of his preaching ministry [Matt. 4:17].

John the Baptist also echoed a similar message to that of the angel of the Lord’s declaration, “…he shall save his people from their sins”, as given to Joseph earlier and now here expressed in like manner by the Baptist in John 1:29, “The next day John seeth Jesus coming unto him, and saith, Behold the Lamb of God, which taketh away the sin of the world.” [John 1:29] Although he only baptized people with water, he foretold of someone coming after him, in reference to Jesus with far greater power and authority, “…the same is he which baptizeth with the Holy Ghost.” [John 1:33b] With this opening context, let us further explore the role of John the Baptist.

John the Baptist’s role was contrasted with the role of Jesus by the apostle, “There was a man sent from God, whose name [was] John. The same came for a witness, to bear witness of the Light, that all [men] through him might believe. He was not that Light, but [was sent] to bear witness of that Light.  [That] was the true Light, which lighteth every man that cometh into the world.” [John 1:6-9] The “Light” noted in this text is referring to none other than Jesus Christ. As John the Baptist commenced his message, he also indicated the pre-existence of him who would follow after him, again in reference to Jesus, “John bare witness of him, and cried, saying, This was he of whom I spake, He that cometh after me is preferred before me: for he was before me.” [John 1:15]

John the Baptist was around the same age as Jesus since Elisabeth his mother was pregnant six months prior to the angel Gabriel announcing to Mary about her virgin birth. All of this is recorded in the first chapter of Luke’s account for reference in the scriptures. But spiritually, Jesus is eternal therefore John the Baptist’s comment reflected this, “…for her was before me.” Later on, during his preaching to the people and when confronted by the religious rulers, he sought to bring further attention to Jesus rather than himself,

“And this is the record of John, when the Jews sent priests and Levites from Jerusalem to ask him, Who art thou? And he confessed, and denied not; but confessed, I am not the Christ. And they asked him, What then? Art thou Elias? And he saith, I am not. Art thou that prophet? And he answered, No. Then said they unto him, Who art thou? that we may give an answer to them that sent us. What sayest thou of thyself? He said, I [am] the voice of one crying in the wilderness, Make straight the way of the Lord, as said the prophet Esaias.” [John 1:19-23]

It was evident that John the Baptist knew his place and position in relation to Jesus and was clearly drawing more attention to Jesus by bringing emphasis upon him to the inquiring Jews, “He must increase, but I [must] decrease.” [John 3:30]

Many statements made by Jesus authenticated the existence and purpose of John the Baptist. During a time when Jesus was conveying a long discourse to the Jews, he validated the ministry of John the Baptist, “There is another that beareth witness of me; and I know that the witness which he witnesseth of me is true. Ye sent unto John, and he bare witness unto the truth.” [John 5:32-33] Following this, Jesus then commended John the Baptist’s ministry, “He was a burning and a shining light: and ye were willing for a season to rejoice in his light.” [John 5:35] Jesus also placed John in high regard with his positional standing, “Verily I say unto you, Among them that are born of women there hath not risen a greater than John the Baptist: notwithstanding he that is least in the kingdom of heaven is greater than he.” [Matt. 11:11]

In general, John the Baptist is referenced by all four writers of the gospels and also throughout Luke’s account in Acts of the Apostles. At times, in the book of Acts there was some confusion among people who had only known of the baptism by John and had not heard of the baptism by Jesus of the Holy Ghost. A Jew named Apollos for example was described as an eloquent man and mighty in the scriptures, “This man was instructed in the way of the Lord; and being fervent in the spirit, he spake and taught diligently the things of the Lord, knowing only the baptism of John.” [Acts 18:25]

This tends to substantiate the impact John the Baptist had on people during his brief ministry who in fact was referred to as even having how own disciples, “Then came to him the disciples of John…” [Matt. 9:14] and in a moment of doubt, John exclaimed to his disciples, “Now when John had heard in the prison the works of Christ, he sent two of his disciples, And said unto him, Art thou he that should come, or do we look for another? ” [Matt. 11:2-3]

The apostle Peter also prefaced an oratory message to the Jews by giving reference to John the Baptist, “That word, [I say,] ye know, which was published throughout all Judaea, and began from Galilee, after the baptism which John preached.” [Acts 10:37] Peter then gave further credence to John’s ministry, “Then remembered I the word of the Lord, how that he said, John indeed baptized with water; but ye shall be baptized with the Holy Ghost.” [Acts 11:16]

Even when the apostle Paul spoke to the men of Israel in a lengthy discourse, he validated John the Baptist’s message, “When John had first preached before his coming the baptism of repentance to all the people of Israel. And as John fulfilled his course, he said, Whom think ye that I am? I am not [he.] But, behold, there cometh one after me, whose shoes of [his] feet I am not worthy to loose.” [Acts 13:24-25] Later on in Paul’s ministry, while speaking to believers in Ephesus, he provided the last reference in the New Testament of John the Baptist, “Then said Paul, John verily baptized with the baptism of repentance, saying unto the people, that they should believe on him which should come after him, that is, on Christ Jesus.” [Acts 19:4]

There are many other notable points about John the Baptist such as his parent’s priestly lineage [Luke 1:5-6], that he shall be great in the sight of the Lord, filled with the Holy Ghost from the womb [Luke 1:15] his usage of the phrase kingdom of heaven, also used by Jesus, and why he led such an obscure life in the wilderness. Further, the angel of the Lord indicated that he would achieve the following mission, “And many of the children of Israel shall he turn to the Lord their God, …to make ready a people prepared for the Lord.” [Luke 1:16-17]

His Fate with Herod

To close off this Bible Study on John the Baptist, it is important to mention his poignant death at the hands of King Herod. This transpired after a bewitching dance took place by the daughter of Herodias, during Herod’s birthday. Following this, Herod made a flippant promise to give the daughter whatever she would ask, up to half his kingdom, but this came with dismal consequences,

“And she, being before instructed of her mother, said, Give me here John Baptist’s head in a charger. And the king was sorry: nevertheless for the oath’s sake, and them which sat with him at meat, he commanded [it] to be given [her.] And he sent, and beheaded John in the prison. And his head was brought in a charger, and given to the damsel: and she brought [it] to her mother. And his disciples came, and took up the body, and buried it, and went and told Jesus. When Jesus heard [of it,] he departed thence by ship into a desert place.” [Matt. 14:8-13a]

Given the animosity of Herodias towards John the Baptist, one cannot help but see her thinly veiled plot in using the beguiling effect of her daughter over Herod, “Therefore Herodias had a quarrel against him, and would have killed him; but she could not.” [ Mark 6:19]

Belief on the Son of God

Quite often, theatre movies have portrayed John the Baptist as perhaps a bit of an odd, itinerant, somewhat troubled preacher and readers glossing over a few cursory verses may come to this same wrongful conclusion. John the Baptist’s importance, his role, his ministry and precursor to the Lord Jesus Christ, the lamb of God, brings us to one of the most compelling passages ever recorded of him in scripture during his short ministry. This is noted accordingly, “He that believeth on the Son hath everlasting life: and he that believeth not the Son shall not see life; but the wrath of God abideth on him.” [John 3:36]

This simple yet direct statement from John the Baptist conveys the unequivocal message of saving faith through belief in Jesus Christ. Christianity is a faith of exclusivity in believing on the Son, but it is clearly a faith of inclusivity for all who come to him by faith as Luke wrote in the book of Acts, “Neither is there salvation in any other: for there is none other name under heaven given among men, whereby we must be saved.” [Acts 4:12]