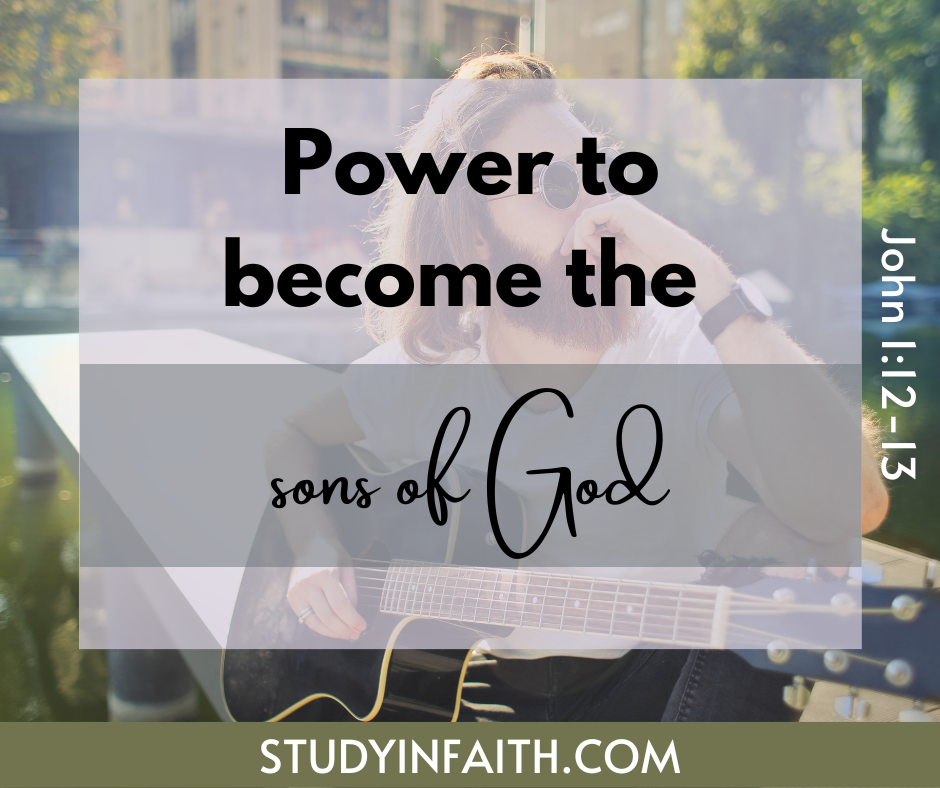 This study on power to become the sons of God will help people to learn about salvation. Depending on which Bible translation you reference for these verses, some will translate the word power with the right or authority and the word sons with children. For the three words, power, right or authority, it is important to note that they all stem from God through his power. This becomes even more evident when the apostle John notes in the second part of this scripture that believers who are spiritually born of God has nothing to do with human blood, or the will dwelling within the flesh or man’s will. In addition, the alternative rendering of children instead of sons is more inclusive given that women also can become children of God by receiving him also known as believing upon him (John 3:36, 7:38).

Clearly, there are some very key themes in these two verses and they are (1) as many as received him, (2) to them gave he power and (3) born… of God. These should be read as the the way of salvation in that they must go together to be saved. We must receive him or believe on him and the rest is then done by God. Becoming saved through the Lord Jesus Christ starts by receiving and believing in him as the atoning sacrifice for our sins. The apostle Paul wrote of this to the early church when he summarized it by saying, “For I delivered unto you first of all that which I also received, how that Christ died for our sins according to the scriptures; And that he was buried, and that he rose again the third day according to the scriptures:” [1 Cor. 15:3-4] This is where the power to become sons of God start, with Christ’s sacrifice on the cross.

As part of this study on power to become sons of God, let us also dispel any notion of where salvation does not happen since there are many misconceptions in the world, even within churches and denominations. While it is most helpful and beneficial, salvation does not happen simply because someone attends church. While someone may become convicted of their sin and hear the gospel message leading to salvation, merely sitting in a pew at church does not give anyone a hall pass to heaven. Further to this, obtaining educational credentials of any cum laude magnitude will not get you to heaven unless of course someone hears the gospel message and comes to saving faith in Christ by believing in him. Neither will belonging to certain albeit distinguished churches, denominations, religious groups, cults, or other religions. Christianity in and of itself is the great paradox in that it is an all inclusive gospel for whosoever will come to him (John 3:16) but with this it is an exclusive religion or relationship with Christ in that there is no other way of salvation on earth outside of Christ (Acts 4:12).

Consider these three verses from the Lord Jesus Christ in this manner with the first one when he spoke to the religious leaders called the Pharisees, “I said therefore unto you, that ye shall die in your sins: for if ye believe not that I am he, ye shall die in your sins.” [John 8:24] Note that word again, believe! Or take for example when Jesus spoke to the doubting apostle called Thomas when the said, “Jesus saith unto him, I am the way, the truth, and the life: no man cometh unto the Father, but by me.” [John 14:6] The exclusive nature of salvation was also noted by the ancient prophet Isaiah as he wrote through inspiration from the Lord God when he stated, “I, even I, am the LORD; and beside me there is no saviour.” [Is. 43:11] As the only saviour, the Lord indeed has the authority in giving us the power to become the sons of God.

The way, the truth, the life

This common theme becomes absolutely inescapable when reading the scriptures with an open mind and a willing heart. When Jesus spoke figuratively as being the door of the sheep he concluded by stating to the heavenly Father “As thou hast given him power over all flesh, that he should give eternal life to as many as thou hast given him. And this is life eternal, that they might know thee the only true God, and Jesus Christ, whom thou hast sent.” [John 17:2] As a recommendation, the gospel according to John is highly recommended reading for those who are skeptics of Christianity. John’s underlying premise is to prove to readers as noted in his concluding statement, “But these are written, that ye might believe that Jesus is the Christ, the Son of God; and that believing ye might have life through his name.” [John 20:31] John’s focus was indeed on presenting and proving the deity of Jesus Christ as the Son of God and the only way of salvation.

The other important point to note is that through scriptural references such as these it helps to substantiate that Christianity and saving faith in Jesus is not achieved by any admixture of Christian doctrine and other supplemental writings, no matter how seemingly religious they read. This is a common fault and failure of cult religions where they thrive on using the Bible but mix in their own so called self-proclaimed prophetic writings. The resulting effect is a false religion with a false salvation caused by a cult-like grip on adherents of their system of beliefs. The tenet is established that anyone outside of their four walls is apostate and the notion of doubting their doctrine will result in the threat of excommunication and eternal damnation among the heathen and infidels.

Another important consideration in the way of salvation (Acts 16:17) and the way of the Lord (Acts 18:25) is that it is not an admixture of the former Jewish religion that the early apostles only knew and the new way through Christ. This would result in the combination of the old covenant and the new covenant. This became a dilemma with the early church where converts to Christianity thought they must adhere to many of the practices of the Jewish religion such as circumcision and keeping the law. It is recorded in the Acts of the Apostles when they concluded with recommendations for the early church by stating, “That ye abstain from meats offered to idols, and from blood, and from things strangled, and from fornication: from which if ye keep yourselves, ye shall do well.” [Acts 15:29] Of the countless number of commandments contained in the Old Testament, the apostles summed it up in those four points of morality.

The apostle Paul explicitly stated to the church in Rome that the old covenant was not to be mixed with the new covenant as he expressed in his writings, “For Christ is the end of the law for righteousness to every one that believeth.” [Rom. 10:4] Note once again that key word, believe and the grammatical stress in this passage should be on the phrase, “…end of the law” for that is Christ. The apostle John wrote of this in his gospel account by stating the pivotal point between the old and the new covenants in his opening chapter, “For the law was given by Moses, but grace and truth came by Jesus Christ.” [John 1:17] This is also accounted for in the writings noted in the book of Hebrews which was intended principally for a Jewish audience who would have been most familiar with the Mosaic law as noted here “In that he saith, A new covenant, he hath made the first old. Now that which decayeth and waxeth old is ready to vanish away.” [Heb. 8:13]

This is where it all comes down to for seekers of faith. Christianity is the all inclusive gospel through the Lord Jesus Christ for whosoever will come to him (John 4:14). It is an exclusive gospel because Christ has done it all for us through his sacrificial atonement. People tend to think that there must be something more to it or that they must do something themselves to attain salvation but Christ has done it all for you. This is why Jesus’s last words on the cross were, “It is finished” [John 19:30]. This is why Paul wrote so many eloquent and pointed comments pertaining to the simplicity that is in Christ (2 Cor. 11:3) since he has the right to give power to become the sons of God to everyone that believes.

Paul stated this to the early church in Galatians when wrongful beliefs started creeping in with fellow believers as he candidly stated “I marvel that ye are so soon removed from him that called you into the grace of Christ unto another gospel: Which is not another; but there be some that trouble you, and would pervert the gospel of Christ. But though we, or an angel from heaven, preach any other gospel unto you than that which we have preached unto you, let him be accursed.” [Gal. 1:6-8] There is no other gospel dear seekers of faith, there is only one gospel from the Lord Jesus Christ. He is the eternal redeemer of your soul as shown in his writings below to the Galatians. Will you at this time come to him, receive him and believe on him to redeem your soul, to be justified in him by faith and to become a child of the living God?

“But the scripture hath concluded all under sin, that the promise by faith of Jesus Christ might be given to them that believe. But before faith came, we were kept under the law, shut up unto the faith which should afterwards be revealed. Wherefore the law was our schoolmaster to bring us unto Christ, that we might be justified by faith. But after that faith is come, we are no longer under a schoolmaster. For ye are all the children of God by faith in Christ Jesus.”