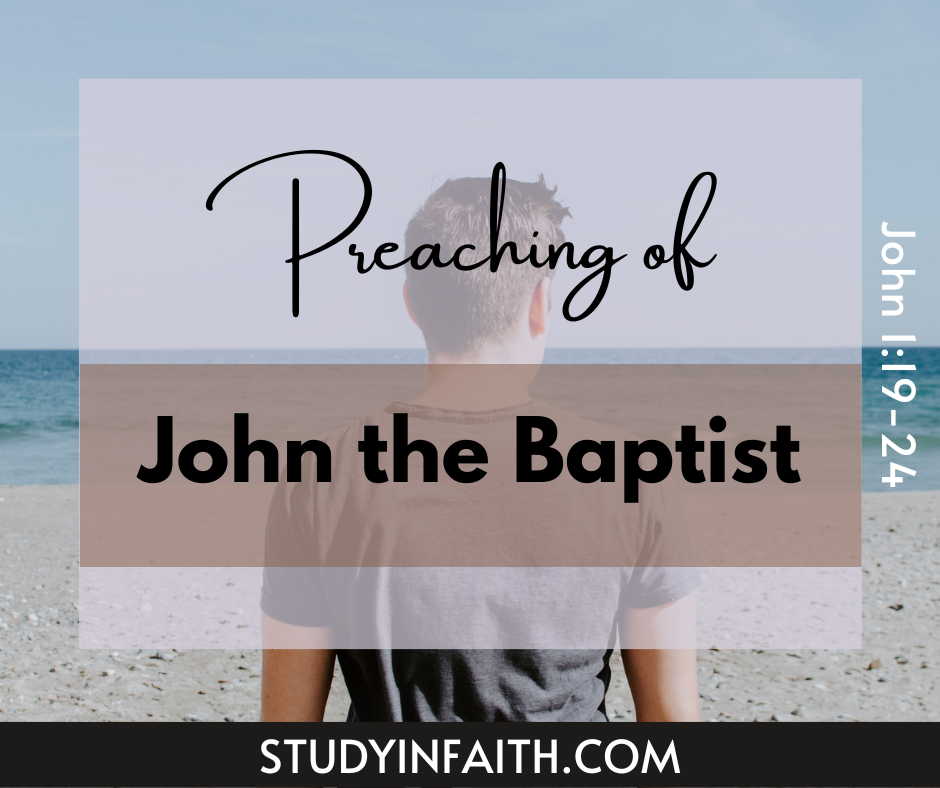 And this is the record of John, when the Jews sent priests and Levites from Jerusalem to ask him, Who art thou? And he confessed, and denied not; but confessed, I am not the Christ. And they asked him, What then? Art thou Elias? And he saith, I am not. Art thou that prophet? And he answered, No. Then said they unto him, Who art thou? that we may give an answer to them that sent us. What sayest thou of thyself? He said, I am the voice of one crying in the wilderness, Make straight the way of the Lord, as said the prophet Esaias. And they which were sent were of the Pharisees.

This week’s scripture reading presents what might be described as the first interrogation of John the Baptist by the religious elite of that day known as the Pharisees, “…and they which were sent were of the Pharisees.” Just before this, you have another John, the apostle, writing his account of the gospel and in the first chapter he proclaims so many magnificent aspects about the Son of God. Consider what he declares about Jesus such as his eternal preexistence, his creation of all things, eternal life is in him, John the Baptist was sent as a witness of him, Jesus was the true light of the world, that he gives power to them that believe on him to become the children of God, grace and truth comes from him, and that the Son is the manifestation in the flesh of the invisible God who is a Spirit. Yet despite all this revelation, the religious leaders are more intent on finding out just who this fellow is named John the Baptist and what he is up to in the wilderness baptizing all those people with water!

Notably, John the Baptist is quick to dispel any notion that he is the Christ by flat out stating, “I am not the Christ.” But the Jews were not content with that since they had a quasi laundry list of interrogative questions. If not the Christ, then John must be either the resurrection of Elias the ancient prophet or as they described someone else known as “that prophet”. But John the Baptist denied being any of these people and instead he simply opened up his dialogue with the Jews by proclaiming his ministry as “…the voice of one crying in the wilderness.” Further to this, he was out to proclaim a message to “make straight the way of the Lord, as said the prophet Esaias.” [John 1:23] This statement from John heralded in the witness that John had of Jesus (John 5:32) whom Jesus described as a burning and a shining light (John 5:35). He was indeed a voice of one crying in the wilderness and yet he had such a profound impact on the multitudes to bring them to Jesus in his quest to make him increase while he himself decreased in prominence (John 3:30).

Let us also look at some of the more forthright comments John the Baptist made during his earthly ministry. John claimed that God set his true seal on Jesus (John 3:33). He claimed Jesus speaks the words of God because the Spirit was given to him in an unlimited measure (John 1:34). He claimed the Father loves the Son and has given all things into his hand (John 1:35). From there, John’s culminating message then comes forth in his ministry as a witness for the Lamb of God by stating that, “He that believeth on the Son hath everlasting life: and he that believeth not the Son shall not see life; but the wrath of God abideth on him.” [John 1:36]

This great juxtaposing proclamation should garner the attention of every human being with a beating heart inside their body for John the Baptist presents an either or ultimatum that comes with eternal consequences. John was not one to mince his words during his ministry and his forthright speech drew the ire of his critics from the Jewish religious circles. He was known to have called the religious leaders less than desirable character traits such as in the this verse, “Ye serpents, ye generation of vipers, how can ye escape the damnation of hell?” [Matt. 23:33] But here in this brief statement above, John makes it clear for seekers of faith, that everlasting life comes through belief on the Son. In dire contrast to this, John also makes it very clear that he who does not believe on the Son will not see eternal life with God.

While John the Baptist is only documented in the four gospel accounts and briefly in the Acts of the Apostles, he nevertheless had a profound impact on his mandate received from God (John 1:33). Recall that it was John the Baptist who spread the message during his inaugural preaching in the wilderness in Judea when he proclaimed, “…Repent ye: for the kingdom of heaven is at hand.” [Matt. 3:2]. Our modern world of inclusion and acceptance has completely lost the concept of repentance and contrition for one’s sins. What was deemed sin in the Bible is now embraced by culture and community as though we have moved past all of those pesky sins noted in scripture. But Jesus echoed the same message of John when he opened his preaching by saying the same words of repentance. Further to this, he circled back many times with the multitudes by saying, “I tell you, Nay: but, except ye repent, ye shall all likewise perish.” [Luke 13:3] The importance of repentance must never be diminished in the Christian faith for this is what underscores the atoning sacrifice of Christ on the cross for our sins.

The way of the Lord

Let us close of this Bible study on the preaching of John the Baptist by revisiting one of his earlier statements when he called out to the people to make straight the way of the Lord. John’s preaching was indeed reminiscent of the prophet Isaiah for he also prophesied this very same message that was documented hundreds of years before John in this passage, “The voice of him that crieth in the wilderness, Prepare ye the way of the LORD, make straight in the desert a highway for our God.” [Is. 40:3] Notice the congruency in scripture for Jesus Christ also preached this same message by instructing the multitudes on the importance to, “Enter ye in at the strait gate: for wide is the gate, and broad is the way, that leadeth to destruction, and many there be which go in thereat:” [Matt. 7:13] Do you now see the similarities in preaching from both Jesus and John the Baptist? This verse is no different than John’s juxtapositional statement of believing on the Son for eternal life because this is what Jesus is meaning when he says to enter in at the straight, “Because strait is the gate, and narrow is the way, which leadeth unto life, and few there be that find it.” [Matt. 7:14]

What about you dear seeker of faith, do you want to find eternal life? Jesus tells us the gospel message is for whosoever will come to him and believe, “that they might have life.” This life is eternal life, not just the good life on earth, Jesus says, “…the words that I speak unto you, they are spirit, and they are life.” [John 6:63] But did you know that just after he preached to many of his disciples this message of eternal life that, “From that time many of his disciples went back, and walked no more with him.” [John 6:66] If you are seeking a life of faith in the Lord Jesus Christ now is the time to come to him, for these poor souls lost their eternal opportunity and walked no more with him. These are some of the most disturbing words in the Bible, to walk no more with him, for as Jesus proclaimed, “I am the way, the truth, and the life: no man cometh unto the Father, but by me.” [John 14:6] Why not believe in him now as you give thought to this closing verse, “And ye shall know the truth, and the truth shall make you free.” [John 8:32]