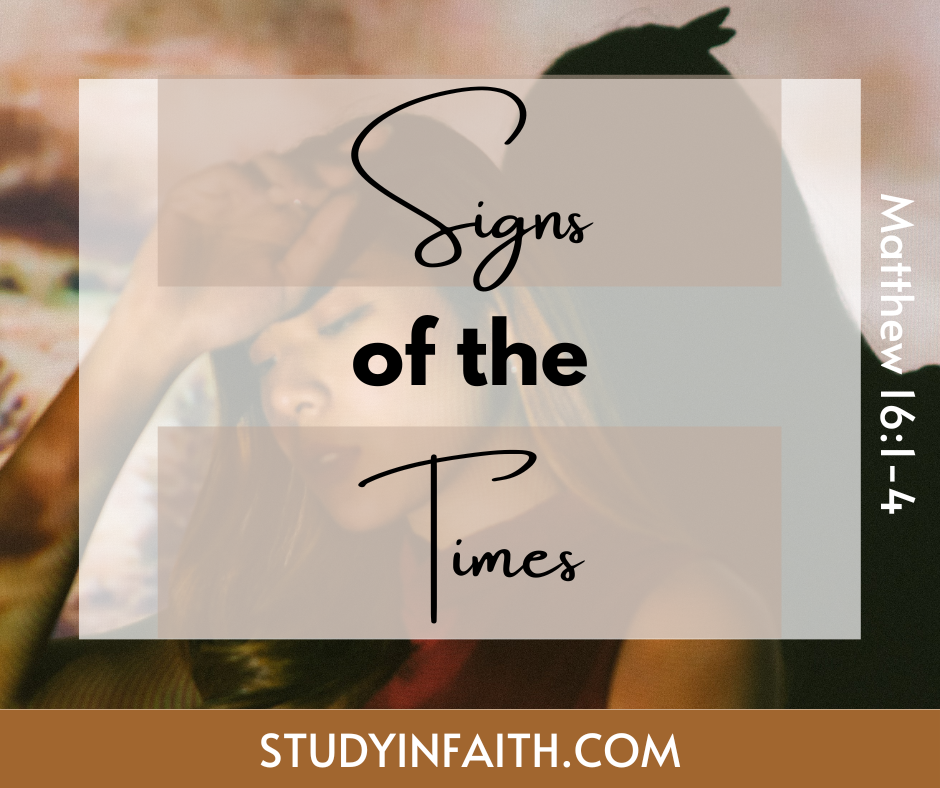 The Pharisees also with the Sadducees came, and tempting desired him that he would shew them a sign from heaven. He answered and said unto them, When it is evening, ye say, [It will be] fair weather: for the sky is red. And in the morning, [It will be] foul weather to day: for the sky is red and lowring. O [ye] hypocrites, ye can discern the face of the sky; but can ye not [discern] the signs of the times? A wicked and adulterous generation seeketh after a sign; and there shall no sign be given unto it, but the sign of the prophet Jonas. And he left them, and departed.

In this Bible study called the signs of the times, this was yet another interaction between Jesus with the Pharisees and the Sadducees. For followers of Study In Faith, you may recall a previous study that outlined the scribes and Pharisees ardent quest to thwart anything Jesus did during his earthly ministry. Well, here they are once again and it is quite astonishing to see their relentless desire to see a sign from heaven. It was not as though they were absent during the many miracles Jesus performed previously during his preaching, teaching and healing of people in many towns and communities.

They would have heard or witnessed Jesus bringing back people who had died such as the daughter of a certain ruler. Or how about the woman who had an issue of blood for twelve years and was instantly healed by touching the mere hem of the garment of Jesus. They would have heard and witnessed common and often afflicted people calling out to Jesus and addressing him by an iconic Old Testament title as the Son of David.

Then they would have seen the spread of his authority as he even empowered his disciples to perform miraculous acts of healing. The Pharisees and Sadducees would have heard Jesus refer to the heavenly Father as my father knowing full well that the claim made him equal with God (John 5:18). They would have surely heard Jesus preach to the multitudes over the need to take up their own proverbial cross and to follow him. They would have heard astonishing claims that no mere man could make, “All things are delivered unto me of my Father: and no man knoweth the Son, but the Father; neither knoweth any man the Father, save the Son, and [he] to whomsoever the Son will reveal [him.” [Matt. 11:27] They would have heard heartfelt messages from Jesus over the importance of mercy versus sacrifice as Jesus called himself Lord of the Sabbath.

Hypocrisy of the Pharisees

Despite all of this incredible display of signs from heaven, the Pharisees sought to blaspheme Jesus by falsely claiming his power came from Beelzebub, the prince of devils. Nevertheless, Jesus would have taught them through many parables such as the wheat and the tares which clearly gave insight into the kingdom of heaven. Yet they insisted on seeing more signs from him as if what he had accomplished and displayed was not enough to convert and transform anyone from their sinful deception.

They would no doubt have sided with and heavily influenced the prevailing dialogue around Jesus as people asked is not this the carpenter’s son? Bearing in mind these times were comprised of small towns with word of mouth travelling fast in the community, they would clearly have gotten word about Jesus walking on the sea in the middle of the night. The Pharisees would have been pushed to think deeper about their religion of self imposed traditions as Jesus highlighted how they were making the commandments of God of none effect.

Perhaps to further give evidence and substance to their claim in this week’s scripture reading, their comments for seeking a sign from heaven were also recorded by both Mark and Luke in their gospel accounts. This is noted to refute anyone from thinking whether Matthew’s account of this was perhaps in error. In fact, even the apostle John recorded another occasion where the Jews asked Jesus for a sign to substantiate his actions (John 6:30). In Paul’s letters to the early churches, he also duly noted how the Jews require a sign in order to believe anything, “For the Jews require a sign, and the Greeks seek after wisdom.” [1 Cor. 1:22] In contrast to this, Paul highlighted what was truly more important from the scriptures when he said, “But we preach Christ crucified, unto the Jews a stumblingblock, and unto the Greeks foolishness.” [1 Cor. 1:23]

We have covered a lot of territory in this Bible study called signs of the times and this was intended to show that the Pharisees and Sadducees indeed had ample opportunity to see the signs from heaven everywhere Jesus went, every time he spoke, every person he healed and how he commanded power over nature itself. Where does this leave you as a seeker of faith or as a believer in Christ? Are you still seeking a sign from heaven or from God?

Does not today’s culture tend to make fun of the saying, “show me a sign”? Are you one of those seekers of faith or agnostic people who refuse to believe unless of course Jesus came down from heaven and spoke to you directly? Or worse yet, are you an atheist who has no belief in God until the wisdom of this world convinces you otherwise? Consider the scriptures from 1 Cor. 1:18 – 2:5 before taking this stance in life.

Consider the many signs from heaven Jesus demonstrated during his earthly presence in having compassion on the multitudes of people. Consider his message of hope and faith in his saving grace as he gave his life to atone for your sins on the cross at Calvary. Consider his resurrection from the dead as he conquered death. (1 Cor. 15:25-26)

Consider that he sent us the Holy Spirit to comfort us, to guide us and to convict us until the Lord’s return (John 16:7). For many people though, it will be too late if they wait for yet another sign. Much like the Pharisees and Sadducees, it was too little to late for them. The Bible says, “And as it is appointed unto men once to die, but after this the judgment.” [Heb. 9:27] Think about this verse for a moment, judgment is coming after death.

While our culture phrases death with rest in peace, there is something else that awaits mankind after death. Jesus proclaimed, “Verily, verily, I say unto you, He that heareth my word, and believeth on him that sent me, hath everlasting life, and shall not come into condemnation; but is passed from death unto life.” [John 5:24] From death unto life, what a contrast to the world’s view of rest in peace. Jesus is indeed coming again and the signs of his coming will be like nothing the world has ever seen since time began.

If this is the sign you desire to seek dear reader, make it a point to come to Jesus now in faith and believe that he paid the price for your sins on the cross. By doing this now, you will then be able to rejoice in reading this closing verse from scripture instead of mourning in unbelief when it happens, “And then shall appear the sign of the Son of man in heaven: and then shall all the tribes of the earth mourn, and they shall see the Son of man coming in the clouds of heaven with power and great glory. And he shall send his angels with a great sound of a trumpet, and they shall gather together his elect from the four winds, from one end of heaven to the other.” [Matt. 24:30-31] Why not make the decision now to come to him in faith today?