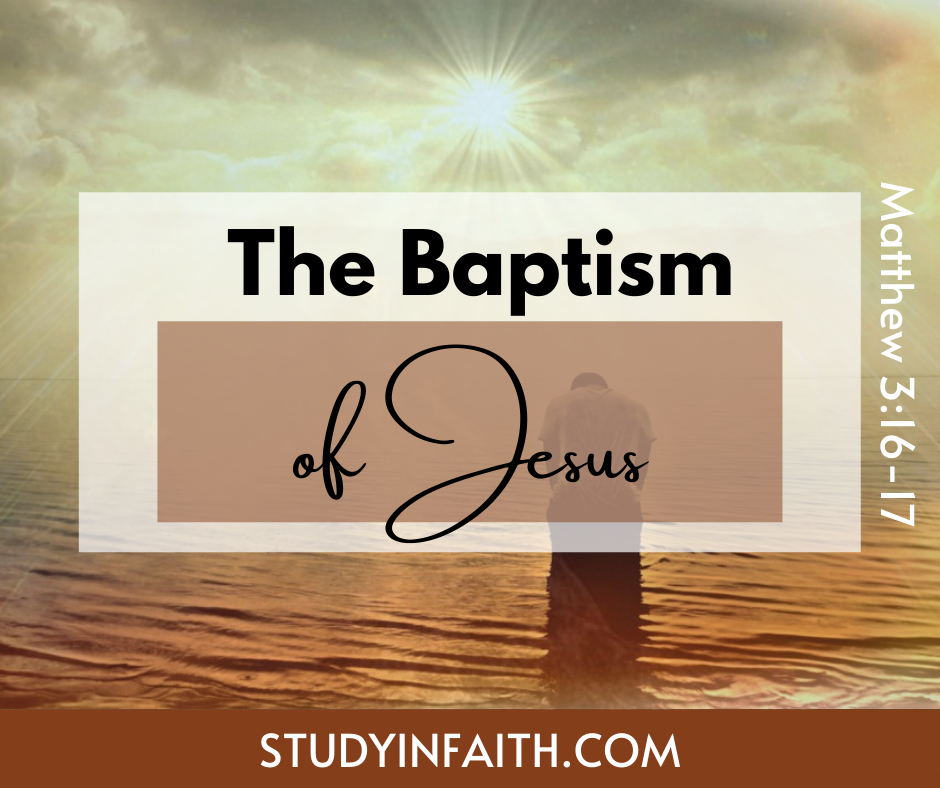 And Jesus, when he was baptized, went up straightway out of the water: and, lo, the heavens were opened unto him, and he saw the Spirit of God descending like a dove, and lighting upon him: And lo a voice from heaven, saying, This is my beloved Son, in whom I am well pleased.

The baptism of Jesus is noted in all four gospel accounts but his baptism reveals something far more profound. The baptism of Jesus reveals the triune God, otherwise known as the trinity, a foundational part of the Christian faith. It is presented in this seemingly routine baptism during John the Baptist’s ministry. After all, John was baptizing a number of people from various regions, “Then went out to him Jerusalem, and all Judaea, and all the region round about Jordan, And were baptized of him in Jordan, confessing their sins.” [Matt. 3:5-6] It would therefore have been a familiar scene around John the Baptist to see crowds of people being baptized. Interestingly, the Bible is silent on who baptized John the Baptist but it would not have been Jesus, “(Though Jesus himself baptized not, but his disciples).” [John 4:2]

When Jesus however came to him to be baptized, John contested the notion of baptizing him but this was appeased by Jesus, “But John forbad him, saying, I have need to be baptized of thee, and comest thou to me? And Jesus answering said unto him, Suffer [it to be so] now: for thus it becometh us to fulfil all righteousness.” [Matt. 3:14-15] For those considering baptism, this should indeed be something of significance given that Jesus himself was baptized. Both John the Baptist and Jesus were adults, approximately thirty years of age. A question that can be answered from scripture is what river was Jesus baptized in since this is documented in Mark 1:9, “And it came to pass in those days, that Jesus came from Nazareth of Galilee, and was baptized of John in Jordan.” [Mark 1:9]

So here, during this event, the trinity is presented in seamless stride in the baptism of Jesus, first with Jesus, the Son of God coming out of the water after his baptism [Matt. 3:16, 16:16], then the Spirit of God, or Holy Spirit visibly descending like a dove from heaven [Matt.3:16, Acts 5:4], and then God the Father audibly speaking from heaven to the people who were present [Matt. 3:17, Is, 45:18b]; with all of the noted verses representing God. John the Baptist also gave witness of this event, “And I knew him not: but he that sent me to baptize with water, the same said unto me, Upon whom thou shalt see the Spirit descending, and remaining on him, the same is he which baptizeth with the Holy Ghost. And I saw, and bare record that this is the Son of God.” [John 1:33-34]

While the trinity is subtly shown in the Old Testament it becomes more prevalent in the New Testament with his birth and now visibly with the baptism of Jesus. It is without a doubt, one of the most hotly debated topics among cults and other religions due to its perceived obscurity within the scriptures and since its veracity contradicts many false belief systems.  As such, there is often a determined effort from cults to misconstrue, misinterpret and mislead people on the doctrine of the trinity. While there are many proof texts which help to prove and substantiate the trinity, they tend to get twisted by people for various reasons and purposes; often incorrectly confusing scripture related to the deity of Jesus with his human nature.

The trinity though, is quite hard to explain in simple terms such as during the scene in the baptism of Jesus. Perhaps in a very poor attempt, it is a bit like trying to explain how the sun has been burning indefinitely, millennia after millennia, freely suspended in space, at a perfect distance from earth to sustain life. Any wonder, primitive cultures labeled the sun as a god given its unimaginable magnitude in size and intense heat during certain times of the year. People have also tried to describe the trinity with the various forms of water in that water can manifest itself as liquid, ice or steam and yet still represent water. All of these however, are mere human attempts to define the all knowing, all present and all powerful God. As the ancient prophet once stated of the Lord, “For my thoughts [are] not your thoughts, neither [are] your ways my ways, saith the LORD. For [as] the heavens are higher than the earth, so are my ways higher than your ways, and my thoughts than your thoughts.” [Is. 55:8-9]

The Son of God

At the core of the Christianity though, Jesus is very God himself as the Son of God. Most religions are confused or perplexed over the notion of this but Christian faith is pivotal on three persons in the Godhead, the Father, the Son and the Holy Spirit. This does not mean there are three Gods, rather there is one God, “Hear, O Israel: The LORD our God [is] one LORD.” [Deut. 6:4] This same tenet is also declared, “Thus saith the LORD the King of Israel, and his redeemer the LORD of hosts; I [am] the first, and I [am] the last; and beside me [there is] no God.” [Is. 44:6]

In the New Testament, more explicit references to Jesus as God are evident, “But unto the Son [he saith,] Thy throne, O God, [is] for ever and ever: a sceptre of righteousness [is] the sceptre of thy kingdom.” [Heb. 1:8] Another verse is noted by the apostle, “In the beginning was the Word, and the Word was with God, and the Word was God.” [John 1:1] The Word is of course referring to Jesus. Similarly, the Holy Spirit is also referenced as God, “But Peter said, Ananias, why hath Satan filled thine heart to lie to the Holy Ghost, and to keep back [part] of the price of the land? Whiles it remained, was it not thine own? And after it was sold, was it not in thine own power? why hast thou conceived this thing in thine heart? thou hast not lied unto men, but unto God.” [Acts 5:3-4]

The point here is this, if there is only one God as stated in scripture, how then can three persons have the same attributes of God? There has to be some reconciliation of the scriptures in this regard to acknowledge that God is one, but exists and always has existed as a triune God. The scriptures give subtle evidence of this right back in the beginning by using a plural reference, “And God said, Let us make man in our image, after our likeness.” [Gen. 1:26a] Any deviation from this would otherwise be an abrogation of the Christian faith, subject to heresy or cultism. In the end, this is where faith must come into play, “Now faith is the substance of things hoped for, the evidence of things not seen.” [Heb.11:1] This does not imply blind faith but ultimately people must make a decision on who God really is, “But without faith [it is] impossible to please [him:] for he that cometh to God must believe that he is, and [that] he is a rewarder of them that diligently seek him.” [Heb. 11:6]

The subject of the trinity is in depth at the very least and has been causation for countless articles and books written either in support or denial of it. The apostle Peter once addressed a Jewish audience and gave a long message on the coming Messiah from Jewish history as it pertained to Jesus. Near the end of his comments he stated in Acts 2:36-38, “Therefore let all the house of Israel know assuredly, that God hath made that same Jesus, whom ye have crucified, both Lord and Christ. Now when they heard [this,] they were pricked in their heart, and said unto Peter and to the rest of the apostles, Men [and] brethren, what shall we do? Then Peter said unto them, Repent, and be baptized every one of you in the name of Jesus Christ for the remission of sins, and ye shall receive the gift of the Holy Ghost.” [Acts 2:36-38]

The Jews were pricked or cut to the heart upon hearing that Jesus was both Lord and Christ for they already knew of the Lord as foundational to their own religion, “I [am] the LORD, and [there is] none else, [there is] no God beside me.” [Is. 45;5] To now be made aware that Jesus was both Lord and Christ (Messiah) this would indeed have been a startling revelation for them and one that was either accepted or rejected.

To close off this Bible Study on the baptism of Jesus, Paul also made the bold statement that Jesus is Lord, “That at the name of Jesus every knee should bow, of [things] in heaven, and [things] in earth, and [things] under the earth; And [that] every tongue should confess that Jesus Christ [is] Lord, to the glory of God the Father. ” [Phil. 2:10-11] Also consider how the apostle John associated Jesus as God, “Hereby perceive we the love of God, because he laid down his life for us: and we ought to lay down our lives for the brethren.” [1 John 3:6] The words are in bold for added emphasis for it was Jesus who laid down his life for us.

For some readers these scripture references may be hard to grasp, but it is with sincere prayer that people will contemplate the trinity as it plays out across scripture and in future Bible Studies. As Jesus instructed his disciples after his resurrection, he also proclaimed the triune God in his benediction, “Go ye therefore, and teach all nations, baptizing them in the name of the Father, and of the Son, and of the Holy Ghost: Teaching them to observe all things whatsoever I have commanded you: and, lo, I am with you alway, [even] unto the end of the world.” [Matt.28:19-20] Amen. In closing, who would have ever thought the triune God would be displayed in such majesty during the baptism of Jesus.