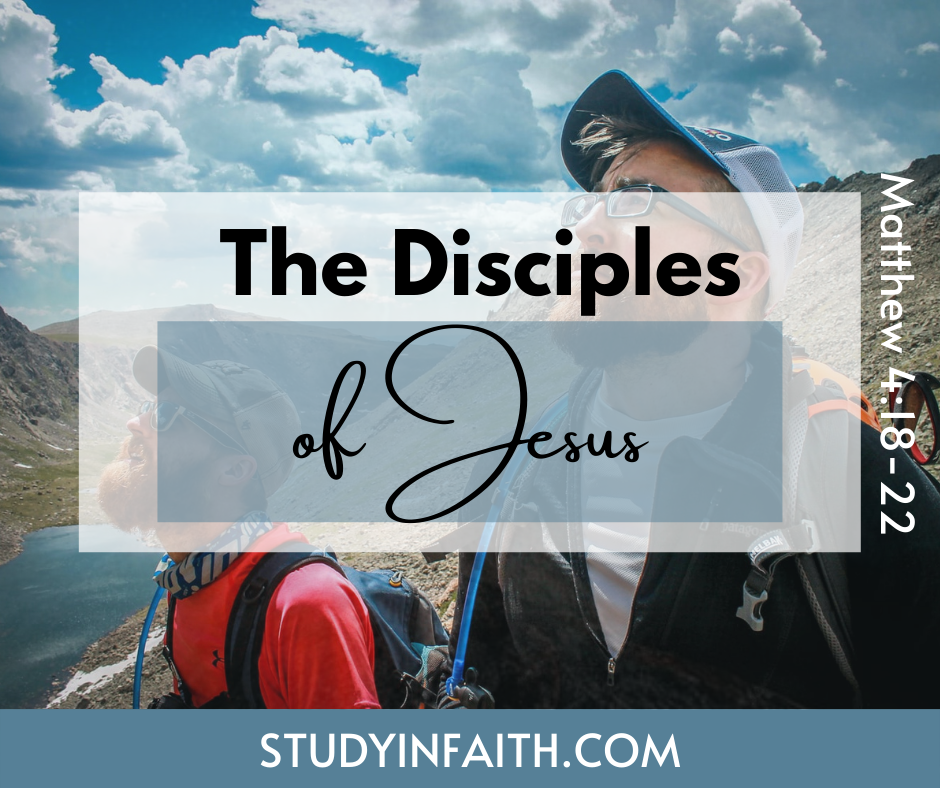 And Jesus, walking by the sea of Galilee, saw two brethren, Simon called Peter, and Andrew his brother, casting a net into the sea: for they were fishers. And he saith unto them, Follow me, and I will make you fishers of men. And they straightway left [their] nets, and followed him. And going on from thence, he saw other two brethren, James [the son] of Zebedee, and John his brother, in a ship with Zebedee their father, mending their nets; and he called them. And they immediately left the ship and their father, and followed him.

Calling of the Disciples

The events recorded here mark the calling of the disciples by Jesus, many of whom would become his future apostles. Cross referencing scripture shows this event was also recorded in [Mark 1:16-20], again noting the same four individuals, Peter, Andrew, James and John. It is of interest to note that earlier, some of these individuals were disciples of John the Baptist, “Again the next day after John stood, and two of his disciples. And looking upon Jesus as he walked, he saith, Behold the Lamb of God! And the two disciples heard him speak, and they followed Jesus.” [John 1:35-37]

The text continues on to give reference to Andrew and Simon Peter, “One of the two which heard John [speak,] and followed him, was Andrew, Simon Peter’s brother. He first findeth his own brother Simon, and saith unto him, We have found the Messias, which is, being interpreted, the Christ.” [John 1:40-41] This was the beginning of when Jesus called the twelve apostles which are listed in Matt. 10:1-4 for easy reference.

What the Disciples Knew

The early disciples of Jesus would have seen him earlier than this and were likely familiar with the facts John the Baptist taught about him. They could have been aware of the following points as noted by the apostle John in chapter one of his gospel account – John the Baptist was sent to bear witness of the true light, Jesus existed before him, Jesus is the Lamb of God that takes away the sin of the world, the Holy Spirit abode on Jesus, Jesus would baptize with the Holy Spirit, and Jesus is the Son of God. Further to this was Andrew’s declaration to his brother Simon that Jesus is the Messiah, or Christ as noted above. By giving some background information on these individuals, it helps to show that Jesus did not just arbitrarily approach them as strangers and say, follow me.

Some of the twelve apostles and their characteristics are noteworthy. Consider when Jesus called Matthew, “And as Jesus passed forth from thence, he saw a man, named Matthew, sitting at the receipt of custom: and he saith unto him, Follow me. And he arose, and followed him.” [Matt. (9:9] This same event is also recorded in the gospels of Mark and Luke, both of which give further context to the remarkable hospitality Matthew accorded Jesus shortly thereafter, “And it came to pass, that, as Jesus sat at meat  in his house, many publicans and sinners sat also together with Jesus and his disciples: for there were many, and they followed him.” [Mark 2:15] Matthew, as noted in previous Bible Studies, was a Jewish man, he was also a tax collector for the despised Roman Empire and yet it was clearly a day of celebration for him upon receiving the call to follow Jesus.

Another one called by Jesus with this short and somewhat direct invitation, follow me , was Philip, “The day following Jesus would go forth into Galilee, and findeth Philip, and saith unto him, Follow me.” [John 1:43] Philip was from the same town as Andrew and Peter and his comments provide further information of the knowledge these individuals possessed about Jesus, “Now Philip was of Bethsaida, the city of Andrew and Peter. Philip findeth Nathanael, and saith unto him, We have found him, of whom Moses in the law, and the prophets, did write, Jesus of Nazareth, the son of Joseph.” [John 1:44-45] The impact Jesus had upon these individuals is illustrated by the reaction of Nathanael upon meeting him. While he scoffed at the notion of anything good coming out of Nazareth, this soon changed after his encounter with Jesus, “Nathanael answered and saith unto him, Rabbi, thou art the Son of God; thou art the King of Israel.” [John 1:49]

What the Disciple’s Left

The New Testament disciples of Jesus took a very dramatic step in their lives by immediately leaving valuable possessions and family members to follow him, “And when they had brought their ships to land, they forsook all, and followed him.” [Luke 5:11] “Then Peter began to say unto him, Lo, we have left all, and have followed thee.” [Mark 10:28] After Jesus’ crucifixion some of the disciples temporarily returned to their former profession [John 21:1-3a] before realizing their holy calling would lead to fulfilling an eternal mission.

Little did the disciples know their lives would be forever changed from that point onwards after being eye witnesses to the risen saviour [1 Cor. 15:1-8]. Thereafter, they faced persecutions and afflictions [2 Tim. 3:11], they encountered tribulations [2 Thess. 1:4], they performed miraculous signs [Acts 28:7-9], and tragically faced death for their faith [Acts 7:59, 12:1-2]. These scripture references illustrate just a small selection from the New Testament. The apostles had a divine calling with empowerment from Jesus, “And when he had called unto [him] his twelve disciples, he gave them power [against] unclean spirits, to cast them out, and to heal all manner of sickness and all manner of disease.” [Matt.10:1]

Not everyone called though became one of Jesus’ chosen twelve apostles, “And when it was day, he called [unto him] his disciples: and of them he chose twelve, whom also he named apostles; Simon, (whom he also named Peter,) and Andrew his brother, James and John, Philip and Bartholomew, Matthew and Thomas, James the [son] of Alphaeus, and Simon called Zelotes, And Judas [the brother] of James, and Judas Iscariot, which also was the traitor.” [ Luke 6:13-16] Paul indicated the uniqueness of Jesus’ disciples, “For ye see your calling, brethren, how that not many wise men after the flesh, not many mighty, not many noble, [are called.] ” [1 Cor. 1:26] But Paul himself indeed knew his calling, “Paul, called [to be] an apostle of Jesus Christ through the will of God.” [1 Cor. 1:1]

This brings us to the last point of the Bible Study from this week’s scripture reading and that is the calling from God upon his people as stated in the initial verse, follow me. The gospel of Jesus could be called the “whosoever” gospel since Jesus himself indicated this, “For God so loved the world, that he gave his only begotten Son, that whosoever believeth in him should not perish, but have everlasting life.” [John 3:16] Whosoever, or whoever, is all the people in the world, people from all walks of life, regardless of race, ethnicity, culture, or social status. Jesus used this phrase, whosoever, on another occasion with Martha, “And whosoever liveth and believeth in me shall never die.” [John 11:26a]

Peter the apostle used this term when quoting the prophet, “And it shall come to pass, [that] whosoever shall call on the name of the Lord shall be saved.” [Acts 2:21] Peter also used this phrase a second time further affirming the message, “To him give all the prophets witness, that through his name whosoever believeth in him shall receive remission of sins.” [Acts 10:43] Paul additionally used this all inclusive message, “For whosoever shall call upon the name of the Lord shall be saved.” [Rom. 10:13] John also used this all encompassing phrase, “Whosoever believeth that Jesus is the Christ is born of God. Hopefully, readers can see the overwhelming evidence to support the inclusiveness of the gospel of the Lord Jesus Christ.” [1 John 5:1]

To close off this Bible Study on the disciples of Jesus, people at times may find God very far away from them during challenges they encounter or experience in life. It should always be remembered though that the gospel of Jesus Christ is indeed for whosoever as Jesus further expressed, “Come unto me, all [ye] that labour and are heavy laden, and I will give you rest. Take my yoke upon you, and learn of me; for I am meek and lowly in heart: and ye shall find rest unto your souls.” [Matt. 11:28-29] Why not take a moment now and come to Jesus in prayer to receive much needed rest in him.