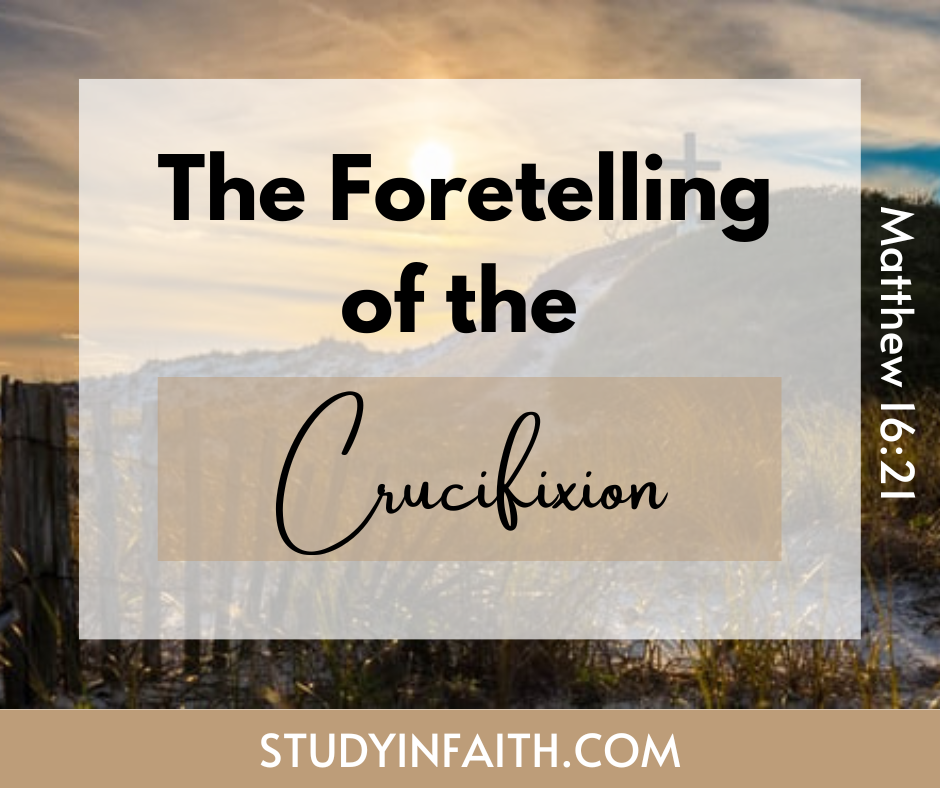 From that time forth began Jesus to shew unto his disciples, how that he must go unto Jerusalem, and suffer many things of the elders and chief priests and scribes, and be killed, and be raised again the third day.

In this study called the foretelling of the crucifixion, it is noteworthy that this event took place following another very important event. Just before this, Jesus asked his disciples who the people said that he was. This led to the disclosure from the disciples that people were really not sure who Jesus was since some thought he was John the Baptist, some thought he was Elias, or Jeremias, or one of the prophets. Keep in mind, many saw Jesus as nothing more than the carpenter’s son. But after this Jesus then asked his disciples who they thought he was and it was the apostle Peter who proclaimed that Jesus was the Christ, the Son of the living God.

Once this proclamation was made, Jesus then started to share with his disciples that he must ultimately go to Jerusalem and face persecution at the hands of the religious leaders. But put yourself in the position of his disciples. Here they were following this person called Jesus, whom they initially knew as a carpenter and yet he was teaching, preaching and healing people in such profound ways, therefore they knew there was more to him than just his trade profession.

So here they were following him, leaving all their possessions and professions of employment to be with Jesus and now he is telling them that he must go to Jerusalem, suffer many things, be killed and then be raised again the third day. Wait, what, what do you mean be raised again the third day? Who says or does something like that? What does he really mean by these words? Why does he have to suffer and be killed in the first place? All these questions would indeed have been circling among the disciples of Jesus.

For the rest of this study called the foretelling of the crucifixion, we are about to go deep into the scriptures to see why this had to take place and what it means for you and me. The scriptures record a prophetic message in the book of Isaiah about someone who was to be punished by having our sin and iniquity laid upon him as the sin bearer. This starts out in this passage, “But he [was] wounded for our transgressions, [he was] bruised for our iniquities: the chastisement of our peace [was] upon him; and with his stripes we are healed. All we like sheep have gone astray; we have turned every one to his own way; and the LORD hath laid on him the iniquity of us all.” [Is. 53:5-6] This foretelling of the punishment and death of Jesus was very symbolic to what he was telling his disciples from this week’s scripture reading.

Jesus was manifest into the world to pay the atonement for our sins and to reconcile us back to the heavenly Father. Isaiah continues a bit further in writing his prophecy, “Yet it pleased the LORD to bruise him; he hath put [him] to grief: when thou shalt make his soul an offering for sin.” [Is. 53:10a] The passage starts to conclude by indicating the sin offering was a sacrifice unto death, “Therefore will I divide him [a portion] with the great, and he shall divide the spoil with the strong; because he hath poured out his soul unto death: and he was numbered with the transgressors; and he bare the sin of many, and made intercession for the transgressors.” [Is. 53:12]

This is a pivotal passage of scripture that harmonizes with the theme of the New Testament in that Christ came into the world to save sinners. The apostle Paul wrote of this most eloquently in his letter from 1 Tim. 1:15, “This [is] a faithful saying, and worthy of all acceptation, that Christ Jesus came into the world to save sinners; of whom I am chief.” [1 Tim. 1:15] Jesus himself spoke of this same theme when he engaged with a Pharisee named Nicodemus, “For God so loved the world, that he gave his only begotten Son, that whosoever believeth in him should not perish, but have everlasting life.” [John 3:16]

Do you see the common theme in these scriptures. The scriptures say that all have sinned and fall short of the glory of God from Rom. 3:23. None of us are exempt from the inborn nature of sin, none of us are exempt from the eternal consequences of sin, and none of us in our own power, will, or ability can atone for our own sin, despite what the world tells you. This is why Jesus was sent into the world, “For God sent not his Son into the world to condemn the world; but that the world through him might be saved.” [John 3:17] This is why Paul declared in his letter to the early church, “For he hath made him [to be] sin for us, who knew no sin; that we might be made the righteousness of God in him.” [2 Cor. 5:21]

The only way of atonement between sin-born mankind and a holy God is through the mediatory work of Jesus Christ who was without sin (Heb. 4;15). He is the way, the truth and the life (John 14:6), he is the true light (John 1:9), he is the one who has the power for us to become the sons of God (John 1:12). This is the whole point of Christianity. It is not man reaching up to God, it is God reaching down to man, to redeem humanity, to save us from condemnation, for we are hopelessly lost without redemption in Christ. The Bible states, “For the wages of sin [is] death; but the gift of God [is] eternal life through Jesus Christ our Lord.” [Rom. 6:23]

Salvation is indeed a gift to us dear readers, but it came through a very painful, punishing and humiliating process of scourging, mocking and death upon a Roman cross; something in that era that was seen as the pinnacle of debasement. A type of death reserved for common criminals and men of ill repute. But in humility, Jesus took our sin, all of it, and bear the penalty for our sin upon himself as the sin bearer. This is why this week’s Bible study called the foretelling of the crucifixion is so noteworthy. It was the beginning of the end, the march to Jerusalem, as a lamb to the slaughter (Is. 53:7), and yet his disciples did not comprehend his comments.

Let us close of this Bible study called the foretelling of the crucifixion by making a point to read the scriptures very carefully and with intent to learn from the Lord Jesus Christ. This is a passage of scripture that is surprisingly whisked over in many Bible commentaries but consider the implications of the words of Jesus. He is telling us what is going to happen before they happened, he is preparing his beloved disciples for his imminent punishment and death. Perhaps most importantly, he is telling us that despite all of this, even his death, that he will rise from the dead on the third day.

For seekers of faith, this is the gospel message. Paul articulated this so well in his letter to the Corinthian church, “Moreover, brethren, I declare unto you the gospel which I preached unto you, which also ye have received, and wherein ye stand; {By which also ye are saved, if ye keep in memory what I preached unto you, unless ye have believed in vain. For I delivered unto you first of all that which I also received, how that Christ died for our sins according to the scriptures; And that he was buried, and that he rose again the third day according to the scriptures.” [1 Cor. 15:1-4]

Do you now see the common theme in the foretelling of the crucifixion? Jesus was telling us exactly what would happen to him. Paul is telling us exactly what happened to Jesus. Why not take this opportunity to come to him in prayer, seek him with your heart, soul and spirit and believe in his death on the cross as atonement for your sins? Is not this your desire today, to know that your worthless sins are forgiven and that eternal life is only a moment away through belief in the Lord Jesus? Come to him now in faith.

For reference, here are some frequently asked questions that are answered in this Bible Study. It is with sincere prayer that they have been answered through carefully researched and written commentary for seekers of faith. The absence of answers in the study is perhaps indicative that the events and circumstances were deemed less worthy of documentation in the overall importance of biblical scripture. The crucifixion foretold. Old Testament prophecy about Jesus’ death fulfilled. What Old Testament prophecies predicted Jesus’ death? The crucifixion and Old Testament prophecy. What does Isaiah say about the crucifixion? Prophecies about the death and crucifixion of Jesus. Isaiah prophecy of Jesus death. Isaiah prophecy about Jesus.