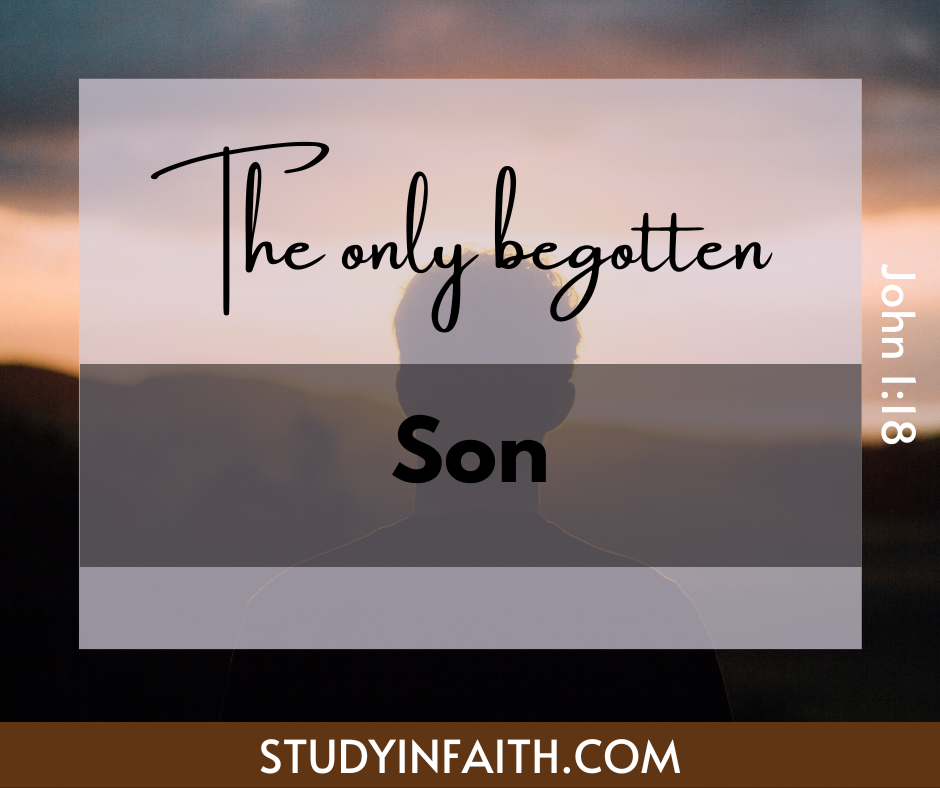 No man hath seen God at any time; the only begotten Son, which is in the bosom of the Father, he hath declared him.

In this Bible study we will delve into the one of the most intriguing statements made by the apostle John. In this short verse, he makes three proclamations and these are as follows – that no one at any time has ever seen God, that the only begotten Son has seen God ( John 6:46) and that the Son has declared God. The three parts of this verse all go together but let us first have a look at how John states that no one has seen God. The scriptures declare that “God is a Spirit: and they that worship him must worship him in spirit and in truth. [John 4:24] Further to this, the scriptures state that, “…a spirit hath not flesh and bones…” [Luke 24:39] Now add to that the point that since God is a Spirit he is invisible as noted in this passage, “Now unto the King eternal, immortal, invisible, the only wise God, be honour and glory for ever and ever. Amen.” [1 Tim. 1:17] Therefore, John is highlighting this great astonishing fact that God is a Spirit and is not visible to us within the context of human sight. In essence, we would only be able to see him through some form of human manifestation of him as referenced in sections of the Old Testament (Ex. 33:20).

But now after the apostle John makes this bold statement about God he then proceeds to highlight that the unique, one and only Son of God which is together with God has declared God to us. While this may sound a bit like double talk we will expound upon this statement from John to better understand it. John is the only one who used the phrase begotten in reference to Jesus in his gospel account. This was not used by Matthew, Mark or Luke in their gospel accounts. John also used the phrase begotten in his first letter and in the book of Revelation. Begotten in this case infers the unique or only one from God. This harmonizes with why John wrote his gospel account as he stated near the end of his writings, “But these are written, that ye might believe that Jesus is the Christ, the Son of God; and that believing ye might have life through his name.” [John 20:31]

The manifestation of God

In short, Jesus is the physical manifestation of God through human fleshly form. Consider how this is described by the apostle Paul in this passage when he states, “And without controversy great is the mystery of godliness: God was manifest in the flesh, justified in the Spirit, seen of angels, preached unto the Gentiles, believed on in the world, received up into glory.” [1 Tim. 3:16] This premise created tremendous confusion for many of the early apostles and indeed was cause for consternation among the religious leaders known and the scribes and Pharisees. They could not comprehend how Jesus, whom they knew within the community was God manifest in the flesh as noted in this verse, “Is not this Jesus, the son of Joseph, whose father and mother we know? how is it then that he saith, I came down from heaven?” [John 6:42]

Think about some of his closest disciples like Philip who had been with him day after day for years, but still could not fathom what Jesus was preaching and teaching. Philip kept doubting and asked Jesus just to show them the Father but note the response back to Philip, “Jesus saith unto him, Have I been so long time with you, and yet hast thou not known me, Philip? he that hath seen me hath seen the Father; and how sayest thou then, Shew us the Father? Believest thou not that I am in the Father, and the Father in me? the words that I speak unto you I speak not of myself: but the Father that dwelleth in me, he doeth the works. Believe me that I am in the Father, and the Father in me: or else believe me for the very works’ sake.” [John 14:9-11] If there ever was a scripture passage that helped to articulate the relationship of God the Father and God the Son this is certainly one of them. Here, Jesus is explaining that he is the manifestation of God on earth through physical human form as the only begotten Son.

For they will see God

But now consider some verses from the Bible that pose very thought provoking if not puzzling questions about the notion of seeing God. Many readers will remember from the sermon on the mount when Jesus started out his preaching by saying, “Blessed are the pure in heart: for they shall see God.” [Matt. 5:8] Now was this meant to mean that we will actually see God’s form but if that were the case it would contradict all of the above passages of scripture. Perhaps it is implying that inner purity will indeed allow you to see God through his Spirit in your life. Or take note of this verse from one of John’s final letters when he describes how things will be upon seeing Jesus again, “Beloved, now are we the sons of God, and it doth not yet appear what we shall be: but we know that, when he shall appear, we shall be like him; for we shall see him as he is.” [1 John 3:2] This is once again the God-man, the Son of Man, the Son of God appearing to us from the heavens in all his heavenly glory!

It is important to view scripture in the context of other relevant scripture in cases such as the ones from this week’s scripture reading on the only begotten Son of God. For this purpose, notice once again how the apostle Paul describes the magnificence of the Son of God in this passage of scripture, “That thou keep this commandment without spot, unrebukeable, until the appearing of our Lord Jesus Christ: Which in his times he shall shew, who is the blessed and only Potentate, the King of kings, and Lord of lords; Who only hath immortality, dwelling in the light which no man can approach unto; whom no man hath seen, nor can see: to whom be honour and power everlasting. Amen.” [1 Tim. 6″16] A simple scripture check on the phrase king of kings and Lord of lords shows this is in reference to Jesus, therefore his image is invisible prior to manifesting himself in human form on earth.

Every eye shall see Him

There will of course be the physical manifestation of Jesus Christ upon his second coming for this is clearly recorded in the Revelation as written by John, “Behold, he cometh with clouds; and every eye shall see him, and they also which pierced him: and all kindreds of the earth shall wail because of him. Even so, Amen.” [Rev. 1:7] In closing off this Bible study therefore, seekers of faith should look to the one who is manifesting himself for all to see and to learn from him in the scriptures. This is none other than the Lord Jesus Christ, God manifest in the flesh for whosever will call upon his name will be saved by faith (Rom. 10:13). As John proclaimed in one of his letters to the early church, “In this was manifested the love of God toward us, because that God sent his only begotten Son into the world, that we might live through him.” [1 John 4:9]. Will you come to Jesus now and receive his love for you?