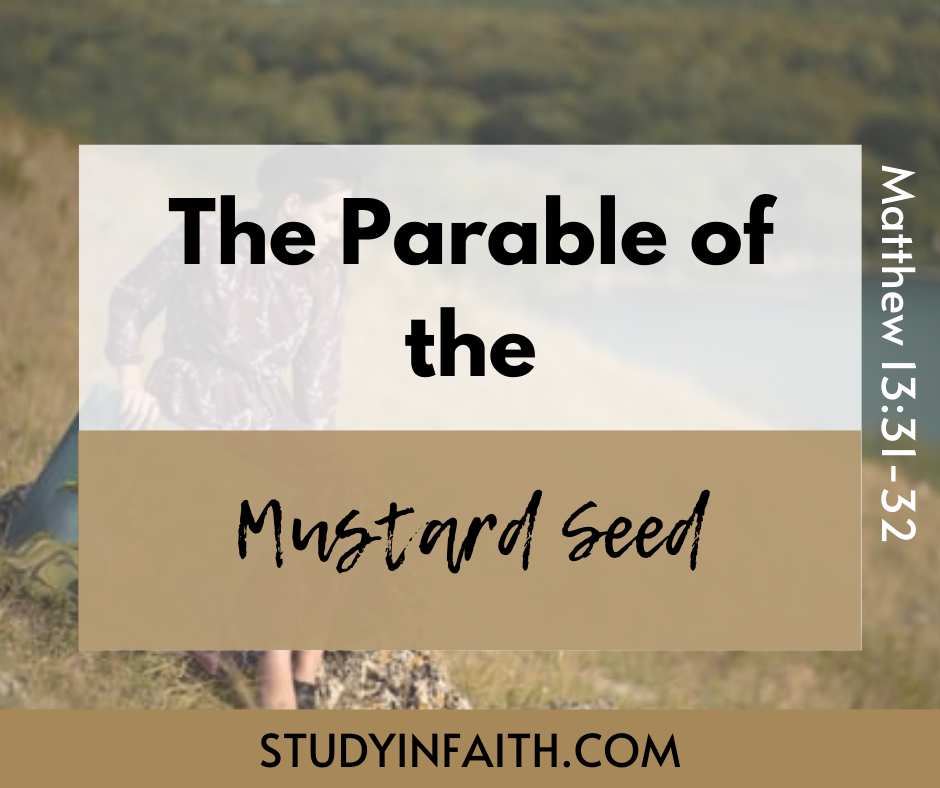 Another parable put he forth unto them, saying, The kingdom of heaven is like to a grain of mustard seed, which a man took, and sowed in his field: Which indeed is the least of all seeds: but when it is grown, it is the greatest among herbs, and becometh a tree, so that the birds of the air come and lodge in the branches thereof.

In this Bible study on the parable of the mustard seed, this is another passage of scripture that is not explained by Jesus. As with the parable of leaven, also not explained by Jesus, there is a tendency for many to interpret or interpolate something out from these parables. While there are many logical conclusions based on the other teachings of Jesus, one should be cautious of drawing dogmatic assumptions in this regard.

Therefore for this study, we shall look at the mustard seed in a similar manner as leaven since both parables were shared right after each other. This tends to support and endorse some perspective on the teachings of Jesus and what his preaching was intended to mean. Leaven as you may have seen in the previous study, was used by Jesus to illustrate something evil within the religious leaders called the Pharisees and Sadducees. Leaven being yeast that ferments within the flour, rises to great proportions impacting the entire lump of dough.

From this week’s scripture reading, the tiniest of seeds being the mustard seed, once grown, becomes a tree large enough for birds to lodge in its branches. Mustard is only mentioned five times in the Bible and only in the gospels of Matthew, Mark and Luke. Jesus used the example of a mustard seed later on to teach his disciples about faith, “And Jesus said unto them, Because of your unbelief: for verily I say unto you, If ye have faith as a grain of mustard seed, ye shall say unto this mountain, Remove hence to yonder place; and it shall remove; and nothing shall be impossible unto you. Howbeit this kind goeth not out but by prayer and fasting.” [Matt. 17:20-21]

Faith of a Mustard Seed

In this particular passage, Jesus was telling his disciples that small unwavering and resolute faith will figuratively move mountains. This is such an impactful statement from Jesus for we often think we need a momentous amount of faith, yet here he is saying even the smallest amount of true faith will be more than enough. A similar account was recorded in another gospel writing, “And the Lord said, If ye had faith as a grain of mustard seed, ye might say unto this sycamine tree, Be thou plucked up by the root, and be thou planted in the sea; and it should obey you.” [Luke 17:6] How few if any of us, have ever prayed to the Lord for faith the size of a mustard seed!

Jesus also used similar examples of least and greatest during his earthly ministry. Take for example this passage when he said to his disciples, “He that is faithful in that which is least is faithful also in much: and he that is unjust in the least is unjust also in much.” [Luke 16:10] In the same manner, Jesus is highlighting the importance of being faithful in seemingly innocuous things, perhaps something that we view as trivial or immaterial but how showing faith in them is illustrative of having faith in much larger and more impactful things in our faith walk.

Also consider this example from Jesus where he describes John the Baptist as the least in the kingdom of heaven and yet he is the greatest among men here on earth, “Verily I say unto you, Among them that are born of women there hath not risen a greater than John the Baptist: notwithstanding he that is least in the kingdom of heaven is greater than he.” [Matt. 11:11] This passage presents an interesting dichotomy that should be humbling for many who esteem themselves as being great among men in their faith and standing within Christianity.

Jesus also shared examples over obeying the smallest of commandments from God and their implications in heaven as noted, “Whosoever therefore shall break one of these least commandments, and shall teach men so, he shall be called the least in the kingdom of heaven: but whosoever shall do and teach [them,] the same shall be called great in the kingdom of heaven.” [Matt. 5:19] The teaching and preaching of Jesus always presented a common thread of godly living for his disciples and the multitudes who followed him.

This was no different than when a religious leader asked him what he should do to inherit eternal life, “Jesus said unto him, Thou shalt love the Lord thy God with all thy heart, and with all thy soul, and with all thy mind. This is the first and great commandment.” [Matt. 22:37-38] Following this, Jesus continued to instruct the man with this second commandment as shared, “And the second [is] like unto it, Thou shalt love thy neighbour as thyself.” [Matt. 22:39] As Jesus concluded this passage, he articulated the importance of these two commandments as summarizing all the law and the prophets in Matt. 22:40.

Let us also consider two more passages from the New Testament to further underscore the parable of the mustard seed and the point of smallest to greatest or least to great. On one occasion, some of the disciples asked Jesus who of them will be the greatest given that they were his close disciples. But Jesus quickly retorted by taking a child standing by and saying to the disciples something far contrary to their thinking, “And said unto them, Whosoever shall receive this child in my name receiveth me: and whosoever shall receive me receiveth him that sent me: for he that is least among you all, the same shall be great.” [Luke 9:48]

Finally, let us look at one of the apostle Paul’s writings to believers in the church from Ephesus. Paul’s journey in life from being a high and noble Pharisee, a religious leader of the Jews, to his humbling experience before Jesus, leading to his new birth in Christ, was indeed evident in his writings, “Unto me, who am less than the least of all saints, is this grace given, that I should preach among the Gentiles the unsearchable riches of Christ.” [Eph. 3:8] What a description he imposed upon himself, the least of all saints, and yet we would not know the New Testament as it is written were it not for the tireless works of Paul. This was despite relentless persecution and imprisonment during his journeys in his quest to appeal his case to the highest Roman authorities.

Let us close of this Bible study on the parable of the mustard seed by turning the focus and attention to ourselves. Quite often, as believers, we fall peril to the notion that all of our work in the faith is making us great in the eyes of both man and God. We could be falling into the trap of seeking heavenly rewards by performing countless good deeds and works all in the name of God. But we should be careful of this perspective. As John the Baptist was described as great among men but the least in the kingdom of heaven or as Paul described himself as the least of all saints, perhaps having a sense of humility is an attribute that should come with our desire to grow in our faith.

Can we honestly call ourselves the least among all saints? That is perhaps the figurative mustard seed where the above blessed teachings of Jesus will take root in someone’s soul and spirit and become the proverbial tree for the birds to come and lodge in its branches. How about you? Are you letting the Lord Jesus Christ take root inside of you as a small mustard seed, allowing him to develop you, nurture you, perhaps chastise you, in order for you to grow into the person in whom he wants you to become? Seek God in prayer for his wisdom and come to him now if you are a seeker of faith to discover new life in him for he is the one who claims to be in the scriptures, the way, the truth and the life (John 14:6).