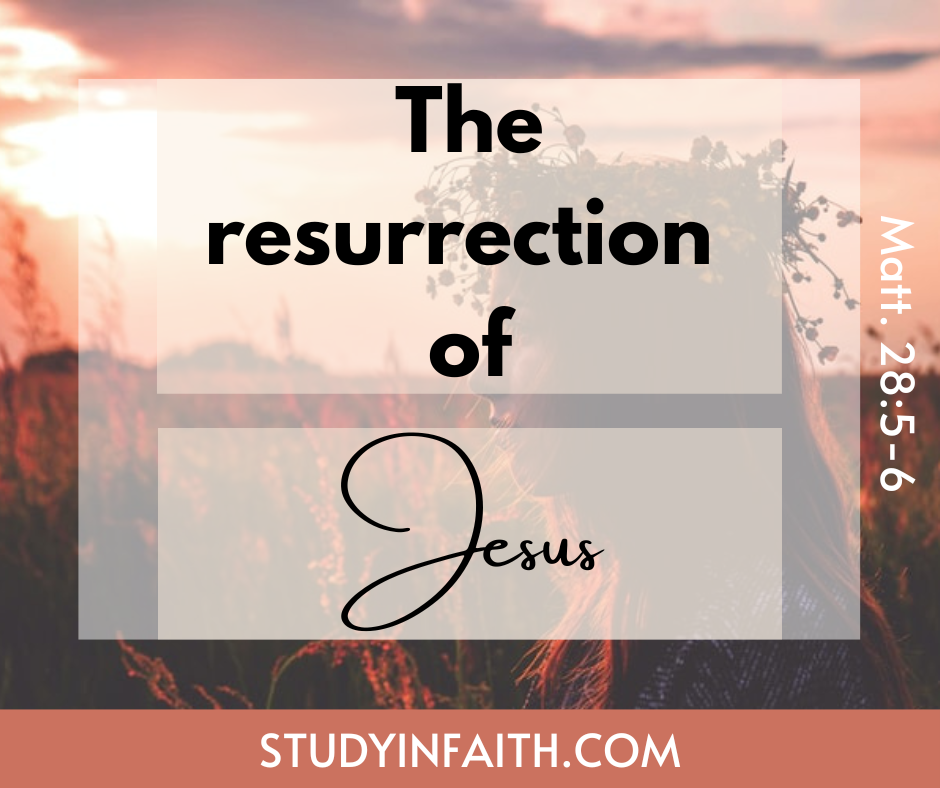 And the angel answered and said unto the women, Fear not ye: for I know that ye seek Jesus, which was crucified. He is not here: for he is risen, as he said. Come, see the place where the Lord lay.

Take for example Mary Magdalene who is noted in all four gospel accounts (Mt 28:1, Mk 16:1, Lk 24:10, Jn 20:1) as the most prominent woman who came to the sepulchre with sweet spices to anoint the body of Jesus who was presumably still dead in the tomb. Mark also adds the names of the other women at the tomb, “Mary Magdalene, and Mary the mother of James, and Salome” [Mark 16:1] As readers may recall, Mary Magdalene was at one time possessed by seven devils, “Now when Jesus was risen early the first day of the week, he appeared first to Mary Magdalene, out of whom he had cast seven devils.” [Mark 16:9] Mary Magdalene was informed by two men with angelic appearance like lightning to go and tell the disciples of Jesus that he is risen from the dead. John describes them as “two angels in white sitting” [John 20:11]

One of these men were described as a young man sitting on the right side of the sepulchre, clothed in a white long garment. The women were no doubt frightened upon seeing them but were reassured by them when they said, “Be not affrighted: Ye seek Jesus of Nazareth, which was crucified: he is risen; he is not here: behold the place where they laid him.” [Mark 16:6] Luke adds more information from the interaction between the women and these angelic like men by noting these comments, “Why seek ye the living among the dead? He is not here, but is risen: remember how he spake unto you when he was yet in Galilee, Saying, The Son of man must be delivered into the hands of sinful men, and be crucified, and the third day rise again.” [Luke 24:6]

This miraculous encounter at the sepulchre with Jesus no longer in the tomb and apparently having risen from the grave according to the angelic men caused much confusion and concern. Mary Magdalene ran to the disciples, to Peter and John as instructed and told them, “They have taken away the Lord out of the sepulchre, and we know not where they have laid him.” [John 20:2b] Upon hearing this news, Peter as usual took the lead among the disciples and ran to the sepulchre with John and they saw exactly what Mary Magdalene had described to them. Likely perplexed and not knowing what took place, the two disciples returned unto their own home.

Now to further increase the prominent role Mary Magdalene played during the resurrection of Jesus, she and the other Mary encounter him on the road. Mary Magdalene did not initially recognize Jesus and thought that perhaps he was the gardener. She asked him if he had taken the body of Jesus away and if so to let her know. But then Jesus makes himself known to her as shown in the scriptures, “Jesus saith unto her, Mary. She turned herself, and saith unto him, Rabboni; which is to say, Master. Jesus saith unto her, Touch me not; for I am not yet ascended to my Father: but go to my brethren, and say unto them, I ascend unto my Father, and your Father; and to my God, and your God.” [John 20:16-17]

The response and reaction of the disciples upon hearing the news about Jesus from Mary Magdalene is noteworthy. Luke documents this reaction from the disciples, “And their words seemed to them as idle tales, and they believed them not.” [Luke 24:11] After a short period of time, the disciples were left to ponder and discuss these events and Jesus approached them but they did not know that it was him. After listening to the men discuss the perplexity before them upon learning of the empty tomb from the women and some of them seeing this firsthand such as Peter and John, Jesus then responded to them by saying, “O fools, and slow of heart to believe all that the prophets have spoken: Ought not Christ to have suffered these things, and to enter into his glory? And beginning at Moses and all the prophets, he expounded unto them in all the scriptures the things concerning himself.” [Luke 24:25-27]

Jesus with the disciples

But now, it was time for the disciples to know that Jesus had indeed risen from the grave, that he was alive and was about to stand before them in full form and presence. “Then the same day at evening, being the first day of the week, when the doors were shut where the disciples were assembled for fear of the Jews, came Jesus and stood in the midst, and saith unto them, Peace be unto you. And when he had so said, he shewed unto them his hands and his side.” [John 20:19-20] Clearly, Jesus was showing them proof and concrete evidence that it was he who was crucified on the cross as he presented his wounds to them. Luke also adds to this context, “And as they thus spake, Jesus himself stood in the midst of them, and saith unto them, Peace be unto you. But they were terrified and affrighted, and supposed that they had seen a spirit. And he said unto them, Why are ye troubled? and why do thoughts arise in your hearts? Behold my hands and my feet, that it is I myself: handle me, and see; for a spirit hath not flesh and bones, as ye see me have. And when he had thus spoken, he shewed them his hands and his feet.” [Luke 24:36-40]

Here is the most interesting point in all of this as all eleven disciples were meeting Jesus in Galilee and yet look how the scriptures describe their encounter with him, “And when they saw him, they worshipped him: but some doubted.” [Matt. 28:17] That verse needs to read a second time for impact, …”some doubted”. To think that his disciples had been witness to the teaching, preaching and healings of Jesus, witnessed his mock trials, his crucifixion and yet some doubted after all of this transpired that it was indeed Jesus standing before them. Mark adds in his gospel account that Jesus, “…upbraided them with their unbelief and hardness of heart, because they believed not them which had seen him after he was risen.” [Mark 16:14] John references an incredible encounter between Jesus and Thomas who refused to believe unless he put his own hands in the wounds on Jesus body! (John 20:24-28)

As Jesus continued to meet with his disciples, he recounted his many conversations with them while he was with them and how all the things he spoke about had to be fulfilled according to the scriptures. This involved what was written in the law of Moses, the prophets, and the Psalms concerning him. Luke adds excellent points from Jesus in reference to this prophetic fulfillment in the passage, “And said unto them, Thus it is written, and thus it behoved Christ to suffer, and to rise from the dead the third day: And that repentance and remission of sins should be preached in his name among all nations, beginning at Jerusalem.” [Luke 24:44] It was after this time of understanding from his disciples when he then placed on them the Holy Spirt as recorded by John, “Then said Jesus to them again, Peace be unto you: as my Father hath sent me, even so send I you. And when he had said this, he breathed on them, and saith unto them, Receive ye the Holy Ghost:” [John 20:21-22] The resurrection of Jesus continues now with his ascension to heaven.

This brings us to the closure of the events surrounding the resurrection of Jesus with his concluding remarks to the disciples. They are noted by Matthew’s account, “And Jesus came and spake unto them, saying, All power is given unto me in heaven and in earth.” [Matt. 28:19] What an incredible statement, all power in heaven and in earth and yet the trademark character of Jesus was humility and charity. From there Jesus instructed his disciples of the great commission to go and preach the gospel to all nations of the world, “…baptizing them in the name of the Father, and of the Son, and of the Holy Ghost: Teaching them to observe all things whatsoever I have commanded you: and, lo, I am with you alway, even unto the end of the world. Amen.” [Matt. 28:20-21] Mark adds a very poignant element to their witnessing efforts from Jesus, “And he said unto them, Go ye into all the world, and preach the gospel to every creature. He that believeth and is baptized shall be saved; but he that believeth not shall be damned.” [Mark 16:15-16]

Jesus finally empowers his disciples with miraculous and amazing powers as noted further by Mark. The disciples were empowered to cast out devils, speak in new languages, be unharmed by deadly serpents or poisons, and to have power in healing the sick. At that point, Jesus was then taken up into heaven in the clouds as documented in two gospel accounts with Mark’s account noted herein, “So then after the Lord had spoken unto them, he was received up into heaven, and sat on the right hand of God. And they went forth, and preached every where, the Lord working with them, and confirming the word with signs following. Amen.” [Mark 16:19] John provided a fitting closure to his gospel account by remarking, “But these are written, that ye might believe that Jesus is the Christ, the Son of God; and that believing ye might have life through his name.” [John 20:31]

Astonishingly, after all the events that transpired, the scriptures record how the corrupt and hypocritical Pharisees paid off the soldiers to lie and claim the disciples came and stole the body of Jesus away during the night. With hearts of darkness they went off to their own perdition from the words of Jesus “…but he that believeth not shall be damned.” Why not take this time now, come to Jesus in repentance and believe in him for eternal life today and forever!