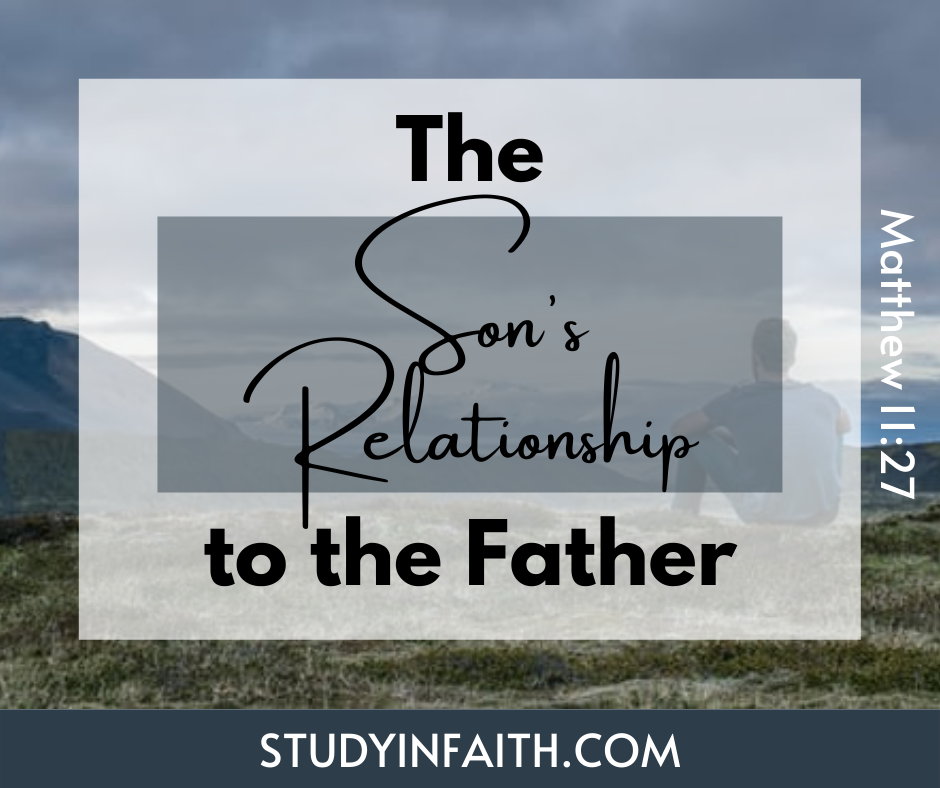 All things are delivered unto me of my Father: and no man knoweth the Son, but the Father; neither knoweth any man the Father, save the Son, and [he] to whomsoever the Son will reveal [him.

In this Bible study on the Son’s relationship to the Father, there is a very clear portrayal of the incredibly close personal relationship between the heavenly Father and the Son. This is the type of verse that if quickly glossed over it may read a bit confusing or even be mistaken for a sense of double talk. Why is this so, well most people view the heavenly Father as the ultimate and supreme God and yet look at the first part of the verse. Jesus proclaims that all things are delivered unto himself. This is an absolute statement in and of itself. Jesus does not say a few, or some, or most, or half, but all things.

So why would the ultimate and supreme heavenly Father deliver all things to the Son? We will soon find this out but first notice how Jesus proceeds to make another bold claim to an obviously very Jewish audience. They were no doubt accustomed to worshipping God but Jesus tends to exclude them in the next statement. He said that no one knows the Son but the Father and no one knows the Father but the Son. This presents a relationship of extreme exclusivity between the Father and the Son. It also brings to the forefront the mediatory role of Jesus between the Father and humanity. This point is further embellished in the description of the relationship between the Father and the Son from a comment Jesus makes, “The Father loveth the Son, and hath given all things into his hand.” [John 3:35] Again, make note of the all encompassing phraseology.

With some context in place for this week’s scripture reading, let us now delve deeper into the scriptures to explore and build a case around the relationship between the Father and Son and his mediatory role. For this, let us note the definitive and absolute statement Jesus shares by proclaiming “all” used once again by Jesus, “All that the Father giveth me shall come to me; and him that cometh to me I will in no wise cast out.” [John 6:37] What does Jesus mean when he says that he will not cast anyone out? Looking further on in the book of John, we see the answer to this, “As thou hast given him power over all flesh, that he should give eternal life to as many as thou hast given him.” [John 17:2] The phraseology again becomes all encompassing with power over all flesh, or perhaps better phrased, over all of humanity.

But although Jesus often preached this message during his earthly ministry many of the skeptical Jews challenged him frequently in their attempt to refute his words. This is why the response from Jesus tended to come out as admonitions to the Jews, “Then said they unto him, Where is thy Father? Jesus answered, Ye neither know me, nor my Father: if ye had known me, ye should have known my Father also.” [John 8:19] The point he was making highlighted the fact that they did not even know God and therefore clearly did not comprehend the Son’s relationship to the Father.

Interestingly, some of Jesus’ closest disciples were even confused over his relationship to the Father. Take for example, Phillip who was notably with Jesus from early on and yet he mistakenly asked Jesus for further proof, “Jesus saith unto him, Have I been so long time with you, and yet hast thou not known me, Philip? he that hath seen me hath seen the Father; and how sayest thou [then,] Shew us the Father?” [John 14:9] Jesus was once again presenting the unique relationship he had with the Father, “I and [my] Father are one.” [John 10:30] Not only was this last statement describing his relationship with the Father but it also defined his divinity as God himself. This is evidenced by noting the point that the Jews went to stone him for blasphemy over this statement as noted in John 10:33.

Further evidence of his claim to deity is presented earlier on by Jesus when he addressed the Jews, “But Jesus answered them, My Father worketh hitherto, and I work.” [John 5:17] Again the reaction from the Jews confirmed that his comments as the Son of God made himself out to be equal with God in the very next verse. After false accusations from the Jews however, Jesus continued to embellish upon his relationship with the Father, “The Son can do nothing of himself, but what he seeth the Father do: for what things soever he doeth, these also doeth the Son likewise.” [John 5:19b]

The entire commentary from Jesus continues right through to John 5:27 illustrating the back and forth interrelationship between the Father and the Son. Perhaps the most compelling verse in this collection of proclamations from Jesus is noted in this passage, “Verily, verily, I say unto you, He that heareth my word, and believeth on him that sent me, hath everlasting life, and shall not come into condemnation; but is passed from death unto life.” [John 5:24] If readers ever wanted to know the gospel message, here it it is in one single verse from Jesus while at the same time presenting the Son’s relationship to the Father.

Further to these passages of scripture, consider the response from Jesus when Thomas said to him that the disciples did not know where he was going in the future. Again, Jesus preached a message of exclusivity in that there is absolutely no other way to the Father but through him, “Jesus saith unto him, I am the way, the truth, and the life: no man cometh unto the Father, but by me.” [John 14:6] Here is the pivotal point in all of this, Jesus is the eternal path to the Father. No one comes to the Father except through Jesus.

The Way, the Truth and the Life

Let us now explore another passage of scripture to further entrench the unique and remarkable relationship between the Father and the Son. This one is presented in a prayer of Jesus to the heavenly Father as recorded by the apostle John and for the sake of accurate clarity and contextual understanding a portion of it is noted in its entirety.

These words spake Jesus, and lifted up his eyes to heaven, and said, Father, the hour is come; glorify thy Son, that thy Son also may glorify thee: As thou hast given him power over all flesh, that he should give eternal life to as many as thou hast given him. And this is life eternal, that they might know thee the only true God, and Jesus Christ, whom thou hast sent. I have glorified thee on the earth: I have finished the work which thou gavest me to do. And now, O Father, glorify thou me with thine own self with the glory which I had with thee before the world was.

Eternal Relationship with the Father

Let us close off this Bible study on the Son’s relationship to the Father by noting once again the words of Jesus as he proclaims his indescribable power, “And Jesus came and spake unto them, saying, All power is given unto me in heaven and in earth.” [Matt. 28:18] These statements as indicated at the beginning of this study were always descriptions of all inclusiveness. In this case it is all power in heaven and earth, leaving no room for discussion or digression of thought by thinking or imagining anything contrary to the words expressed by Jesus and his apostles.

Perhaps in looking back on this Bible study, you have reflected upon how you may have previously viewed Jesus as nothing more than a man who was a good moral teacher. Perhaps you belong to an organization that while it embodies the words of Christianity, it does not hold to the view of Jesus as the true and only way to the Father. Maybe that organization requires work on your part to get to heaven as if we could ever do anything comparable to Jesus! Perhaps you are of a different faith altogether and have never considered who Jesus really is in the Bible. Regardless of where you are and where you have come from, readers are encouraged to study the scriptures to uncover the truth of who Jesus really is and how you can become a Christian.

Becoming a Christian does not happen from just having head knowledge about the scriptures. It happens by knowing Jesus. Knowing that Jesus is the Son of God, who came to earth manifest in the flesh, who lived a sinless life and was crucified on the cross as the atonement for your sins. He paid the ultimate sacrifice. The only sacrifice that could atone for your sins. He did it all for you. Will you come to him and place your faith in his death, burial and resurrection as atonement for your sins? You can have eternal life today by coming to him now in prayer, asking him for forgiveness of your sins, which we all have, and in believing that Jesus is the Christ, the Son of God and Lord of your life. Why not make the decision today that will last for eternity!