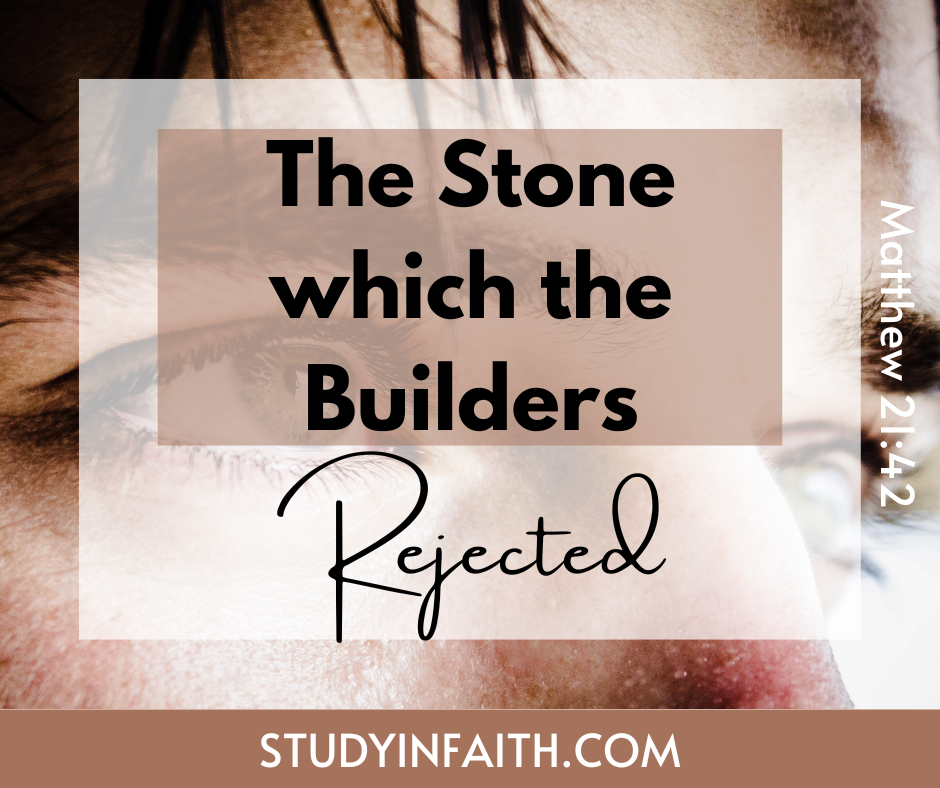 Jesus saith unto them, Did ye never read in the scriptures, The stone which the builders rejected, the same is become the head of the corner: this is the Lord’s doing, and it is marvellous in our eyes?

What is a Cornerstone

In this Bible study called the stone which the builders rejected, Jesus gives reference to a stone as the head of the corner. In ancient building construction, a cornerstone was used from which to build all other stones upon. This stone was considered the foundational stone for support and alignment for the structure and other stones in the building process. But why is Jesus talking about construction with terms like builders and cornerstones while preaching to the multitudes?

Well, this is a metaphor in scripture meant to relate to something more important than a simple example of construction. The builders could be interpreted many ways such as the Jews in general, or the religious leaders of the Jews, or people in general, as in the multitudes. The important point to note in this scripture is that the builders rejected the stone but they did not realize it was the very cornerstone that they rejected. You may be thinking, okay what is the significance of the cornerstone in the Bible?

Who is the Cornerstone

With that said, we shall now explore several scriptures to build a case and demonstrate to readers that the cornerstone that was rejected was the Lord Jesus Christ. The first reference worth noting is that Jesus was actually quoting from David’s writing in the book of Psalms. This particular verse is quoted verbatim as shown in this passage, “The stone which the builders refused is become the head stone of the corner. This is the LORD’S doing; it is marvellous in our eyes.” [Ps. 118:22] It is also important to note that other writers of the gospel accounts documented this event with Jesus as recorded in Mark 12:10 and Luke 20:17.

Let us now explore a very important passage of scripture from the Acts of the Apostles and Peter’s early efforts of witnessing to people for the gospel message. This takes place in Acts chapter four when Peter is up against several religious authorities facing persecution for his belief in Christ. Peter first starts out by addressing them as noted here, “Then Peter, filled with the Holy Ghost, said unto them, Ye rulers of the people, and elders of Israel.” [Acts 4:8] Jumping back to the term builders, you will quickly find out that Peter uses it in reference to the people he is now about to address.

Peter then starts to address the group of people by saying, “If we this day be examined of the good deed done to the impotent man, by what means he is made whole; Be it known unto you all, and to all the people of Israel, that by the name of Jesus Christ of Nazareth, whom ye crucified, whom God raised from the dead, even by him doth this man stand here before you whole.” [Acts 4:9-10] This is a powerful and impactful statement from Peter that is worth noting. He eclipses the gospel message within it by identifying Jesus Christ of Nazareth, his crucifixion and his resurrection!

Peter then continues on by stating the same message that Jesus quoted from the Old Testament some time before bringing us back to this week’s scripture reading, “This is the stone which was set at nought of you builders, which is become the head of the corner.” [Acts 4:11] Note the direct comment Peter makes with “you builders” for his intended audience. It was the Jews and religious leaders of the Jews who ultimately rejected Jesus as the Christ, as the Son of God, and as the saviour of the world. While the Roman rulers cast sentence upon Jesus to be scourged and crucified it was the religious rulers who were complicit in influencing this act of rejection and defiance.

Peter then culminates his comments and indictment upon them by highlighting the exclusive nature of Jesus as noted in this passage, “Neither is there salvation in any other: for there is none other name under heaven given among men, whereby we must be saved.” [Acts 4:12] That is worth repeating, salvation is found in no one else other than the Lord Jesus Christ. He is the atoning sacrifice for the sins of mankind, he is the redeemer, he is the one who will take your sins away and in exchange give you new spiritual life, a new heart and impute his righteousness upon you. Amen!

To further continue along in this study on the stone which the builders rejected, let us also look at another reference Paul made. This takes place in one of his other letters to the early church where he describes our position as saints in Christ. Paul articulates this point in the following passage with a notable highlight in reference to the corner stone.

For through him we both have access by one Spirit unto the Father. Now therefore ye are no more strangers and foreigners, but fellowcitizens with the saints, and of the household of God; And are built upon the foundation of the apostles and prophets, Jesus Christ himself being the chief corner stone; In whom all the building fitly framed together groweth unto an holy temple in the Lord: In whom ye also are builded together for an habitation of God through the Spirit.

While a bit lengthy, this passage outlines several key points for believers. The phrase access by one Spirit represents how every believer is indwelt by the Holy Spirit (1 Cor. 6:19). Paul reiterates that Jesus Christ is the chief corner stone of the Christian faith. As believers, we represent the building fitly framed together, in whom we are built together through the Spirit.

Building upon the Cornerstone

Consider also how the apostle Peter describes this in a passage from one of his letters, “Ye also, as lively stones, are built up a spiritual house, an holy priesthood, to offer up spiritual sacrifices, acceptable to God by Jesus Christ. Wherefore also it is contained in the scripture, Behold, I lay in Sion a chief corner stone, elect, precious: and he that believeth on him shall not be confounded. Unto you therefore which believe he is precious: but unto them which be disobedient, the stone which the builders disallowed, the same is made the head of the corner, And a stone of stumbling, and a rock of offence, even to them which stumble at the word, being disobedient: whereunto also they were appointed.” [1 Peter 2:5-8]

The above passages of scripture help to demonstrate the incredibly congruent message within the Bible with Jesus being the chief corner stone of the Christian faith. This congruency even dates back to the Old Testament with writings from the prophets such as this passage from Isaiah when he said, “And he shall be for a sanctuary; but for a stone of stumbling and for a rock of offence to both the houses of Israel.” [Is. 8:14a]

A similar remarkable passage was written by Isaiah further on through his prophetic messages written several centuries before Jesus as manifest on earth, “Therefore thus saith the Lord GOD, Behold, I lay in Zion for a foundation a stone, a tried stone, a precious corner stone, a sure foundation: he that believeth shall not make haste.” [Is. 28:16]

Belief in the Cornerstone

Let us close off this Bible study on the stone which the builders rejected. As Isaiah noted above, Jesus clearly is the precious corner stone and a sure foundation. But as Isaiah also wrote, this corner stone is also seen by many as a stone of stumbling and a rock of offence. This tends to parallel the scripture from the apostle John who wrote in his introduction from his gospel account by stating, “And the light shineth in darkness; and the darkness comprehended it not.” [John 1:5]

Sadly, it was written in the scriptures by the apostle John how the world, or the people of the world did not even know him and that his very own people did not even receive him as shown in this passage of scripture, “He was in the world, and the world was made by him, and the world knew him not. He came unto his own, and his own received him not.” [John 1:10-11]

What about you dear reader and seeker of faith? Now that you have seen countless scriptural references highlighting how Jesus is the chief corner stone, how will you react to this information? Will you also continue to know him not and receive him not as the people did back then and still do today? Will you ultimately reject him as the builders did in the New Testament? If so, think about this.

Did you know that God loves you so much he sent his only begotten Son into the world to save you from your sins as noted, “For God so loved the world, that he gave his only begotten Son, that whosoever believeth in him should not perish, but have everlasting life.” [John 3:16] He is the chief corner stone and from his own words Jesus tells us that we need to believe in him for his saving grace, atonement of our sins and redemption. This he provided through his sacrificial death on the cross, burial and resurrection.

But we must believe through faith because consider how Jesus warned people of the consequences for their unbelief, “I said therefore unto you, that ye shall die in your sins: for if ye believe not that I am he, ye shall die in your sins.” [John 8:24] What does he mean when he says, that I am he? Jesus is the great I am! Jesus proclaimed, “I am the way, the truth, and the life: no man cometh unto the Father, but by me.” [John 14:6b]

Will you come to him now, will you believe on him for salvation or will Jesus continue to be the stone which the builders rejected? He is the only way to the heavenly Father, he is the only giver of eternal life but you must believe. Someone in the Bible once asked two disciples, what must I do to be saved? Paul and Silas replied with this simple but profound message, “And they said, Believe on the Lord Jesus Christ, and thou shalt be saved, and thy house.” [Acts 16:31] Why not believe today and be saved for eternity from your sins?