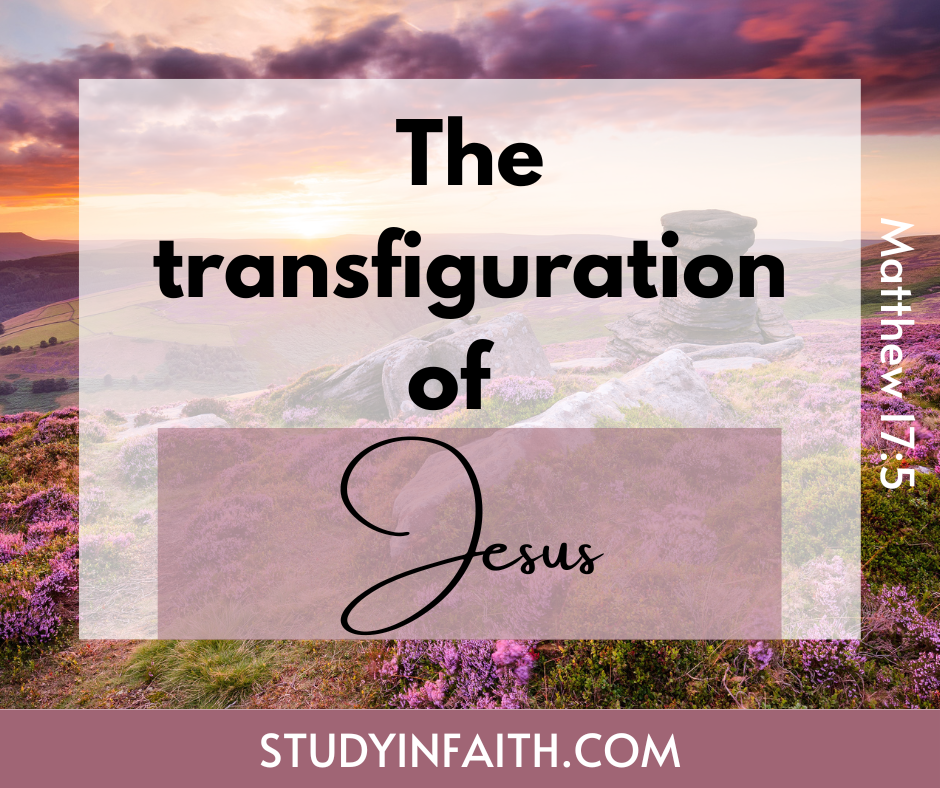 And after six days Jesus taketh Peter, James, and John his brother, and bringeth them up into an high mountain apart, And was transfigured before them: and his face did shine as the sun, and his raiment was white as the light.

A Sight to Behold

In this Bible study called the transfiguration of Jesus, something truly miraculous just happened. The closest disciples of Jesus were chosen to be eye witnesses to a spectacular event in history. It was here at this moment, where Jesus was manifest in his heavenly glory before his disciples. The word transfiguration is only recorded twice in the Bible and it was during this singular event when Jesus gave his disciples a momentary glimpse of how he truly appears in heaven. Quite often people become fixated on Jesus as just a man and there are many artistic renderings of what he could have looked like during that time. It is important to know that Jesus was not merely a man but was God manifest in the flesh, “And without controversy great is the mystery of godliness: God was manifest in the flesh, justified in the Spirit, seen of angels, preached unto the Gentiles, believed on in the world, received up into glory.” [1 Tim. 3:16]

There a many interesting and noteworthy points that can be drawn from this event in history. First of all, why were Peter, James and John the only disciples chosen among all disciples? Historic records in scripture show the frequency of these three individuals partaking of special events and circumstances during the earthly ministry of Jesus and after his resurrection. The second point of observation is why were Moses and Elias present with him and what was the significance of them with Jesus, “And, behold, there appeared unto them Moses and Elias talking with him.” [Matt. 17:3] Well for one thing, it certainly illustrates the fact that eternal life is timeless since these individual lived countless centuries before Jesus was manifest on earth. But how notable it is to see their presence here with Jesus considering the impact they had in the Old Testament and to be now in conversation with the Lord Jesus on earth! One would no doubt aspire to be the proverbial fly on the wall to hear the conversation that must have taken place.

Consider also the bewildering reaction from the disciples upon seeing this vision and their response to Jesus, “Then answered Peter, and said unto Jesus, Lord, it is good for us to be here: if thou wilt, let us make here three tabernacles; one for thee, and one for Moses, and one for Elias.” [Matt. 17:4] As usual, it was Peter who spoke up first in making this gesture for the three men standing before them. As if this event was not enough for one day and yet it was not over. For the next scene in this event was the intervention of the heavenly Father being manifest in a bright cloud, “While he yet spake, behold, a bright cloud overshadowed them: and behold a voice out of the cloud, which said, This is my beloved Son, in whom I am well pleased; hear ye him.” [Matt. 17:5] What an endorsement from the Father upon Jesus in this statement that was not only intended for the disciples but also for Moses and Elias.

As natural reaction would have it the disciples fell on their face upon hearing this voice from heaven and were very afraid. But this is where the compassion of the Lord Jesus comes along, “And Jesus came and touched them, and said, Arise, and be not afraid.” [Matt. 17:7] Then just like that, the vision was over and the disciples only saw Jesus standing there with them. Following this, Jesus charged them not to disclose this vision to anyone until he had risen from the dead. Oh to be one of those select disciples of that day, walking and conversing so closely with the Lord of glory, being eye witness to miracles from the healings of Jesus, listening to his every word of teaching and preaching, what a cherished existence in time.

Let us now transition the focus of this study on the transfiguration of Jesus to his noted appearance, “…and his face did shine as the sun, and his raiment was white as the light.” [Matt. `7:2] Does this not harmonize with Jesus’s proclamation to the people, “Then spake Jesus again unto them, saying, I am the light of the world: he that followeth me shall not walk in darkness, but shall have the light of life.” [John 8:12]

Or consider the writings of the apostle, “Again, a new commandment I write unto you, which thing is true in him and in you: because the darkness is past, and the true light now shineth.” [1 John 2:8] Consider also how the writer of Hebrews describes Jesus, “Who being the brightness of [his] glory, and the express image of his person.” [Heb. 1:3]

Finally, consider how the apostle John described another vision of the Lord Jesus Christ near the end of Revelation , “And the city had no need of the sun, neither of the moon, to shine in it: for the glory of God did lighten it, and the Lamb [is] the light thereof.” [Rev. 21:23] All these scripture verses should come as no surprise to people of faith for the apostle also proclaimed in another letter, “This then is the message which we have heard of him, and declare unto you, that God is light, and in him is no darkness at all.” [1 John 1:5]

The Darkness of Man

But here is the sad reality of humanity. While the Bible frequently describes God as light and as the light of the world, the Bible also described mankind as the opposite and that is darkness. Take careful note how John describes this juxtaposition between Jesus and mankind, “In him was life; and the life was the light of men. And the light shineth in darkness; and the darkness comprehended it not.” [John 1:4-5] This was the tragedy of the day back then because Jesus came into the world but the world did not know him (John 1:10). The world is another term for humanity or the people of that time. Further, Jesus came unto his own, meaning the Jews, but they did not receive him (John 1:11).

Jesus spoke further about this worldly dilemma during his earthly ministry by describing the situation, “And this is the condemnation, that light is come into the world, and men loved darkness rather than light, because their deeds were evil. For every one that doeth evil hateth the light, neither cometh to the light, lest his deeds should be reproved. But he that doeth truth cometh to the light, that his deeds may be made manifest, that they are wrought in God.” [John 3:19-21] This is how deep our sin is in our lives, we love darkness rather than light, because our deeds are evil. It is no different today as it was in the days of Jesus. Humanity prides and parades itself in darkness rather than repentance and humility before a holy God.

Are you in Darkness?

Let us draw this Bible study on the transfiguration of Jesus to a close by asking ourselves this pivotal question. Are we living in darkness as described in the scriptures? It has often been said that the Bible will keep you from sin or sin will keep you from the Bible. How about you dear reader, are you falling before and worshipping the alter of sin in your life? Is sin on the throne instead of the Lord Jesus Christ?

Why not make the decision to believe in the Lord Jesus who paid the penalty for your sins, who took them upon himself, who knew no sin in himself, but took yours and mine and atoned for them by giving his life for you and me? Make that decision now and have the assurance that one day you will see Jesus in all his glory and light for eternity!