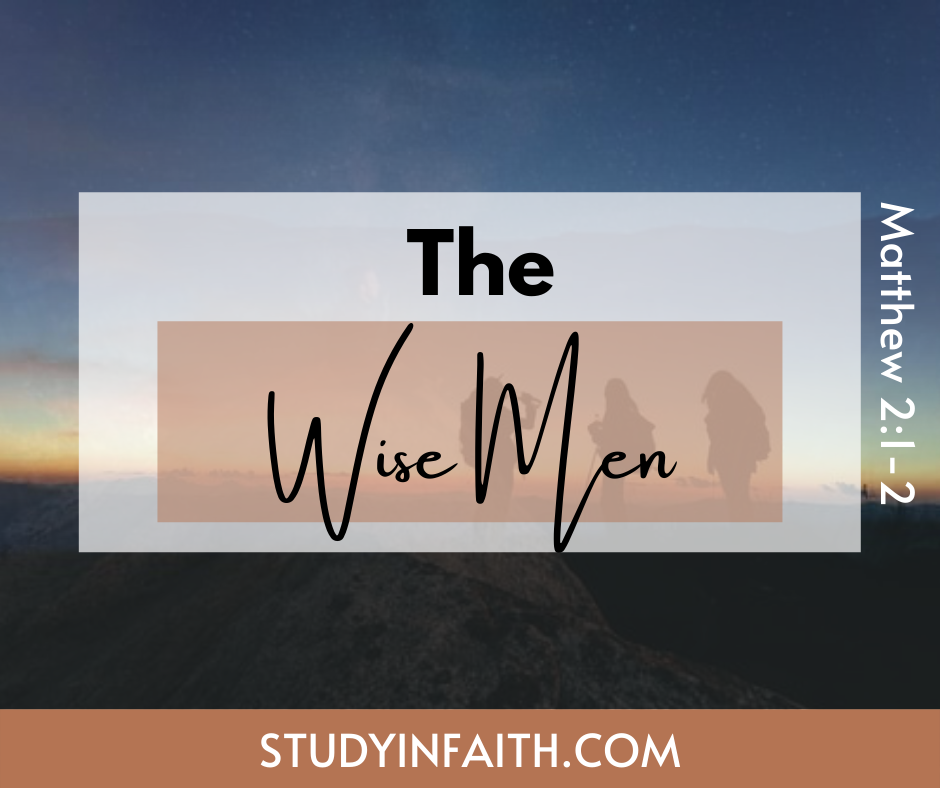 Now when Jesus was born in Bethlehem of Judaea in the days of Herod the king, behold, there came wise men from the east to Jerusalem, Saying, Where is he that is born King of the Jews? for we have seen his star in the east, and are come to worship him.

The scriptures do not specifically indicate the number of the wise men or that they were kings often called the magi. It is only surmised that there were three because of the three gifts presented to Jesus but there may very well have been an entourage with them. The wise men in the Bible are only noted in Matt. 2:1-12. No other gospel account makes record of them but since Matthew detailed the birth of Jesus it is only fitting that his account includes them. So the wise men are very much isolated to the gospel according to Matthew for those seeking facts about them.

Very little is also known of the event where the wise men brought gifts to Jesus other than that they were described as being wise, they traveled from some eastern location and were searching for one born of noble descent bearing an important title with whom they desired to worship. Any other information on them is not recorded in scripture and has given way to much conjecture over time such as nativity scenes with three wise men portrayed near the manger at the time of Jesus’ birth.

This was not the case though, “And when they were come into the house, they saw the young child with Mary his mother, and fell down, and worshipped him: and when they had opened their treasures, they presented unto him gifts; gold, and frankincense, and myrrh.” [Matt. 2:11] It is noteworthy to mention that the wise men followed something to find Jesus, “Saying, Where is he that is born King of the Jews? for we have seen his star in the east, and are come to worship him.” [Matt. 2:2] Lastly, scripture does not list the three wise men names but this tends to place the emphasis on the more important aspect of their encounter with Jesus Christ as the coming Messiah in history.

With that said, let us now have a look at the three gifts presented to Jesus from the wise men since they are most notable throughout biblical history. Gold is recorded right back in the first book of the Bible as something of intrinsic value, “And the gold of that land is good.” [Gen. 2:12a] Another early reference to gold was mentioned with a most notable patriarch, “And Abram was very rich in cattle, in silver, and in gold.” [Gen.13:2] In the future, gold is used to describe or comprise a large part of the new Jerusalem, “…and the city was pure gold, “…and the street of the city was pure gold,” [Rev. 21:18, 21], thus gold is illustrative of great worth, purity and value. In short, gold is noted over four hundred times in scripture and is mentioned in forty two books, making it a very popular and important topic. It was certainly a gift befitting of the king!

Frankincense on the other hand is only mentioned seventeen times throughout scripture in eight books. It was referred to in Leviticus during detailed instructions for burnt offerings as prepared by the high priest unto God, “And when any will offer a meat offering unto the LORD, his offering shall be [of] fine flour; and he shall pour oil upon it, and put frankincense thereon: And he shall bring it to Aaron’s sons the priests: and he shall take thereout his handful of the flour thereof, and of the oil thereof, with all the frankincense thereof; and the priest shall burn the memorial of it upon the altar, [to be] an offering made by fire, of a sweet savour unto the LORD.” [Lev.2:1-2] Frankincense is also noted in books such as the Song of Solomon and once in Revelation. As an aromatic gum resin derived from trees, its use ranged from compositions within incense, for religious and sacrificial offerings and for therapeutic purposes. Nevertheless, the wise men presented frankincense as part of their respect and reverence for the King of the Jews.

Similarly, myrrh, another gum resin, is only mentioned seventeen times in scripture, in nine books, typically along with a list of foods and spices dating back to the book of Genesis. It is also referenced in the Song of Solomon during romantic descriptions of beloved couples as a sweet smelling, perfume like aroma, “His cheeks [are] as a bed of spices, [as] sweet flowers: his lips [like] lilies, dropping sweet smelling myrrh.” [Sol. 5:13] Interestingly, myrrh is only mentioned three times in the New Testament with all of them pertaining to Jesus. It was presented to Jesus by the wise men while as a young child in recognition of him as the coming King of the Jews [Matt. 2:1]. It was also presented to Jesus while he was dying on the cross from Roman crucifixion, “And they gave him to drink wine mingled with myrrh: but he received [it] not.” [Mark 15:23] The third time though is most noteworthy as noted below.

Myrrh was used at the time of the burial preparation for Jesus after his crucifixion, “And there came also Nicodemus, which at the first came to Jesus by night, and brought a mixture of myrrh and aloes, about an hundred pound [weight.] Then took they the body of Jesus, and wound it in linen clothes with the spices, as the manner of the Jews is to bury.” [John 19:39-40] This was a very notable moment involving Nicodemus, a ruler of the Jews, who once inquired of Jesus as follows, “The same came to Jesus by night, and said unto him, Rabbi, we know that thou art a teacher come from God: for no man can do these miracles that thou doest, except God be with him.” [John 3:2] While it will be discussed in later Bible studies, this statement served as the catalyst for a remarkable discourse between Jesus and Nicodemus on the importance of being born again in order to see the kingdom of God [John 3:3, 7].

The Rage of Herod

Returning back now to the wise men, their very presence was no doubt troubling for the apparently insecure, paranoid and maniacal Herod, a Roman leader [Matt. 2:3]. In turn, all of Jerusalem was troubled. The very notion of an upcoming king potentially as his rival and at worst usurping his throne of leadership and power would be untenable. As it was, when he realized the wise men had mocked him he then issued a decree to kill all male children in Bethlehem two years and under; an act that was cowardly and diabolically wicked. This proved though to be an unsuccessful approach in his futile attempt to outwit God’s plans for the King of the Jews. The particular event from Herod was also prophesied by Jeremiah the prophet, “Then was fulfilled that which was spoken by Jeremy the prophet, saying, In Rama was there a voice heard, lamentation, and weeping, and great mourning, Rachel weeping [for] her children, and would not be comforted, because they are not.” [Matt. 2:17-18]

The King of the Jews

So here are the wise men, first making an appearance in Jerusalem and then in Bethlehem with a mysterious star guiding their way. Contrast this now with Mary, the mother of Jesus and Joseph, who observed all this outlandish recognition and adoration related to noble lineage, while they themselves came from rather humble surroundings. With this said, let us now look at the notable phrase associated with the coming of Jesus.

The wise men’s phrase, King of the Jews, also comes with an interesting correlation to his ultimate crucifixion, “And when they had platted a crown of thorns, they put [it] upon his head, and a reed in his right hand: and they bowed the knee before him, and mocked him, saying, Hail, King of the Jews!” [Matt.27:29] This phrase was then further noted in the title ascribed above Jesus on the cross by Pilate, “And set up over his head his accusation written, THIS IS JESUS THE KING OF THE JEWS.” [Matt. 27:37] Pilate, the Governor of Judea during that time, ordered this sign to be written in Hebrew, Greek and Latin [John 19:20]. This was despite objections from the ruling Jews who with great envy, vehemently opposed such a proclamation.

King of kings & Lord of lords

To close of this Bible Study on the wise men an encouraging and complementary passage to the phrase King of the Jews is recorded in scripture, “That thou keep [this] commandment without spot, unrebukeable, until the appearing of our Lord Jesus Christ: Which in his times he shall shew, [who is] the blessed and only Potentate, the King of kings, and Lord of lords.” [1 Tim. 6:14-15] To add more to this majestic passage another related verse is also noted prophetically in future context, “These shall make war with the Lamb, and the Lamb shall overcome them: for he is Lord of lords, and King of kings: and they that are with him [are] called, and chosen, and faithful.” [Rev. 17:14] This common thread throughout scripture is most notable of the Lord Jesus Christ, for he was not only declared to be the King of the Jews, but he also carries the sole designation as the King of kings and Lord of lords!

For reference, here are some frequently asked questions that are answered in this Bible Study. It is with sincere prayer that they have been answered through carefully researched and written commentary for seekers of faith. The absence of answers in the study is perhaps indicative that the events and circumstances were deemed less worthy of documentation in the overall importance of biblical scripture. What are the names of the 3 wise kings? Where did the 3 wise men come from? Who were the three wise men and what did they do? The wise men in the Christmas story. The wise men followed this to find Jesus.