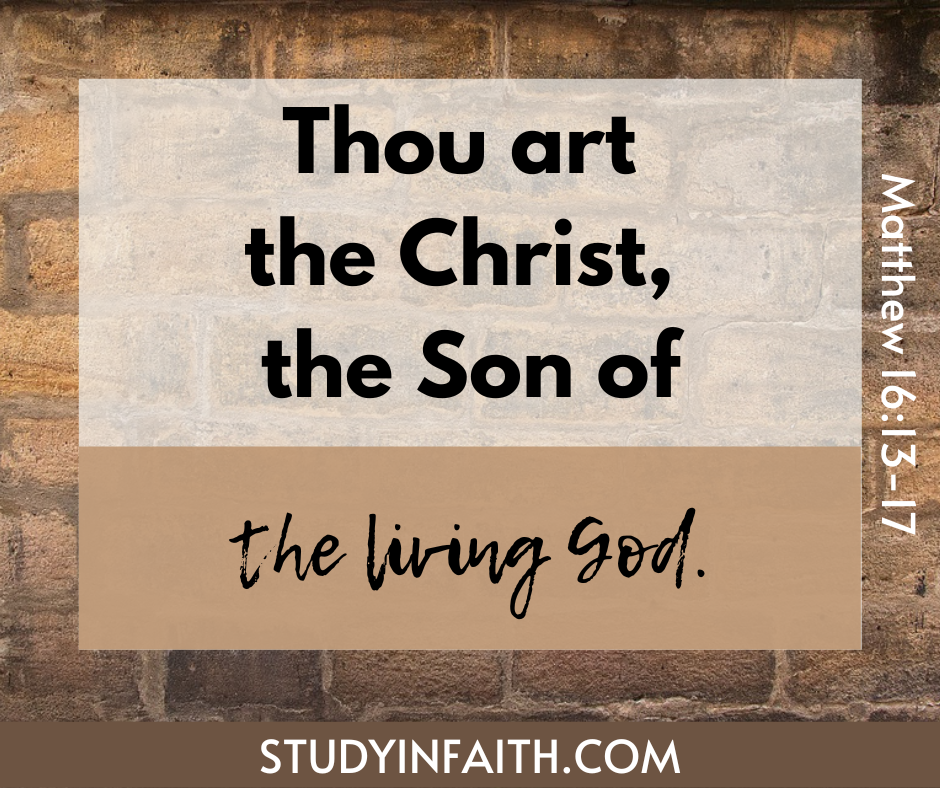 When Jesus came into the coasts of Caesarea Philippi, he asked his disciples, saying, Whom do men say that I the Son of man am? And they said, Some [say that thou art] John the Baptist: some, Elias; and others, Jeremias, or one of the prophets. He saith unto them, But whom say ye that I am? And Simon Peter answered and said, Thou art the Christ, the Son of the living God. And Jesus answered and said unto him, Blessed art thou, Simon Barjona: for flesh and blood hath not revealed [it] unto thee, but my Father which is in heaven.

In this study called thou art the Christ, the Son of the living God, there was no doubt the people of that era were awaiting for the coming Messiah. This was evident not only with the Jews but also within other ethnic communities. Take for example, one of the first disciples called by Jesus who was Andrew, Simon Peter’s brother. The scriptures record how Andrew sought out his brother shortly after encountering Jesus as noted in John 1:41, “He first findeth his own brother Simon, and saith unto him, We have found the Messias, which is, being interpreted, the Christ.” [John 1:41]

Or consider when Jesus encountered a woman of Samaria at Jacob’s well and had a most interesting discussion with her on eternal life. During the conversation, the woman made this comment in reference to the coming Messiah, “The woman saith unto him, I know that Messias cometh, which is called Christ: when he is come, he will tell us all things.” [John 4:25] Little did she know at that time that she was talking to the long awaited Messiah who was sitting right next to her during a seemingly random and chance encounter at the water well. Upon hearing this comment from the woman of Samaria, Jesus helped to clarify who he was with this proclamation, “Jesus saith unto her, I that speak unto thee am [he.]” [John 4:26]

There was also another person noted early on in the New Testament who identified Jesus as the Christ while Jesus was still a young boy. This took place when his mother Mary and Joseph went into the temple. The man named Simeon was documented as follows in scripture, “And it was revealed unto him by the Holy Ghost, that he should not see death, before he had seen the Lord’s Christ.” [Luke 2:26] As God’s plan would have it, Simeon was about to meet the Lord’s Christ this day as noted in the next verse.

“And he came by the Spirit into the temple: and when the parents brought in the child Jesus, to do for him after the custom of the law, Then took he him up in his arms, and blessed God, and said, Lord, now lettest thou thy servant depart in peace, according to thy word: For mine eyes have seen thy salvation.” [Luke 2:27] This collection of verses represents such a crucial association of Jesus as the Lord’s Christ, as the one who would bring salvation to the world.

This week’s scripture reading called thou art the Christ, the Son of the living God is also recorded in two other gospel accounts from Mark 8:29 and Luke 9:20. This helps to further authenticate the veracity of the event and the declaration that Peter made when asked by Jesus, “whom do men say that I the Son of man am”? Jesus made it very clear by his own admission that not only was he the Son of man in the scriptures but he was also the Messiah or the Christ, the anointed one.

Let us now transition this study into the the next declaration made by Simon Peter when he makes the statement to Jesus that not only is he the Christ but he is also the Son of the living God. While the title of Messiah or Christ may perhaps come with different meanings and interpretations from a Jewish or Christian perspective, the title Son of the living God demonstrates the deity of Jesus.

Why is this so? Well, if one is the son of something then they are the same as the progenitor. For instance, when Jesus called the heavenly Father his father, the Jews knew exactly what he implied as documented, “Therefore the Jews sought the more to kill him, because he not only had broken the sabbath, but said also that God was his Father, making himself equal with God.” [John 5:18] Jesus as the Son of God is indeed equal with God because he is God.

Consider also in the book of Hebrews how the begotten Son is noted accordingly. First the writer records the contextual relationship of the Son to God the Father, “God, who at sundry times and in divers manners spake in time past unto the fathers by the prophets, Hath in these last days spoken unto us by [his] Son, whom he hath appointed heir of all things, by whom also he made the worlds; Who being the brightness of [his] glory, and the express image of his person, and upholding all things by the word of his power, when he had by himself purged our sins, sat down on the right hand of the Majesty on high.” [Heb. 1:2-4] Clearly, based on this description, Jesus was no mere man given that he made the worlds and upholds all things by the word of his power.

The writer of Hebrews concludes these opening statements by placing the hierarchy of Jesus far above the angels as shared, “Being made so much better than the angels, as he hath by inheritance obtained a more excellent name than they.” [Heb. 1:5] Finally, he concludes this bold statement from the Father, “For unto which of the angels said he at any time, Thou art my Son, this day have I begotten thee? And again, I will be to him a Father, and he shall be to me a Son?” [Heb. 1:6]

To return now back to Simon’s declaration on the title of this study, thou are the Christ, “the Son of the living God”, the above scriptural references help to further support and substantiate this description of Jesus. Simon was identifying Jesus as God. This is why the scriptures bear repetition of this phrase throughout the New Testament.

Consider when the disciples saw that even the wind and the waves obeyed the commands of Jesus, there was little left for them to do but to declare this same statement, “Then they that were in the ship came and worshipped him, saying, Of a truth thou art the Son of God.” [Matt. 14:33]

When it was noted how many of the disciples left Jesus and stopped following him, the proclamation from Peter was once again at the forefront as noted, “From that [time] many of his disciples went back, and walked no more with him. hen said Jesus unto the twelve, Will ye also go away? Then Simon Peter answered him, Lord, to whom shall we go? thou hast the words of eternal life. And we believe and are sure that thou art that Christ, the Son of the living God.” [John 6:66-69]

When Martha understood that Jesus would raise her brother Lazarus from the dead, there was little else for her to do but to declare, “She saith unto him, Yea, Lord: I believe that thou art the Christ, the Son of God, which should come into the world.” [John 11:27] When Nathanael stood before Jesus and heard how Jesus saw him before he even met him, there was little else for him to do but to state, “Nathanael answered and saith unto him, Rabbi, thou art the Son of God; thou art the King of Israel.” [John 1:49]

When Philip witnessed to the inquiring Eunuch about the scriptures from Isaiah, there was little else for him to do but to ensure the man made the declaration of faith as noted, “And Philip said, If thou believest with all thine heart, thou mayest. And he answered and said, I believe that Jesus Christ is the Son of God.” [Acts 8:37]

When Saul had a miraculous encounter with the Lord Jesus on the road to Damascus and then returned to the towns, there was little else for him to do but to proceed in declaring to the people as noted, “And straightway he preached Christ in the synagogues, that he is the Son of God.” [Acts 9:20]

Let us close off this study called thou are the Christ, the Son of the living God. Dear readers and seekers of faith, this pattern repeats itself over and over for one very good reason, that Jesus is the Christ, the Son of the living God. This is the declaration of the Christian faith. Christianity is not however simple intellectual acknowledgement of this fact. Christianity is believing in Jesus as the only atoning sacrifice for your sins by his death on the cross, his burial and resurrection from the dead (1 Cor. 15:3-5).

Will you make this decision for Christ, will you declare him as the Christ, the Son of the living God? This is the test of true and authentic faith. The apostle John rightly proclaims this in one of his letters from, “Whosoever shall confess that Jesus is the Son of God, God dwelleth in him, and he in God.” [1 John 4:15]

It is the Lord Jesus Christ himself who proclaims to the apostle John with the unequivocal statement of eternal omnipotence, “I am Alpha and Omega, the beginning and the ending, saith the Lord, which is, and which was, and which is to come, the Almighty.” [Rev. 1:8]

There once was a time of doubt in the life of John the Baptist when he said to the disciples of Jesus, “And said unto him, Art thou he that should come, or do we look for another?” [Matt. 11:3] Look no further seekers of faith, for it is Jesus who is calling you to come to him in faith for eternal life. Let us close with these verses from the apostle John as he once again makes this declaration of faith from this passage of scripture.

WORD GUIDE – * (Christ – the Messiah, or anointed one) * (Messias – of Hebrew origin for Messiah) * (the Christ – Greek for the Messiah)