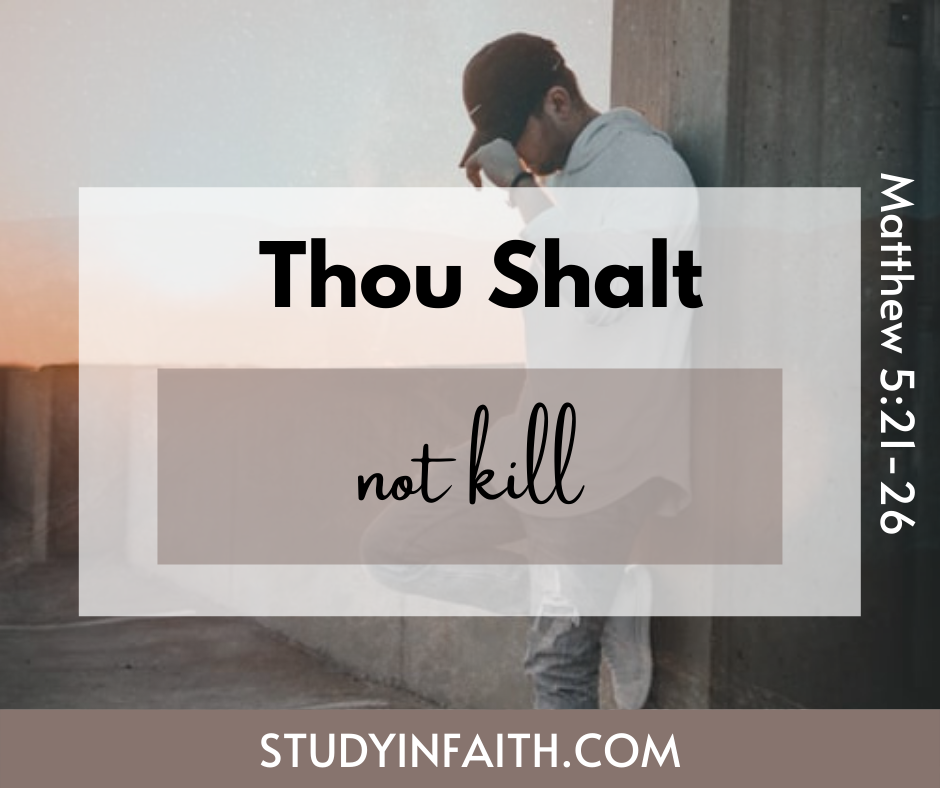 There is a deeper meaning to thou shalt not kill but first let us explore some background scripture for better context. The first recorded killing in scripture is noted in this passage, “And Cain talked with Abel his brother: and it came to pass, when they were in the field, that Cain rose up against Abel his brother, and slew him.” [Gen. 4:8] Sadly, this was also the very first family noted in scripture. Killing, like every other sin committed before the eyes of God, originated with the fall of mankind as recorded throughout the third chapter of Genesis.

There were some surprisingly notable individuals throughout scripture who killed people or had people killed on their behalf. Moses for example, committed this very sin, “And he said, Who made thee a prince and a judge over us? Intendest thou to kill me, as thou killedst the Egyptian? And Moses feared, and said, Surely this thing is known.” [Ex. 2:14] King David was also responsible for a killing, albeit through a malicious and fateful directive given to his military subordinates, “And he wrote in the letter, saying, Set ye Uriah in the forefront of the hottest battle, and retire ye from him, that he may be smitten, and die.” [2 Sam. 11:15] The next Bible study will highlight the immoral and unjustified cause that preceded David’s directive of Uriah’s death.

In the New Testament, Saul, who later became known as Paul was complicit in the murder of Stephen who was stoned for preaching the gospel, “And when the blood of thy martyr Stephen was shed, I also was standing by, and consenting unto his death, and kept the raiment of them that slew him.” [Acts 22:20] All of these individuals however, went on to become incredible people of faith before the Lord and in the presence of their people.

Despite these noted acts of murder, God’s word is clear in this regard as part of the Ten Commandments, “Thou shalt not kill.” [Ex. 20:13] Further to this, the sovereign penalty for killing someone was outlined in this passage, “He that smiteth a man, so that he die, shall be surely put to death.” [Ex. 21:12] For the Israelites, there was to be no misunderstanding of the consequential fallout from committing such an act upon one of their fellow countrymen.

The Motive behind the act

In this week’s scripture reading, Jesus is drawing on these passages to illustrate how the law should truly be fulfilled. As he noted earlier to this, he affirmed that he came to fulfill the law, “Think not that I am come to destroy the law, or the prophets: I am not come to destroy, but to fulfil.” [Matt. 5:17] The notable distinction in Jesus’ comments now gives more depth to the law over and above the singular act of transgression. In the case of thou shalt not kill, Jesus was emphasizing the inner thoughts that foreshadow the very act; more specifically in this situation, being angry without a cause. This did not mean to redefine the law but to place it in a different and more contemplative light since anger is an emotion that can serve as a very strong catalyst for such an unfortunate circumstance.

In looking back on the situation between Cain and Abel, this also reflects the point Jesus is making in this week’s scripture, “But unto Cain and to his offering he had not respect. And Cain was very wroth, and his countenance fell. And the LORD said unto Cain, Why art thou wroth? and why is thy countenance fallen?” [Gen. 4:5-6] While the word wroth is no longer used in today’s culture, its meaning is nevertheless very relevant to the case Jesus was making. Being wroth means to blaze with anger, having extreme jealousy, to wax hot as being incensed and literally burning with anger. This was the emotion that preceded the murder of Abel; the motive behind the act.

A second example of this occurrence where anger took place before committing murder is found when a Roman leader was threatened upon hearing that a king of the Jews had been born, “Then Herod, when he saw that he was mocked of the wise men, was exceeding wroth, and sent forth, and slew all the children that were in Bethlehem, and in all the coasts thereof, from two years old and under, according to the time which he had diligently enquired of the wise men.” [Matt. 2:16] This level of anger left unchecked, most often leads to regrettable actions and consequences.

In the wisdom of Solomon, this correlation with anger is also noted, “An angry man stirreth up strife, and a furious man aboundeth in transgression.” [Prov. 29:22] The perils of this type of anger is also recorded, “Be not hasty in thy spirit to be angry: for anger resteth in the bosom of fools.” [Eccl.7:9] Further wisdom is then noted, “[He that is] soon angry dealeth foolishly: and a man of wicked devices is hated.” [Prov. 14:17] Anger without a cause therefore is the distinguishing point Jesus is making here since this anger is transgression of the commandment and the deeper meaning of thou shalt not kill within a person’s heart, long before it is ever committed.

Although heinous acts of this nature have occurred since the beginning of mankind they are never far away from the eyes of the Lord, “God judgeth the righteous, and God is angry [with the wicked] every day.” [Ps. 7:11] What is often done in anger, whether committed in daylight or darkness, it is indeed never missed by the Lord, “For the eyes of the Lord [are] over the righteous, and his ears [are open] unto their prayers: but the face of the Lord [is] against them that do evil.” [1 Pet. 3:12] God is fully aware of everything that takes place within a sin filled world, “For the eyes of the LORD run to and fro throughout the whole earth, to shew himself strong in the behalf of [them] whose heart [is] perfect toward him.” [2 Chron. 16:9]

This mindset of anger is apparent to the Lord regardless of whether people realize it or not, “…for man looketh on the outward appearance, but the LORD looketh on the heart.” [1 Sam. 16:7b] In the teachings from God, anger is an emotion that does occur but it must be for cause and it must be tempered, “A wrathful man stirreth up strife: but [he that is] slow to anger appeaseth strife.” [Prov. 15:18] Foolish anger though is something people of faith should avoid at all cost, nor even associate with, if evidenced in other people, “Make no friendship with an angry man; and with a furious man thou shalt not go: Lest thou learn his ways, and get a snare to thy soul.” [Prov. 22:24-25]  Hopefully, readers are starting to see the many aspects of the deeper meaning of thou shalt not kill.

Interestingly and not surprisingly, there are notable affiliations listed in scripture where anger and killing are among other sorrowful actions and character traits. Take for instance this passage from one of the ancient prophets, “Will ye steal, murder, and commit adultery, and swear falsely, and burn incense unto Baal, and walk after other gods whom ye know not.” [Jer. 7:9] Such improper company and conduct is also noted in the New Testament, “For I fear, lest, when I come, I shall not find you such as I would, and [that] I shall be found unto you such as ye would not: lest [there be] debates, envyings, wraths, strifes, backbitings, whisperings, swellings, tumults.” [2 Cor. 12:20] It is far more fitting for people of faith to pursue and desire temperance in their own character, “Wherefore, my beloved brethren, let every man be swift to hear, slow to speak, slow to wrath: For the wrath of man worketh not the righteousness of God.” [Jam. 1:19-20]

To close off this Bible study on the deeper meaning of thou shalt not kill, as Jesus noted above in this week’s scripture reading, the act of reconciliation serves as a fundamental backdrop for diffusing anger. This is the example from Jesus himself as Paul wrote, “And all things [are] of God, who hath reconciled us to himself by Jesus Christ, and hath given to us the ministry of reconciliation.” [2 Cor. 5:18-19] Paul also embellishes upon this reconciliatory nature further, “To wit, that God was in Christ, reconciling the world unto himself, not imputing their trespasses unto them; and hath committed unto us the word of reconciliation. Now then we are ambassadors for Christ, as though God did beseech [you] by us: we pray [you] in Christ’s stead, be ye reconciled to God. For he hath made him [to be] sin for us, who knew no sin; that we might be made the righteousness of God in him.” [2 Cor. 5:19-21]

This Bible study dealt with a most serious and often tragic subject in the world. Let us always remember where unjustified anger comes from through its darkest origin in sin and Satan, who is the only celebrant of such heinous acts, “Be ye angry, and sin not: let not the sun go down upon your wrath:  Neither give place to the Devil.” [Eph. 4:26-27]