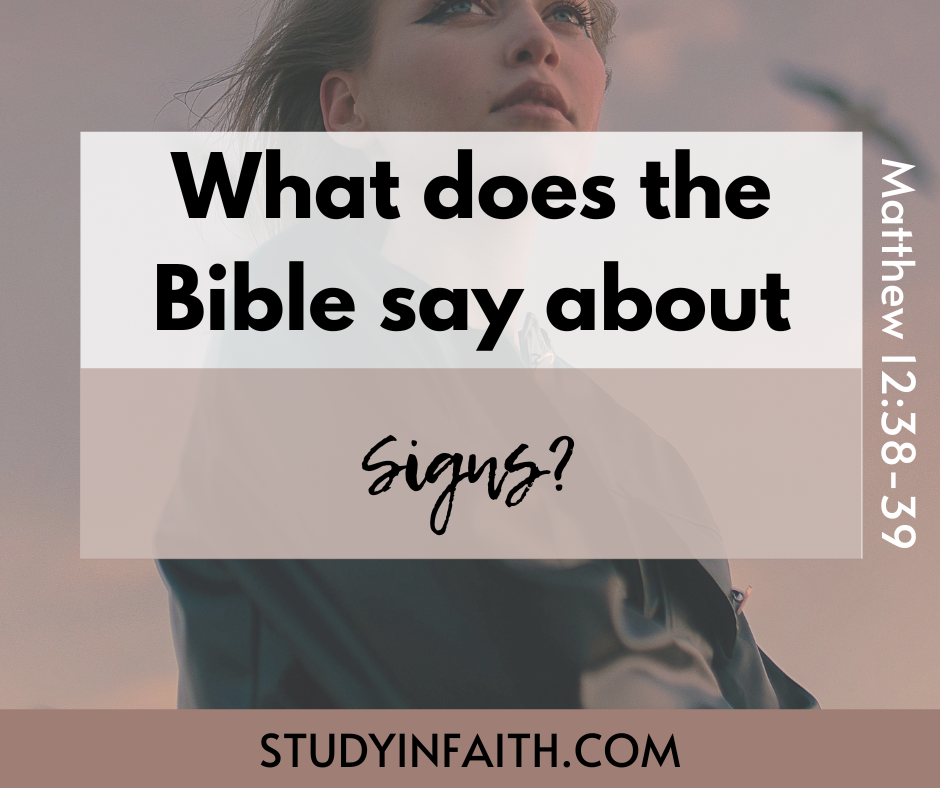 Then certain of the scribes and of the Pharisees answered, saying, Master, we would see a sign from thee. But he answered and said unto them, An evil and adulterous generation seeketh after a sign; and there shall no sign be given to it, but the sign of the prophet Jonas:

Hypocrisy of the Pharisees

This passage of scripture on what does the Bible say about signs marks the hypocrisy of the Pharisees who were the religious leaders from that period. A quick scan of this chapter will show the previous time the Pharisees spoke to Jesus was after seeing him perform a miracle to heal a man afflicted with devil possession; also described as blind and dumb. Their comment was a blasphemous accusation against Jesus as they attributed this miraculous healing with the power from Beelzebub, the prince of devils.

It was then after a lengthy rebuttal from Jesus over their ill-founded accusation when they approached him again seeking a sign. While this study stems from the passage in Matthew, it is important for context to consider how other gospel writers documented the events. For example, Luke ties the two encounters right together giving further emphasis on their hypocrisy, “But some of them said, He casteth out devils through Beelzebub the chief of the devils. And others, tempting [him,] sought of him a sign from heaven.” [Luke 11:15-16]

Let us jump over to another gospel writer where the same events are recorded to further corroborate witness to the event, “And the Pharisees came forth, and began to question with him, seeking of him a sign from heaven, tempting him. And he sighed deeply in his spirit, and saith, Why doth this generation seek after a sign? verily I say unto you, There shall no sign be given unto this generation.” [Mark 8:11-12] The subject of what does the Bible say about signs indeed tends to become a notable topic of discussion in scripture.

To further illustrate that this was simply not a one-off episode by the Pharisees and Jews, they were also recorded by the apostle John on two different occasions, “Then answered the Jews and said unto him, What sign shewest thou unto us, seeing that thou doest these things? ” [John 2:18] The pattern was always one of seeking signs before believing in Jesus.

As time progressed, it was recorded once again with the Jews asking for a sign, “They said therefore unto him, What sign shewest thou then, that we may see, and believe thee? what dost thou work? ” [John 6:30] The interesting storyline in this case was how the Jews tried to explain how the manna from heaven as documented in Exodus was something they were looking for from Jesus. But Jesus was quick to rebut their ill fated logic since they continually failed to see that the real bread of life was sent by the Father. Jesus shared with them that the bread from God was he who came down from heaven and gives life to the world (John 6:33).

Interestingly, some of the people called him Lord right after that and asked him for this bread perhaps not knowing what he meant. John then records one of the most compelling and profound proclamations from Jesus as he reveals to the multitudes who he really is, “And Jesus said unto them, I am the bread of life: he that cometh to me shall never hunger; and he that believeth on me shall never thirst. But I said unto you, That ye also have seen me, and believe not.” [John 6:34-36] Clearly, this was no mere man standing before them saying frivolous words of religiosity; rather this was indeed the Lord of glory from heaven!

While we will not delve too deeply into some of the responses Jesus gave during this week’s passage, it is important to note how Jesus associated his earthly presence and eventual death, burial and resurrection with Old Testament scripture. After calling them an evil generation he describes how no sign will be given to them but the sign of the prophet from Jonas. This he likened to himself in reference to how Jonas was in the great fish for three days, so shall the Son of man be in the earth with his own death (Luke 11:29-30, Matt. 16:3-4). This is a notable reference on what does the Bible say about signs since this was a pivotal sign for the Jews to understand about him.

When learning about what does the Bible say about signs we shall see that even the seeking of signs can even afflict doubting disciples of Jesus. This was noted further on in Matthew just before a notable preaching message from Jesus, “And as he sat upon the mount of Olives, the disciples came unto him privately, saying, Tell us, when shall these things be? and what [shall be] the sign of thy coming, and of the end of the world?” [Matt. 24:3] As this message unfolded, Jesus indicated the sign will ultimately be given from heaven with himself as the Lord Jesus Christ returning, “And then shall appear the sign of the Son of man in heaven: and then shall all the tribes of the earth mourn, and they shall see the Son of man coming in the clouds of heaven with power and great glory.” [Matt. 24:30]

In closing this Bible study on what does the Bible say about signs, perhaps it is time to ask the question of yourself, are you waiting for a sign from God or from heaven before you make a decision to believe in him? if so, give serious contemplation over this, for it was in Jesus’ own words when he spoke about this very point, “Then said Jesus unto him, Except ye see signs and wonders, ye will not believe.” [John 4:48] As the apostle Paul stated in his letter to the Corinthian church there was a prevailing challenge with many who sought signs from God, “For the Jews require a sign, and the Greeks seek after wisdom: But we preach Christ crucified, unto the Jews a stumblingblock, and unto the Greeks foolishness.” [1 Cor. 1:22-23]

There will indeed be a sign from heaven but for those who insist on waiting for such a sign, the evidence of such will be too little too late for many. For reference on this, here is the last time the word sign is noted in scripture but this also marks the judgment upon the nations, “And I saw another sign in heaven, great and marvellous, seven angels having the seven last plagues; for in them is filled up the wrath of God.” [Rev. 15:1] Why not make the decision today to believe in the Lord Jesus Christ, for it is in him where redemption lies from redemption of your sins through his atoning death, burial and resurrection. That sign was demonstrated over two thousand years ago by Jesus for all mankind to come to him in faith!