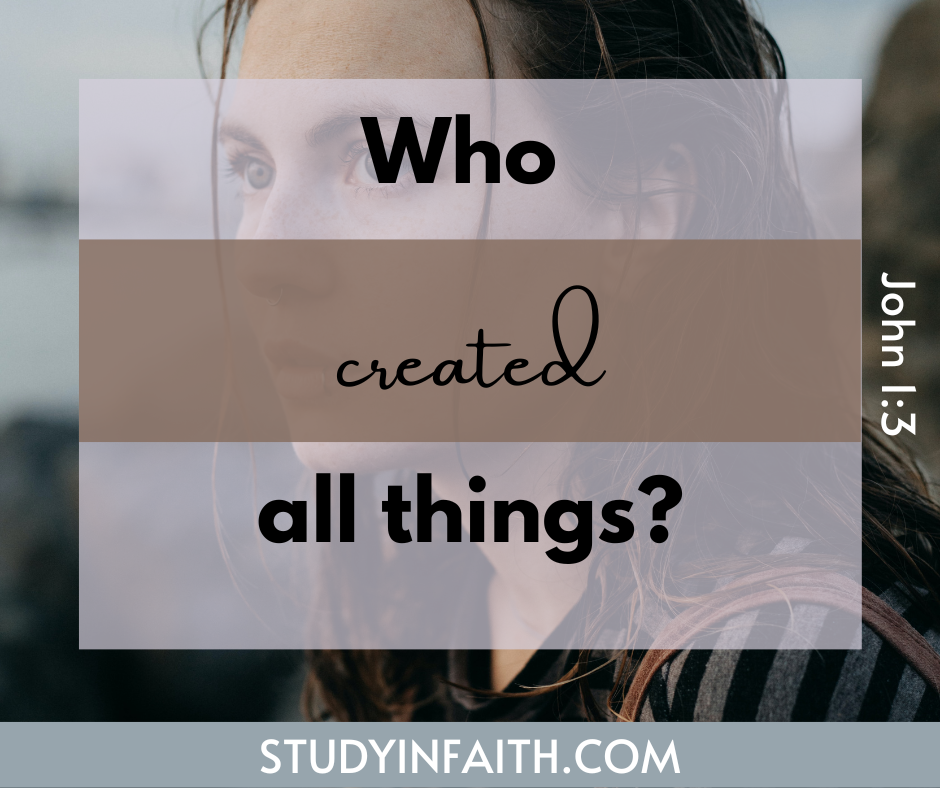 All things were made by him; and without him was not any thing made that was made.

The Son and the Father

In this Bible study called who created all things we will discover the incredible relationship between the Son of God and the heavenly Father. This quickly becomes evident from many scriptural references where both the Son of God and the heavenly Father are described as being collaboratively responsible for creation. In essence, this becomes an interrelationship where one person of the Godhead does nothing without involvement from the other person of the Godhead. Take for example this scripture passage from one of the apostle Paul’s letters, “But to us there is but one God, the Father, of whom are all things, and we in him; and one Lord Jesus Christ, by whom are all things, and we by him.” [1 Cor. 8:6] The Son’s relationship to the Father is interwoven throughout scripture and depicts a relationship within a divine community.

Creation through the Son

Let us see evidence of this in more scripture to further support the case for the interrelationship between the Son of God and the heavenly Father when it is stated. “And to make all men see what is the fellowship of the mystery, which from the beginning of the world hath been hid in God, who created all things by Jesus Christ:” [Eph. 3:9] In this passage of scripture, their relationship is described as the fellowship of the mystery between God and Jesus Christ. Here, the process of creation is initiated by God but Jesus Christ is the one who executes upon this mandate from the heavenly Father.

Another passage of scripture describes this almost in an incidental way after noting how the explicit role of the Son has come in the New Testament, “Hath in these last days spoken unto us by his Son, whom he hath appointed heir of all things, by whom also he made the worlds;” [Heb. 1:2] The use of the word “also” in this passage almost comes with a sense of humour in that the creation of the worlds is incidental to the Son being appointed as the God-man representative and appointed as heir of all things! But in reality, the order of things and events clearly indicates from Genesis onwards that creation preceded everything, “In the beginning God created the heaven and the earth.” [Gen. 1:1]

The sheer magnitude of creation through Jesus Christ is of epic and staggering proportions. Take note of key concepts in this passage from Paul – Heaven. Earth. Visible. Invisible. All things were created. “For by him were all things created, that are in heaven, and that are in earth, visible and invisible, whether they be thrones, or dominions, or principalities, or powers: all things were created by him, and for him:” [Col. 1:16] These are all encompassing and absolute terms used to describe the creative works through Jesus Christ. The magnitude of his creative work is succinctly phrased from the more literal translation from the Greek language, “All things through him came into being, and without him came into being not even one thing which has come into being.” Not even one thing!

With this context in place for the Bible study, let us now connect two key verses from the Old and New Testament to bring further prominence to Jesus Christ. The first passage of scripture is from the prophet Isaiah who wrote as he was guided by the Lord with this notable verse illustrating how it is the Lord who is the creator of all things, “Thus saith the LORD, thy redeemer, and he that formed thee from the womb, I am the LORD that maketh all things; that stretcheth forth the heavens alone; that spreadeth abroad the earth by myself;” {Is. 44:24] Much like an artist working with his painter’s palette, the Lord is indeed the one from scripture who created all things whether visible or invisible.

The disciples of Jesus had a tall order in preaching and convincing the skeptical Jews who always insisted on seeing signs from heaven before they would believe anything about Jesus and the gospel message. Note though the series of events that took place. After the disciples of Jesus were given the Holy Spirit they began to speak in several languages as described in this passage, “Parthians, and Medes, and Elamites, and the dwellers in Mesopotamia, and in Judaea, and Cappadocia, in Pontus, and Asia, Phrygia, and Pamphylia, in Egypt, and in the parts of Libya about Cyrene, and strangers of Rome, Jews and proselytes, Cretes and Arabians, we do hear them speak in our tongues the wonderful works of God.” [Acts 2:9-11]

When the skeptical Jews heard all of these languages being spoken, the reaction was a blend of amazement and mocking of them, thinking that they were all drunk with wine. This was quickly refuted however given that it was early in the morning. The apostle Peter then stood up and began a notable preaching message to the Jewish audience by referencing scripture from the Old Testament to help illustrate how Jesus Christ was the fulfillment of the scriptures. As Peter concluded his preaching message to the Jews, he stated emphatically his closing argument, “Therefore let all the house of Israel know assuredly, that God hath made that same Jesus, whom ye have crucified, both Lord and Christ.” {Acts 2:36]

Do you now see the connection from Isaiah’s prophetic writings from the Old Testament and Peter’s statement in the New Testament according to the scriptures? The Jews had no idea that Jesus Christ was actually the Lord from the Old Testament. This was a revelation to them and it would have been incredibly stunning to learn of this after having participated in influencing the Roman authorities to crucify Jesus. This is why the Jews were recorded as having the following reaction after Peter told them who Jesus Christ was from the scriptures, “Now when they heard this, they were pricked in their heart, and said unto Peter and to the rest of the apostles, Men and brethren, what shall we do? Then Peter said unto them, Repent, and be baptized every one of you in the name of Jesus Christ for the remission of sins, and ye shall receive the gift of the Holy Ghost.” [Acts 2:37-38] The use of the phrase, “pricked in their heart” is illustrative of being convicted in their heart over realizing what they had done and that Jesus Christ was the Lord.

The world knew him not

Let us close off this Bible study on who created all things by noting something more astonishing than the reaction of the Jews from Peter’s preaching. Not everyone who hears the words of the Lord Jesus Christ and the gospel message will become proverbially pricked in their heart. Did you know the apostle John wrote about this in the same passage that described how Jesus made the world? Sadly, he ended the same passage as noted, “He was in the world, and the world was made by him, and the world knew him not.” [John 1:10] The world did not even comprehend who Jesus was as shared in this verse by John, “In him was life; and the life was the light of men. And the light shineth in darkness; and the darkness comprehended it not.” [John 1:4-5]

Walked no more with him

So here you have the Lord Jesus Christ proclaiming to his disciples in all his glory from verses such as this one, “And Jesus came and spake unto them, saying, “All power is given unto me in heaven and in earth.” [Matt. 28:18] He did not have some, or partial, or limited power, he had all power from the heavenly Father in heaven and earth. Despite this display of omnipotence before his disciples it was at one time documented from the scriptures, “From that time many of his disciples went back, and walked no more with him.” [John 6:66] The last part of this passage merits a second read, “and walked no more with him.”

The decision to walk away from the Lord of glory, the Lord Jesus Christ, the creator of heaven and earth, the creator of all things where not even one thing that was made without him, and yet some chose to walk no more with him. Tragically, this same decision is made every day in our modern world by people from all walks of life. Yet, it is Jesus whom the scriptures describe, “For of him, and through him, and to him, are all things: to whom be glory for ever. Amen.” [Rom. 11:36] What about you? Will you walk no more with him or will you acknowledge him as the Lord Jesus Christ and believe on his name, for his atoning sacrifice for your sins? Why not make the decision to walk each day with him into eternity!