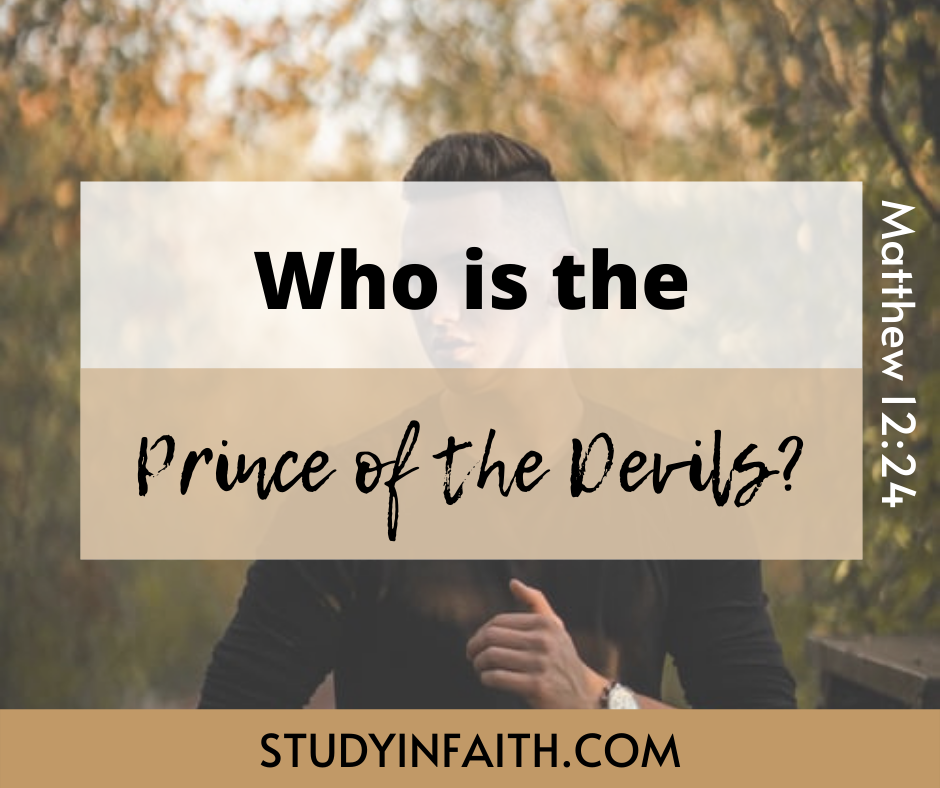 But when the Pharisees heard [it,] they said, This [fellow] doth not cast out devils, but by Beelzebub the prince of the devils.

In this Bible study on who is the prince of devils, it is quite incomprehensible to read how the religious leaders at that time ascribed the miraculous works of Jesus to Beelzebub, the prince of devils. Clearly, this was a period of religious depravity and an early form of creating a false narrative among the multitudes. After all, if the esteemed religious elite described Jesus as deriving his power from darkness was it any wonder many of them failed to see Jesus as the light of the world? For an additional witness to this event, it was also documented by the apostle Luke, “But some of them said, He casteth out devils through Beelzebub the chief of the devils.” [Luke 11:15] Mark was another other disciple to make record of this event as shown in Mark 3:22.

In response to this false accusation, Jesus was quick to refute and rebuke the Pharisees for their ill fated comments toward him by saying, “If Satan also be divided against himself, how shall his kingdom stand? because ye say that I cast out devils through Beelzebub. And if I by Beelzebub cast out devils, by whom do your sons cast [them] out? therefore shall they be your judges.” [Luke 11:18] Beelzebub was another name in scripture for Satan and it is only recorded seven times in the New Testament by Matthew, Mark and Luke.

Jesus also used this false accusation to teach his disciples about the persecution they were to experience and suffer, “It is enough for the disciple that he be as his master, and the servant as his lord. If they have called the master of the house Beelzebub, how much more [shall they call] them of his household?” [Matt. 10:25] Indeed, the point Jesus was making illustrated that if the Pharisees had the audacity to associate the Son of God with Beelzebub then they would treat the disciples with the same or worse level of disrespect.

Far from a Prince

This passage of scripture presents a bit of an oxymoron by calling Beelzebub or Satan a prince. Indeed he was the prince of devils but to label him as a prince, typically reserved for nobility, appears to be quite contradictory. Nevertheless, this was the title also ascribed to him by Jesus when he said, “Now is the judgment of this world: now shall the prince of this world be cast out.” [John 12:31] This was also repeated by Jesus shortly thereafter, “Hereafter I will not talk much with you: for the prince of this world cometh, and hath nothing in me.” [John 14:30] And again, once more using this most interesting title for the darkness of this world, “Of judgment, because the prince of this world is judged.” [John 16:11]

In looking through Old Testament scriptures, there is also a description given of Satan in a similar way when he is likened to a false god, “Son of man, say unto the prince of Tyrus, Thus saith the Lord GOD; Because thine heart [is] lifted up, and thou hast said, I [am] a God, I sit [in] the seat of God, in the midst of the seas; yet thou [art] a man, and not God, though thou set thine heart as the heart of God.” [Ezek. 28:2] This verse describes a heart filled with pride and arrogance and its consequential and fateful effect upon an individual in life.

Another prophetic reference to Satan was written by Isaiah with notable similarities to the passage from Ezekiel, “How art thou fallen from heaven, O Lucifer, son of the morning! [how] art thou cut down to the ground, which didst weaken the nations! For thou hast said in thine heart, I will ascend into heaven, I will exalt my throne above the stars of God: I will sit also upon the mount of the congregation, in the sides of the north: I will ascend above the heights of the clouds; I will be like the most High. Yet thou shalt be brought down to hell, to the sides of the pit.” [Is. 14:12-15] Here in this passage, Satan is called Lucifer and it notes the sorrowful condition of his heart filled with arrogance and self exaltation; attempting to thwart God’s holy reign in the process. This scripture also aligns with the statement from Jesus when he stated, “I beheld Satan as lightning fall from heaven.” [Luke 10:18]

The Prince of Life

With this context presented on the prince of devils, otherwise known as Beelzebub and Satan, let us now transition and look at a far more notable prince as described in scripture. This is none other than the Lord Jesus Christ and in this case, Jesus is described by the most noble of titles as said by Peter while witnessing to the Jews, “And killed the Prince of life, whom God hath raised from the dead; whereof we are witnesses.” [Acts 3:15] This forms part of a larger scriptural passage in which Peter appealed to the Jews over their lack of understanding that Jesus was Lord was in the scriptures.

Further on in similar fashion, Peter once again presented Jesus as a prince when speaking to the chief religious rulers who were forbidding the disciples to preach in the name of Jesus, “Him hath God exalted with his right hand [to be] a Prince and a Saviour, for to give repentance to Israel, and forgiveness of sins.” {Acts 5:31] This title given to Jesus continued right through to the last book in scripture, “And from Jesus Christ, [who is] the faithful witness, [and] the first begotten of the dead, and the prince of the kings of the earth. Unto him that loved us, and washed us from our sins in his own blood,” [Rev. 1:5]

The Prince of Peace

It should therefore come as no surprise in referencing one of the most notable prophetic verses about Jesus from Isaiah. Here Jesus is given many honourable titles, including the acknowledgement of his eternal deity and also the Prince of Peace, “For unto us a child is born, unto us a son is given: and the government shall be upon his shoulder: and his name shall be called Wonderful, Counsellor, The mighty God, The everlasting Father, The Prince of Peace.” [Is. 9:6]

With that said, now contrast this one last time back to nature of Satan as Paul describes him not only as a prince but also the spirit that works in unbelievers in the world, “Wherein in time past ye walked according to the course of this world, according to the prince of the power of the air, the spirit that now worketh in the children of disobedience.” [Eph. 2:2]

To close off this Bible study on who is the prince of the devils, it is now quite clear who this represents in scripture as the arch enemy of the Lord Jesus Christ. Jesus is the Prince of Life and Prince of Peace. As readers of this study take time for reflection, perhaps now is an opportunity to ask yourself this question, which prince are you serving in life? Is it the prince of this world who is filled with darkness, or is it the prince of life who is the light of the world (John 8:12.

Why not believe in Jesus, for it is he who offers you eternal life through his death, burial and resurrection on the cross? Jesus came that you might have life. He contrasted himself with the thief, or more aptly known as Satan in this last passage of scripture, “The thief cometh not, but for to steal, and to kill, and to destroy: I am come that they might have life, and that they might have [it] more abundantly.” [John 10:10] How about you? Will you come to Jesus to have life more abundantly?