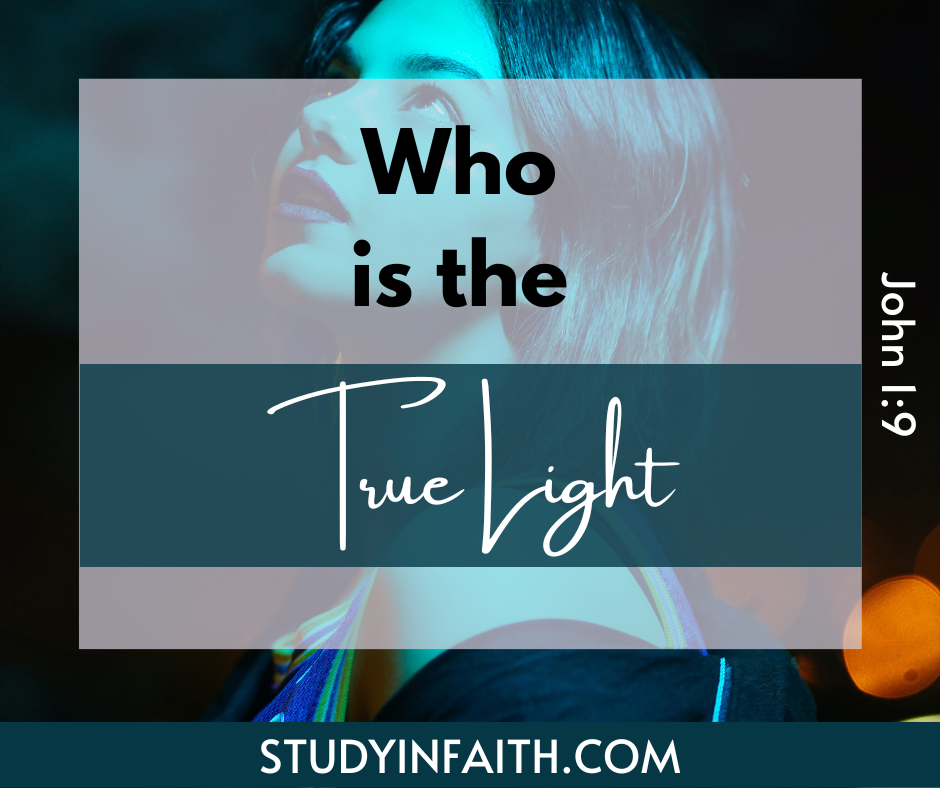 That was the true Light, which lighteth every man that cometh into the world.

In this passage of scripture on who is the true light there are many points that come to light, no pun intended! For this Bible study, the focus will be on one key word pertaining to the Lord Jesus Christ as John described him and that is the “true” light. The word true is often used in reference to describe Jesus and we will discover this in many scriptures from the Bible. The use of the word true brings importance to Jesus in many ways. In a world filled with corruption throughout religion, politics and organizations, anything with genuine and authentic truth should merit our attention. Let us therefore start out with two bold scriptural references that identify Jesus as the true Lord and true God.

From ancient prophecy as recorded in the Old Testament, the prophet Jeremiah quoted this statement from the Lord God in his writings, “But the LORD is the true God, he is the living God, and an everlasting king: at his wrath the earth shall tremble, and the nations shall not be able to abide his indignation.” [Jer. 10:10] This marks a profound statement of truth for readers of scripture as it identifies the Lord as the “true” God of the scriptures. Further to this, it identifies the attributes of everlasting to the Lord God and that he is the living God, meaning he is not some type of false god that once existed in the past. He is rather, the everlasting, living Lord God of the scriptures.

Now, fast forward several centuries after this proclamation to the time Jesus is persecuted, crucified, buried, resurrected and subsequently ascended into heaven. Here you now have the apostle Peter preaching boldly to a Jewish audience about who Jesus really was during his earthly ministry. At the conclusion of Peter’s long dissertation to the Jews, he makes this profound statement to them by stating, “Therefore let all the house of Israel know assuredly, that God hath made that same Jesus, whom ye have crucified, both Lord and Christ.” [Acts 2:36] After hearing this, an old phrase is used to describe the reaction of the Jews by stating that they were pricked in their heart, meaning this revelation and realization convicted them of the sin they committed by participating in his persecution and crucifixion.

Seekers of faith and believers should see the immediate connection between these two statements of truth in the scriptures. First, the Lord is the true God, second Jesus is both Lord and Christ. This is a comparative to one plus one equals two. In mathematics, the realm of absolutes reigns, meaning there can be no deviation to the mathematical equation at hand. Similarly, these truths connecting Jesus as Lord and God are absolutes, there is no deviation to the correlation whatsoever. It is either a yes or no acknowledgement and to say no, he is not is to refute the truths presented in the scriptures. One cannot place these profound truths about Jesus in limbo and move on with other aspects of Christianity. They are rather entryways into Christianity, the gateway, much like when Jesus proclaimed, “I am the way, the truth, and the life: no man cometh unto the Father, but by me.” [John 14:6]

Playing off this same theme of truth from the apostle John’s account of the gospel, he also wrote three short epistles to the early churches. In his first letter, John stated a similar proclamation about Jesus when he said, “Again, a new commandment I write unto you, which thing is true in him and in you: because the darkness is past, and the true light now shineth..” [1 John 2:8] Do you see the correlation between this verse from John in one of his letters to the church and his gospel account? The true light is Jesus, the true light is the Lord, the true light is God, the true light is the Lord Jesus Christ! Scripture does not speak in ambiguities or cryptic platitudes, it speaks in absolute truths about the everlasting God of all creation.

The apostle John continued with his congruent message about Jesus right through to the revelation as revealed to him by the Lord. This is portrayed in this verse, “And I saw heaven opened, and behold a white horse; and he that sat upon him was called Faithful and True, and in righteousness he doth judge and make war.” [Rev. 19:11] What a blessed statement to describe the Lord Jesus Christ amidst a world gone awry, to call him Faithful and True! Perhaps this scriptural reference from the apostle John will show the continuity of his message and theme in demonstrating that Jesus is the true Lord, the true God is shown in, “And we know that the Son of God is come, and hath given us an understanding, that we may know him that is true, and we are in him that is true, even in his Son Jesus Christ. This is the true God, and eternal life.” [1 John 5:20] This statement ends John’s first epistle by concluding that Jesus has come, that we are given understanding from him, that we may know him and most importantly that he is “the true God, and eternal life”.

It is of interest to note the use of the word true in the scriptures. True is used once in Matthew, Mark and Luke respectively, but 19 times in John! Take for example when John documents the words of Jesus when he describes himself, “I am the true vine, and my Father is the husbandman.” [John 15:1] Similarly, John quotes Jesus when he proclaims that he is the proverbial bread that came down from heaven, “Then Jesus said unto them, Verily, verily, I say unto you, Moses gave you not that bread from heaven; but my Father giveth you the true bread from heaven.” [John 6:32] (John 6:33-63)

Let us close this section of the study by noting one last scripture from the ancient prophet Isaiah when he states, “I am the LORD, and there is none else, there is no God beside me: I girded thee, though thou hast not known me:” [Is. 45:5] This verse is referenced because of its unequivocal proclamation that there is no one else aside from the Lord as God. Putting the above verses together, we can therefore confidently know that the declaration in the New Testament of Jesus as Lord identifies him as the Lord of the Old Testament. After all, it was the apostle John who opened his gospel account by stating that, “In the beginning was the Word, and the Word was with God, and the Word was God.” [John 1:1] The Word in this case is clearly referring to the Lord Jesus Christ.

With this context in place we will now transition over to the life of a believer in the Lord Jesus Christ for if he is the true God then we as his followers should live as true believers in him. The apostle Paul wrote of this on many occasions to help instill godly living and conduct that should become part of a Christian’s walk of faith. Take for example how he described this by saying, “And that ye put on the new man, which after God is created in righteousness and true holiness.” [Eph. 4:24] The new man in this verse refers to the new spirit in people which is born from above by God when they come to saving faith in Christ. Take particular note how Paul describes this new spiritual self as being created in righteousness and true holiness.

Paul helps to explain the true righteousness from God in one of his other letters by stating that it is not our own sense of righteousness that we think we can attain by human effort. Nothing in ourselves will ever produce the righteousness of God, it is rather imputed, or given to us, by God himself as Paul describes, “For he hath made him to be sin for us, who knew no sin; that we might be made the righteousness of God in him.” [2 Cor. 5:21] Paul is portraying the great miraculous exchange that occurs in believers when Jesus as the sinless lamb of God took our sin upon himself and in turn imputes his own righteousness upon us. This is something only the true and righteous God can do for us and the gateway to this is by believing in him (John 3:36).

The above list of character traits and pursuits toward godly living can only come however from a heart that is transformed by the Lord and this is reflected from another passage of scripture, “Let us draw near with a true heart in full assurance of faith, having our hearts sprinkled from an evil conscience, and our bodies washed with pure water.” [Heb. 10:22] A true heart is one that is in harmony with the one who is the true light in the scriptures. This must start however by believing in the Lord Jesus Christ for it was Jesus himself who proclaimed, “For God so loved the world, that he gave his only begotten Son, that whosoever believeth in him should not perish, but have everlasting life.” [John 3:16] This is everlasting life, in the Son of God, by believing in him for eternal salvation.

When new life takes place in a believer, we can then understand, appreciate and relate to the apostle Peter’s closing declaration from his first letter when he states, “But the God of all grace, who hath called us unto his eternal glory by Christ Jesus, after that ye have suffered a while, make you perfect, stablish, strengthen, settle you. To him be glory and dominion for ever and ever. Amen. …I have written briefly, exhorting, and testifying that this is the true grace of God wherein ye stand. [1 Peter 5:10-12] With that blessed truth upon us this is indeed worthy of an amen!